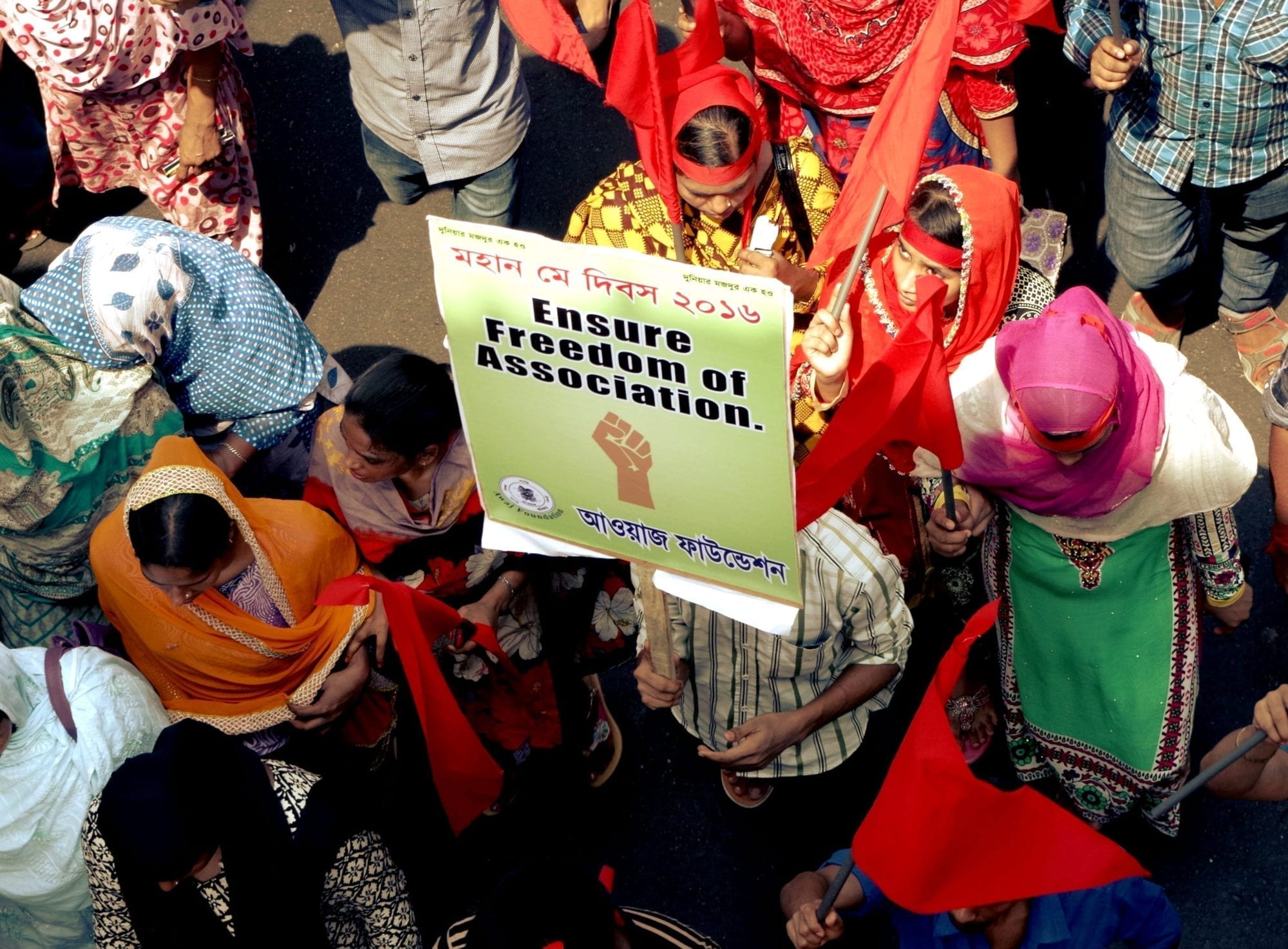 Workers in Bangladesh fight for the freedom of association on May Day 2016. Credit: Solidarity Center

Even as 11,000 Bangladesh garment workers were fired in the wake of strikes they waged in December and January to protest low wages, many seeking to form unions or take collective action also have been physically threatened, attacked and arrested on trumped-up charges. And union leaders say these employer-directed assaults often take the form of gender-based violence at work.

In testimony provided to the Solidarity Center by garment workers and union leaders, a pattern emerges in which women seeking to form unions or engage in collective action are especially targeted with actions to degrade, demean and intimidate them, and some have suffered physical attacks and rape.

“As we try to form unions, management is hostile against us,” says one garment worker. (Neither workers nor factories will be identified to protect workers against retaliation.) “They threaten me that, what if someone stops me in the road, what can I do as a woman?”

At one factory where workers walked out on January 7 to demand higher wages, police charged them and threw tear gas into the factory, injuring between 13 and 14 children in the ground floor day care. Managers later “sent out a list of all the mothers with babies and terminated them,” says one worker at the factory. “They did this so that they could close down the day care.”

On the same day, at another garment factory where workers say managers had harassed them ever since they submitted a union registration application in November, police beat workers with rods and sticks and “took away the scarves of women,” threatening to rape them, according to a worker’s eyewitness account.

While Bangladesh employers stepped up attacks directed at women workers during the recent walkouts, they have long used gender-based violence at work as a tactic to intimidate women active in union organizing. In November, hired criminals associated with management and local government officials attacked and raped a woman organizer at a factory in the midst of a campaign to form a union.

The harassment, assaults and arrests of garment workers this year amplifies an increasingly repressive environment for worker organizing that in recent years has included threatening home visits, kidnappings and mass termination.

In one recent example, workers at a garment factory saw their daily production quota increased to 400 pieces a day, up from 250 pieces after they filed with the government for union registration. Workers there say supervisors locked union committee members in bathrooms and hired local criminals to pursue them in the streets.

Even as employers exploit workers’ wage protests as a pretext for infringing on the rights of workers to organize and bargain collectively, government resistance to workers seeking to register unions further represses workers’ efforts to form unions and collectively bargain better wages and working conditions.

But now Bangladesh, which in 2018 the International Trade Union Confederation (ITUC) ranked as among the world’s 10 worst countries for worker rights, is on the verge of expelling the Accord on Fire and Building Safety in Bangladesh. Established after the Rana Plaza disaster, the legally binding agreement between hundreds of primarily European retail brands and unions conducted safety inspections at more than 1,000 factories and educated workers on safety and other workplace rights.

“We are poor. Just because we formed a union, we have been the victims,” says one worker at a factory where 200 workers were fired after they sought to register a union with the government. The worker says when management learned of their efforts to form a union, women were threatened with rape and men threatened with guns and knives.

“Our photos and fingerprints have been sent to all the factories, so we are not able to find jobs anywhere else. Blacklists are hanging in front of the factories,” she said.