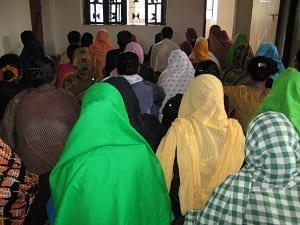 A garment union leader and her husband were brutally attacked in late August, marking the latest incident of apparent factory-sponsored violence against workers attempting to exercise their right to freedom of association and to just, safe jobs in Bangladesh’s garment factories.

In August 26 as Mira, acting union president at Global Trousers Ltd. in Chittagong, and her husband waited for the bus to take them home after work, several men—armed with iron rods, their faces hidden by handkerchiefs—violently attacked her. She was knocked unconscious following a blow to the head, and her husband, who rushed to help her, also suffered a beating. After the attack, Mira was rushed to a local hospital in critical condition.

The couple report that a low-level manager pointed Mira out to their attackers, and that the men shouted throughout the assault that they would kill the pair unless they resigned from the trade union and left the factory. Days earlier, workers said a group of men with knives were waiting for Mira outside the factory gates, though a change in her routine kept them from carrying out their plan.

In 2011, a new wave of organizing spread across Bangladesh after a long drought when no new independent unions were able to organize. At that time, workers at Global Trousers were among the first to try and organize a trade union—encountering intense resistance from their employer. Although the union met the legal requirements to be registered officially as a trade union, factory management contested its registration, which has since been working its way through the courts. The High Court ruled earlier this year that the case should be transferred to the country’s labor courts but that the union could now legally operate as a trade union inside the factory.

While only three of the original union leaders are left in the factory, union members have continued to persevere under the guidance and leadership of their trade union federation, Bangladesh Independent Garment Workers Union Federation (BIGUF). In the last several months, workers have recruited new members and established a union dues structure through which they are regularly collecting dues from members to continue to build a strong, sustainable organization.

However, management has strengthened its campaign against the union as well. In August, union leaders reported that managers at various levels within the factory told them they would face severe consequences for their activism. On August 22, another union leader reported that men, their faces disguised, dragged her and her husband from their home to attack them but were driven off by people in the community.

The union, with assistance from BIGUF, has filed police reports and sent letters to relevant government officials, the Bangladesh Garment Manufacturers and Exporters Association and other local stakeholders to demand justice for the anti-union acts and for management to respect the union’s legal right to exist. And on September 3, union leaders joined with other BIGUF union members and other labor allies to draw attention to the issue in front of the National Press Club in Dhaka. To date, the perpetrators of the assaults remain at large.