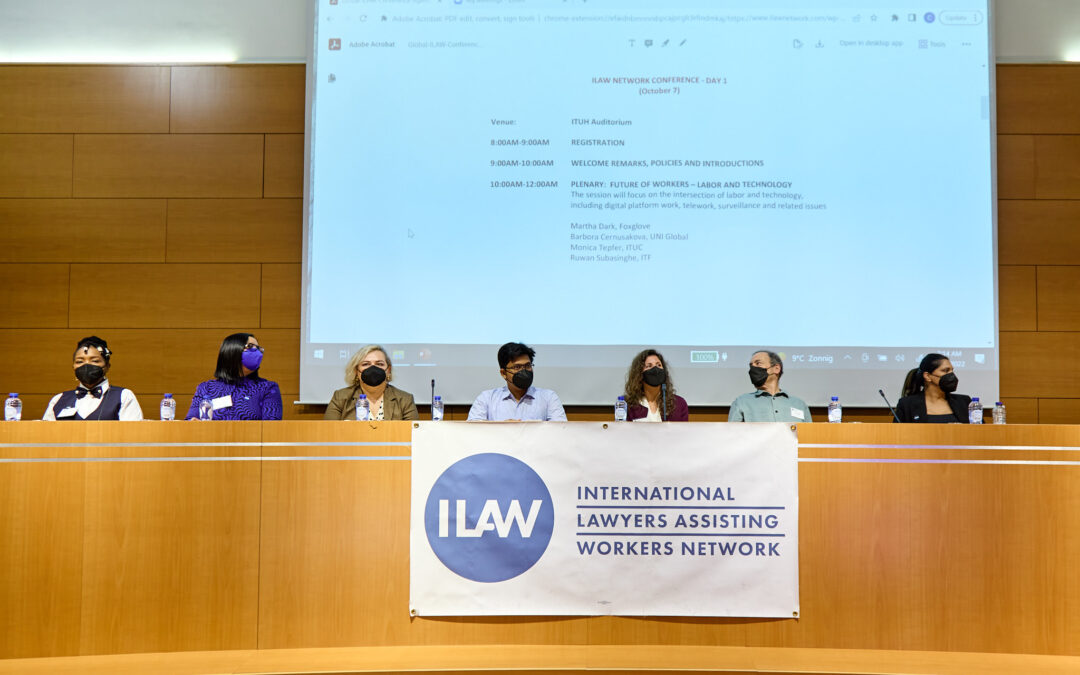 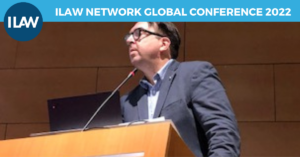 “We’re seeing that every effort is being made to try to find ways to undermine the rights of workers—there are so many new ways that workers are confronting, extreme obstacles to basic dignity and rights on the job,” he said. Vogt detailed the concrete ILAW Network’s concrete achievements since the organization’s first conference in 2019, which included the January 2022 decision by the Inter-American Court of Human Rights that affirmed workers’ right to strike in Guatemala.

Workers and Their Unions Key to Winning

In the first plenary session, “The Future of Workers—Labor and Technology,” panelists discussed how workers are standing up to the challenges of workplace surveillance, telework and app-based work—new versions of employment exploitation that employers have practiced for decades. 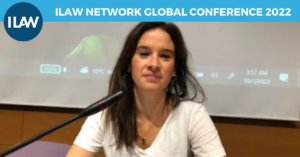 “Big tech companies have spent decades perfecting the art of creating cultures of secrecy that fail to provide proper jobs, but these issues are not specific to the tech space,” said Martha Dark, co-director of Foxglove, a United Kingdom-based nongovernmental organization seeking to make tech fair.

Dark was joined by Daniel Motaung, a former Facebook moderator who was fired for forming a union in Kenya and is now challenging the move in court along with a case arguing Facebook must provide decent working conditions

“I moderated content that was very difficult to speak of, including the live beheading of a woman,” he said. The horror he witnessed gave him post-traumatic stress disorder (PTSD), a mental heath condition common among the 15,000 social media monitors around the world who suffer such health issues without adequate protection from tech companies, Dark said.

Yet Facebook moderators in Kenya are paid as little as $1.50 an hour, according to a TIME magazine investigation.

“Worker rights are essential to empower tech workers to fight back against the dominance of tech attacks,” Dark said. “Unionizing across the world is a meaningful strategic check on corporate power.”

App-Based Workers Do Not Need to Trade Flexibility for Rights 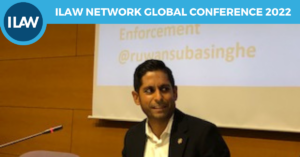 Job misclassification is one of the fundamental issues delivery drivers and other app-based workers face, said Ruwan Subasinghe, an ILAW Network Board member. When workers are classified as independent contractors, they have no guaranteed wage, paid compensation for workplace injury or illness, or other fundamental labor rights.

“Misclassification isn’t new, but with platform workers it uniquely affects workers of color and migrants and has a major impact on income and safety and health,” he said.

Worker rights lawyers are pushing for legislation to re-classify platform workers, arguing that they are not independent contractors because their employment relationship creates a form of dependency, Subasinghe said.

While tech companies argue that workers would lose flexibility in work schedules if they are classified as employees, worker rights on the job and flexibility are not mutually exclusive, he said, citing the Danish union 3F’s collective bargaining agreement with Just Eat. The contract includes rest breaks between shifts, pay for workers when they are logged off and the option of asking for two-hour wage slots. 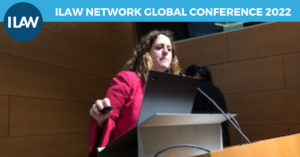 ILAW Network Board Member Monica Tepfer reviewed an International Labor Organization study that indicated how existing laws, such as equal protection, can be used to address issues arising in new models of work, such as telework and digital work,

“Work is not a commodity but collecting data can become a commodity,” and it is essential to work through laws and collective bargaining to ensure worker data is protected as well, she said.

Barbara Cernusakova from UNI Global Union, shared legislative examples of how workers in Europe are bargaining and litigating for their rights to privacy, health and safety and decent workplaces.

In a second morning panel, ILAW Network lawyers from Honduras, Nepal and Uganda described how they are implementing strategic litigation to improve worker rights.

Luitel is one of three recipients of the ILAW Network’s Litigation Fund established in July to provide modest financial assistance to promote or defend the rights and interests of workers and unions.

ILAW Network Member Robinah Kagoye described work in Uganda seeking to ensure labor law protections for workers in the informal economy, who comprise 87 percent of the workforce but are not covered by the country’s labor laws. Without such coverage, they have no safety and health protection, no paid sick leave and are not allowed to form unions—yet they create 50 percent of the country’s economy.

Kagoye says that police are now undergoing rigorous training on worker rights and must use body cameras. A street vendor bill has been introduced in Parliament, and Kagoye and others in the campaign for informal worker rights are in ongoing dialogue with the government on those rights.

In Honduras, Maria Elena Sabillion described litigation seeking compensation for garment workers who were suspended from work during the pandemic. Some 31,000 workers were suspended under Honduran laws, but the suspension did not comply with due diligence, she says. Companies used the suspension to lay off union leaders and workers who got workplace injuries, she said, earning huge profits while workers suffered with no wages.

Participants at the ILAW Network Global Conference also will evaluate progress since the first ILAW Conference in 2019, Speakers include Clément Voule, Special Rapporteur on the Rights to Freedom of Peaceful Assembly and of Association for the United Nations, and International Trade Union Confederation (ITUC) General Secretary Sharan Burrow.