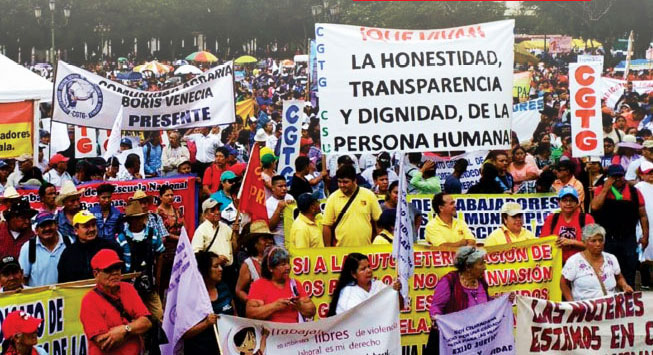 The Inter-American Court of Human Rights this week issued an historic ruling that affirmed a worker’s right to strike.

The case arises out of a collective dispute in 1996 when efforts by the Union of Workers of the Judicial Body to negotiate a new collective agreement failed. The union went on strike in March 1996, having complied with the procedures but before the General Inspectorate of Labor had confirmed two-thirds of the workers supported the strike—the legal requirement in the Labor Code. The Attorney General obtained an injunction declaring the strike illegal, and the employer subsequently fired those who had participated in the strike. In 1999, the Supreme Court confirmed the dismissals, leading the union to take the matter to the Inter-American Commission in 2000. The commission rendered its decision on the merits in 2019, and the matter was referred to the court in 2020 for a final, binding decision.

Unions in Guatemala and throughout Latin America are hailing the decision. César Guerra, secretary of Labor and Conflicts at the Union of Banana Workers of Izabal-SITRABI, calls the court decision “an important precedent for the country’s labor judges to rule in accordance with our rights, especially on a subject as stigmatized as the strike.”

The decision “sets an important precedent for the country’s labor judges to rule in accordance with our rights, especially on a subject as stigmatized as the strike,” he says. Exploitation and abuse of worker rights is widespread on banana plantations throughout Guatemala.

The Inter‑American Court of Human Rights is an autonomous judicial institution created to apply and interpret the American Convention on Human Rights. The seven court members come from countries that comprise the Organization of American States.

“This is an important decision on the right to strike, not only for Guatemala, on which it is directly binding, but also because it sets an important precedent for the rest of the region and the world,” says Jeff Vogt, director of the International Lawyers Assisting Workers (ILAW) network. “Importantly, the court ordered Guatemala to amend its labor laws concerning the right to strike to prevent repetition.”

ILAW submitted an amicus brief in support of the workers and focusing on the right to strike, an internationally recognized right protected by International Labor Organization (ILO) Convention 87 and now by the American Convention. ILAW was established in 2018 by the Solidarity Center.

The decision was hailed by Guatemalan unions. “As the SITRABI union, we feel extremely satisfied with the ruling of the Inter-American Court in favor of Guatemalan workers and trade unionism, which, despite arriving 25 years later, sets an important precedent for the country’s labor judges to rule in accordance with our rights, especially on a subject as stigmatized as the strike. And we hope, as stated in the judgment in its Reparations section, that the pertinent steps be taken to ensure that the ‘guarantees of non-repetition’ are fulfilled and that the right to strike of Guatemalan workers is effectively respected,” explains César Guerra, secretary of labor and conflicts at the Union of Banana Workers of Izabal.

No Law Can Prevent Basic Right to Strike

With regard to Guatemalan labor law, the court explained that “the conditions and prerequisites that the legislation establishes for a strike to be considered a lawful act must not be complicated to the point of making a legal strike impossible in practice.” The court further explained that, “While conditions for exercising the right to strike can be laid down in the framework of collective negotiation, these conditions must be reasonable and at no time should affect the essential content of the right to strike, or the autonomy of trade union organizations.”