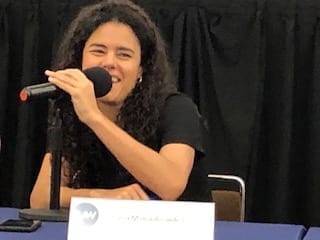 From Chile to Zimbabwe, the past year has been one of protest and struggle as unions, workers and citizens are standing up against economies that do not work for working people, said Solidarity Rule of Law Director Jeff Vogt, opening the first International Lawyers Assisting Workers (ILAW) Conference. 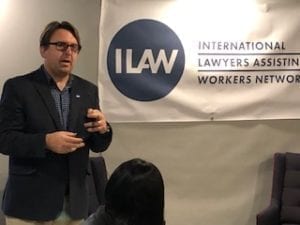 “We see the opportunities now to deepen democracy,” said Vogt, ILAW Board Chair. “We are making progress as unions and as lawyers for unions. That is what I want us to remember and share.”

More than 100 worker rights lawyers from around the world are in Mexico City for the two-day conference to share successes and seek strategies for overcoming obstacles to achieving worker justice on the job. Formed last year, ILAW has nearly 400 members from 50 countries.

Describing Mexico’s labor law reforms as “the most important in the last 100 years,” Mexico Labor Secretary Luisa Alcalde detailed during the opening plenary how the new law will reform the employer protection contracts that shut out workers’ voice in their unions. The contracts,which now comprise 80 percent to 85 percent of all workplace contracts, will undergo a process in which workers are asked to vote on whether the contracts represent them. Going forward, the law stipulates all new agreements are fully understood and accepted by union members.

Ultimately, Alcalde said, Mexico’s new labor law does not “just change articles and sections but relies on change of culture, a change of relationship between employers and unions” that emphasizes democratic process and accountability. 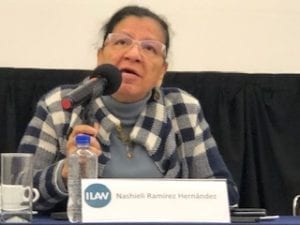 Also speaking at the plenary, Nasshieli Ramírez, president of the Human Rights Commission of Mexico City,  emphasized that Mexico’s labor law reforms are “sending out a clear signal against impunity as far as labor rights are involved.”

“Only by looking at structural conditions that cause inequality of labor rights” among the disabled, indigenous and other marginalized workers “that’s when we need to speak about progressive right of labor rights. Labor rights are human rights.” 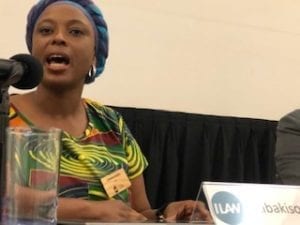 Libakiso Matlho, national director for the Women and Law in Southern Africa Research and Education Trust (WLSA)-Lesotho, opened the first panel plenary by describing a new groundbreaking agreement to end sexual harassment and other forms of gender-based violence at work in five Lesotho garment factories.

The program, established by two negotiated and enforceable agreements, will cover 10,000 Lesotho garment workers in factories that produce jeans and knitwear for the global market.

Lesotho-based unions, WSLA and the Federation of Women Lawyers in Lesotho (FIDA), major fashion brands and international worker rights organizations, including the Solidarity Center, negotiated with the factory owner, Nien Hsing Textiles, to mandate education and awareness trainings for all employees and managers, an independent reporting and monitoring system and remedies for abusive behavior.

The platform can be transferred to other countries and will serve to “correct the imbalance of power that exists now between employers and employees,” she said.