Worker Rights Lawyers from Across the Globe Set to Meet 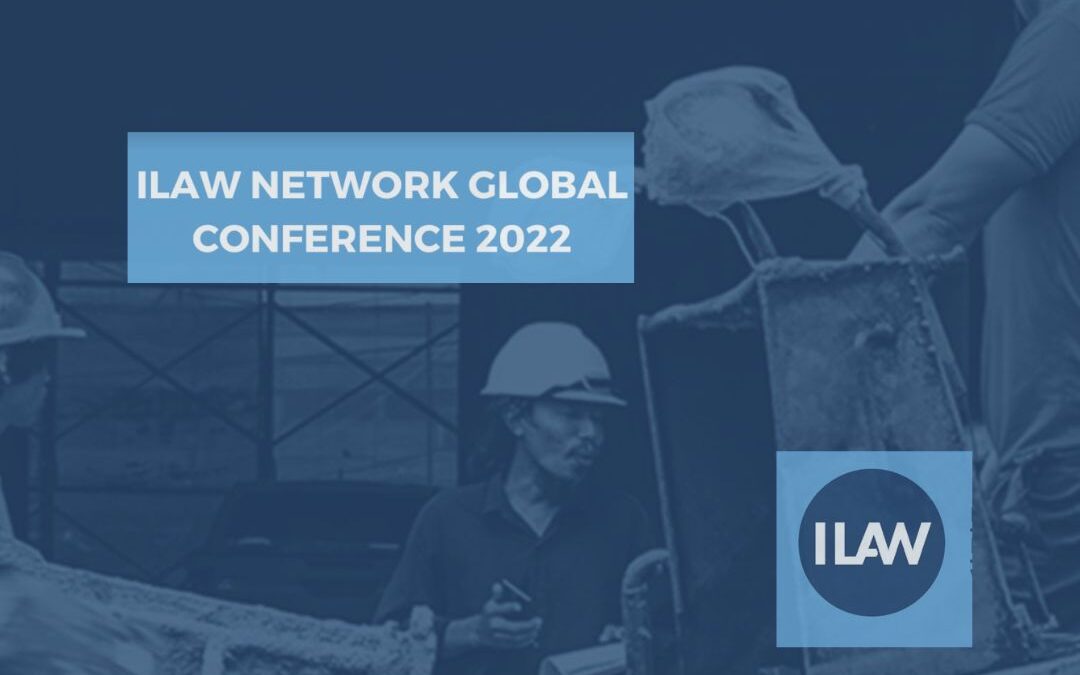 More than 140 labor lawyers from 42 countries are gathering in Brussels October 6–9 for the second global conference of the International Lawyers Assisting Workers (ILAW) Network, where they will exchange legal strategies for the promotion and defense of the rights and interests of workers and trade unions, explore coalitions with allies in the feminist, environmental and human rights movements and plan the network’s strategic goals for the next two years.

Participants at the ILAW Network Global Conference also will evaluate progress since the first ILAW Conference in 2019, where members set an ambitious agenda for advocacy, litigation and education. Speakers include Clément Voule, Special Rapporteur on the Rights to Freedom of Peaceful Assembly and of Association for the United Nations and UNI Global Union General Secretary Christy Hoffman.

Benson Upah, an ILAW Advisory Board member and coordinator in Nigeria, says one of the network’s accomplishments since the last conference is building membership—from some 350 members to more than 800 members in dozens of countries. The ILAW Network also has hired regional coordinators in Africa, the Americas, Asia and East Europe/Central Asia, fulfilling one of the members’ key recommendations at the first conference.

“The growth of the ILAW Network worldwide represents a significant step toward improving worker rights in areas of strategic litigation, bolstering labor legislation and holding governments accountable to their obligations under international labor standards,” says Solidarity Center Rule of Law Director and ILAW Network Chair Jeffrey Vogt. “ILAW lawyers proactively represent workers and unions and are a key part of workers’ struggles for rights, dignity and justice on the job.”

ILAW litigation supporting worker rights is both broad and finely targeted. One of the network’s key recent victories, says Mónica Tepfer, an ILAW Board member, is the January 2022 decision by the Inter-American Court of Human Rights that affirmed workers’ right to strike in Guatemala. The ILAW Network filed a 40-page amicus brief successfully arguing that a series of court rulings denying workers’ right to strike if two-thirds vote to do so violated the country’s Labor Code.

ILAW assisted the Georgian Trade Union Confederation in developing a report, “The Impact of COVID-19 Pandemic on Women’s Labor Rights,” which included recommendations that ILAW and Georgian trade unions are now advocating for at the national level to improve worker rights protections for women.

In Uganda, ILAW provided legal support for more than 170 street vendors who were arrested following eviction orders and charged with offenses such as selling goods without a license and public nuisance. ILAW worked in collaboration with unions organizing in the informal economy and with partners such as WIEGO, Friedrich-Ebert-Stiftung and StreetNet International.

ILAW from the beginning has worked closely with partners globally. “The collaboration between the ILAW Network and the International Trade Union Confederation (ITUC)—a founding member and board member of ILAW—provides ITUC affiliates the best legal advice and assistance to advance labor right and I expect that that collaboration to continue and to deepen,” says Paapa Danquah, ILAW Board member and ITUC Legal Director.

A Push for Platform Worker Rights

Along with a focus on workers in the informal economy such as street vendors, ILAW has engaged in extensive research and legal support on behalf of app-based workers. For instance in Nigeria, ILAW backed litigation advancing the rights of drivers hired through digital platforms such as Uber and Bolt. The drivers are misclassified as independent contractors rather than as employees and so do not receive paid sick leave, compensation for workplace injuries or other basic protections provided by the country’s labor laws.

ILAW also researched gig workers’ labor rights protection in Central Asia, looking into the digital platform markets and identifying drivers’ working conditions. In addition, ILAW produced to the report, “Taken for a Ride: Litigating the Digital Platform Model,” in response to requests from ILAW Network members for comparative analysis on litigation against digital platform companies around the world. The network also compiled the Database on Standards and Decisions on Digital Platform Work in Latin America that includes draft laws, legislation and decisions regarding digital platform work.

In July, the ILAW Network launched the Litigation Fund to provide modest financial assistance to promote or defend the rights and interests of workers and unions. Supported by the Open Society Foundations, the fund currently is supporting litigation in Nepal, Uganda and Zimbabwe.

Additional ILAW network accomplishments since the 2019 conference include:

Since the last ILAW conference, “the visibility of the Network has been significantly raised among the labor rights lawyers, scholars and others interested in the labor rights related issues,” says Raisa Liparteliani, ILAW Network board member. “In my opinion the periodic review, the Global Labour Rights Reporter (GLRR) positively affected to this process.”

The 2022 conference offers members a renewed opportunity to shape the coming years of the network and strategize on addressing emerging issues such as impacts of climate change on labor, the future of work, the emergence of artificial intelligence in managing workers and the new challenges in the changing workplace.