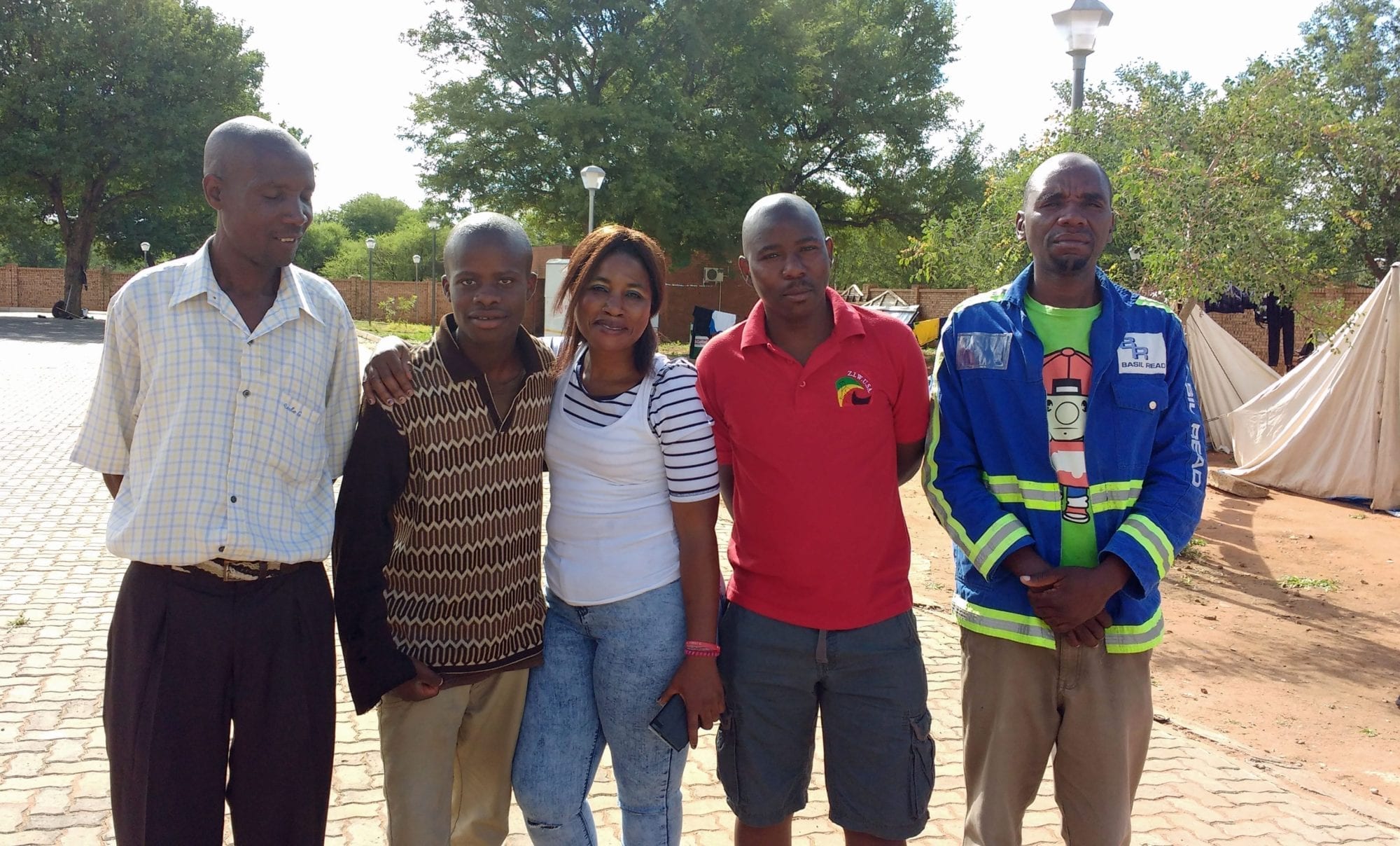 Edias was 12 years old when he traveled from Zimbabwe to South Africa to look for a job in agriculture. Now in his mid-twenties, he and other farm workers had been working 12 hour days, 7 days a week, and paid less than half the legal minimum wage when they asked the corporate farm owner for a raise last year.

Instead, they were assaulted and clubbed by a group of men led by the farm owner. Their homes—they lived on the farm—were burned. Edias described to Solidarity Center staff how he and four other workers were kidnapped, tortured and interrogated for hours before police arrived. (Find out how the Solidarity Center achieved justice for some of the migrant workers.)

Edias and his co-workers are among 34 million African migrants, the majority of whom are in search of decent work across borders. While an estimated 25 percent of African migrants are in Europe, the majority of migrants remain within the continent, often working in the most dangerous, unregulated jobs where they are paid little and have few rights.

From January 25–27, the Solidarity Center will co-host a conference in Johannesburg, South Africa, that will bring together union leaders, migrant worker rights advocates and top international human rights officials from 22 countries and 57 organizations from around the globe to share strategies for empowering migrant workers throughout Africa.

“Achieving Fair Migration: Roles of African Trade Unions and Their Partners,” will explore best practices for asserting a worker rights agenda into national, regional and global migrant worker policies and examine tactics for strengthening cross-border and cross-regional cooperation among unions and other migrant rights organizations.

Maina Kiai, United Nations Special Rapporteur on the rights to freedom of assembly and of association, will keynote the conference and discuss findings from the landmark report his office presented to the UN last fall. “Migrants have become a massive, disposable, low-wage workforce excluded from remedies or realistic opportunities to bargain collectively for improved wages and working conditions,” according to the report.

“Beside networking and establishing partnership with unions, organizations and associations, we aim to learn and share knowledge especially on how we can advocate,” says Jele. He also seeks to raise awareness “and call for solidarity” around the issues of  former miners and their families.

Migrant miners who contract silicosis and tuberculosis from working without safety equipment are sent back to their origin countries with no support for medical care. As a result, Jele says, many former miners are dying and their families are in poverty because they have lost their primary breadwinner. SWAMMIWA last month coordinated a policy dialogue around migration issues in Swaziland and advocates to harmonize policies and regulations in the South Africa Development Community (SADC) to abolish inhumane treatment of migrant workers and involve migrant workers in union bargaining.

The prevalence of informal jobs and the lack of recognition of migrant worker’s status “creates opportunities for exploitation and difficulties for unions to organize and represent migrant workers,” says Caroline Mugalla, executive secretary of the East African Trade Union Confederation (EATUC), who also will participate in the conference.

The “Fair Labor Migration” conference provides a forum for African trade unionists to coordinate strategies for reaching out to and empowering migrant workers, many of whom are part of the large and growing informal economy. Participants will discuss shaping a trade union agenda against xenophobia and racism, including strategies for tackling discrimination and xenophobia in unionized and non-unionized workplaces; the challenges of organizing and addressing migrant worker exploitation in the informal sector; increasing opportunities for migrant workers to exercise their rights and access justice; and labor protections.

“Government officials, businesses and corporate interests have sought to ‘manage’ the movement of migrants like everyday commodities through temporary migration programs and unregulated migration flows that benefit employers at the expense of workers.”  The “Achieving Fair Migration” conference will provide a forum for exploring how to enhance African labor voices in global and regional migration governance policy.

The conference, co-sponsored by the African Regional Organization of the International Trade Union Confederation (ITUC-Africa), will include regional breakouts and opportunity for discussion around area-specific migration issues and hands-on strategic workshops with concrete action plans on union cross-border cooperation, organizing migrant workers and more. 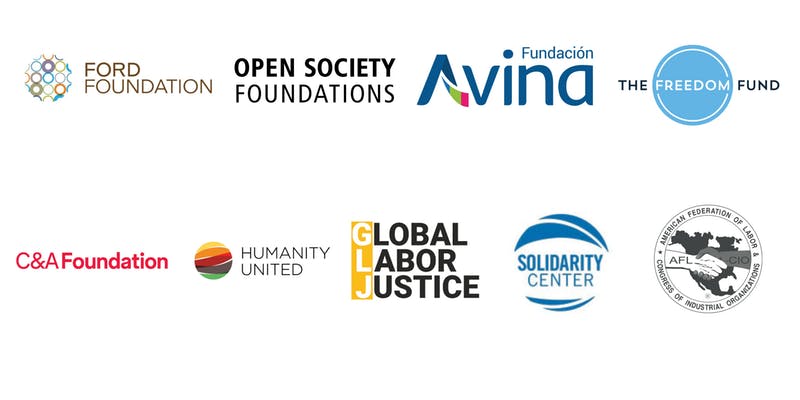 BUILDING POWER: WOMEN’S LEADERSHIP IN THE FIGHT FOR JUSTICE, DEMOCRACY, AND FAIR WORK

Women Leading from the Frontlines of the Global Economy 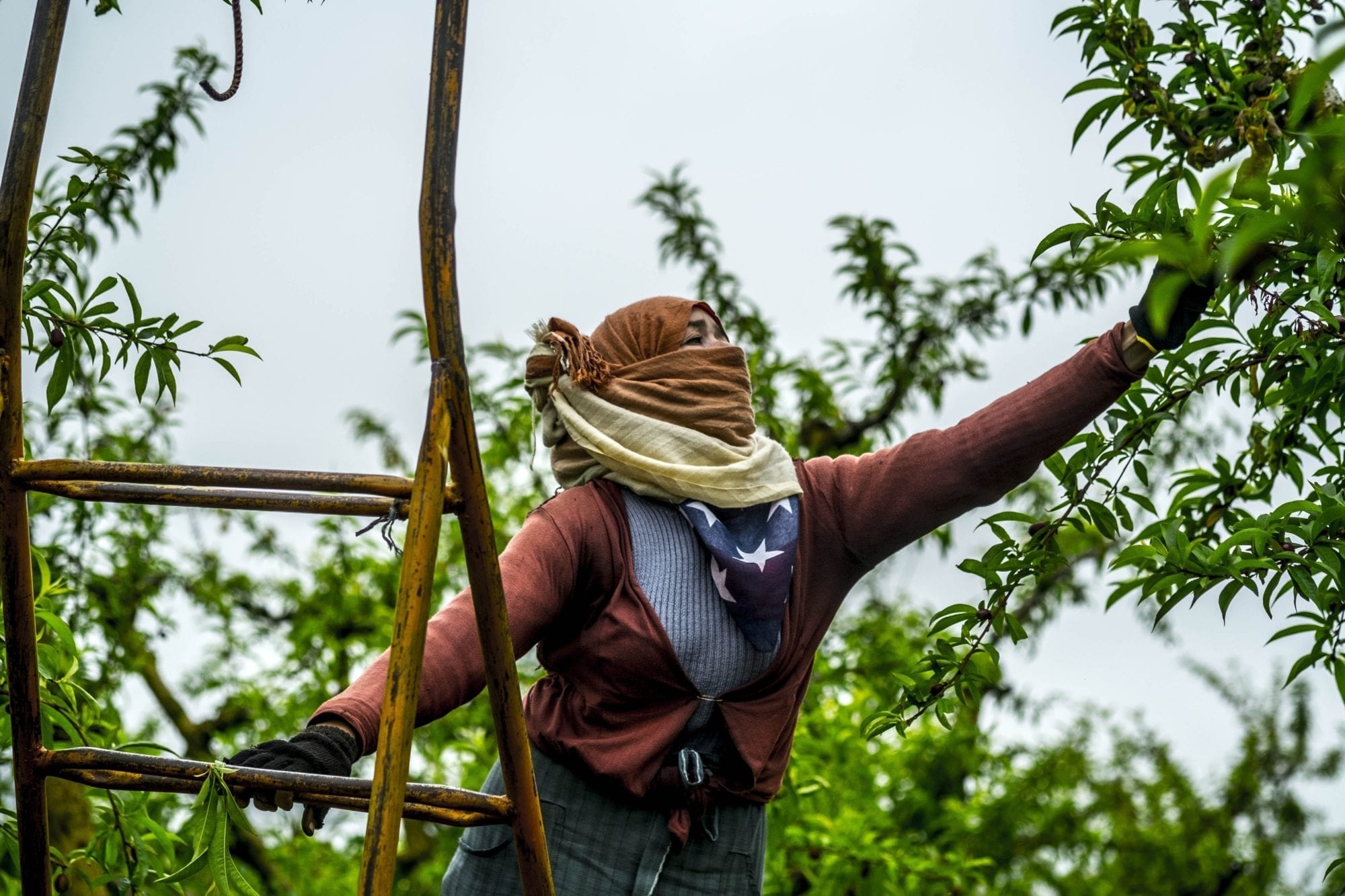 The conference, “Realizing a More Fair Global Food Supply Chain,” will explore farmworker organizing strategies, alliances to support worker rights across the food chain, legal initiatives to ensure decent work and the importance of workers in the advancement of sustainability and justice as our food moves from farm to table.

1:30 p.m. – 3:00 p.m.
Strategy Session
Panelists will offer a global perspective on legal initiatives and strategies to support decent work and rights for workers in agriculture.

3:15 p.m. – 5:00 p.m.
Closing: What’s next?
Participants will explore the future of workers building power and voice in sustainable food chains while ensuring fairness and sustainability in agriculture supply chains.

Fact Sheet: Women Workers in Agro-Industry
The Human Pain in Every Morsel You Eat [Podcast interview with Solidarity Center Executive Director Shawna Bader-Blau, min. 5:00]
Global Supply Chains: Not Every Job Is a Good Job
Modern Slavery in Company Operation & Supply Chains
Decent Work in Global Supply Chains
The Rights to Freedom of Peaceful Assembly and Association in the Workplace

Two years after Nepal’s powerful earthquake, slow pace of reconstruction offers an opportunity for the nation to change its economic model, which leans heavily on remittances from Nepali migrant workers. It is a “unique moment” to create jobs that protect workers’ rights, pay fair wages and boost the economic status of its citizens, according to a new report by U.S.-based groups Solidarity Center and JustJobs Network. 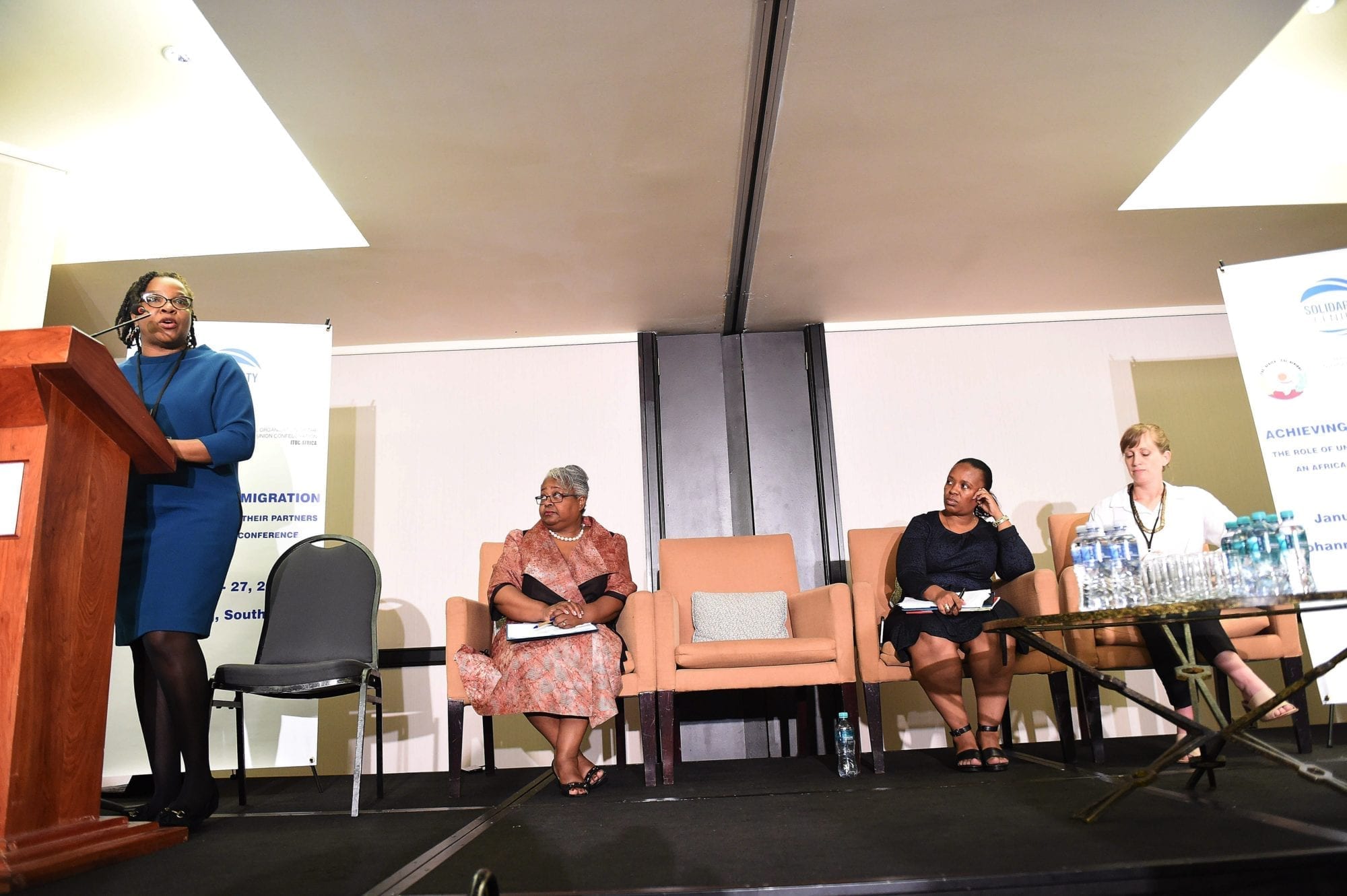 Labor Migration Conference: ‘Our Voices Will Be Strong’

“We want to make our voices heard and strong in Africa and globally. Our voices will be strong,” Joel Odigie told the more than 130 union leaders, migrant worker rights advocates and top international human rights officials in the closing session of the Solidarity Center labor migration conference in Johannesburg, South Africa.

“This wasn’t just an event,” says Odigie, coordinator of human and trade union rights for the International Trade Union Confederation-Africa (ITUC-Africa), “this was a process that is feeding to so many things.

“We see your passion,” he says, minutes before conference participants broke out into labor solidarity songs from the United States and across Africa.

Earlier this morning, participants heard from speakers based in the United States, South Africa and the Arab Gulf region on their efforts to build networks between unions and civil society organizations to improve the working conditions of marginalized workers in a discussion moderated by Solidarity Center Africa Region Director Imani Countess,

“Black worker centers in the South are in response to declining working conditions and declining manufacturing  jobs. They are a reaction to disparate pay and discrimination,” says Goban-Wallace. Black workers in the American South historically have had little or no access to joining unions, and employers have sought to break strikes by hiring black workers. 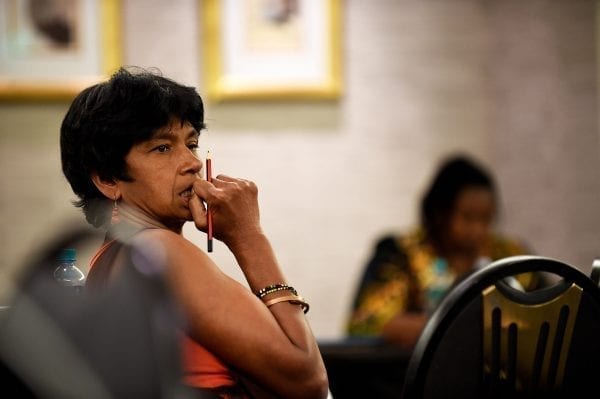 The 12 black worker centers in United States provide employment aid to the underemployed and remove employment barriers to formerly incarcerated. But increasingly, says Wallace-Goban,  full-time workers are contacting the center because they are experiencing racial slurs, hostility, harassment and assault on the job because the are black.

From the Congress of South African Trade Unions (COSATU), Zanele Lungie Matebula, deputy secretary of international relations, described the federation’s efforts to improve the workplace conditions of migrant domestic workers, nearly all of whom are employed in the informal economy.

In the Gulf Cooperation countries, migrant workers represent the majority of the workforce yet have few rights, including no right to form unions, says Francesca Riccardone, Solidarity Center Gulf regional program director.

Riccardone described the efforts by unions and community organizations, such as the Nigerians in Diaspora Organization (NIDO) in Qatar, to directly assist migrant workers.

Unions in countries from which workers migrate can assist by pushing governments to enact bilateral or multilateral labor agreements that include protections for workers.