‘We Don’t Park Our Human Rights at the Border’

More than 130 union leaders, migrant worker rights advocates and top international human rights officials from nearly two dozen countries were urged to take action to improve migrant worker rights in by a range of speakers on the second day of the January 25–27 Solidarity Center fair labor migration conference.  (Follow the conference on Twitter with the hashtag FairMigration and check out Solidarity Center on Facebook for regular updates.)

“More than ever before we need to reach out today to get (migrant workers) in the union,” says Joel Odigie, coordinator of human and trade union rights for the International Trade Union Confederation-Africa (ITUC-Africa). “We need to strongly prioritize the organizing of migrants.” The ITUC-Africa is co-sponsoring the conference, “Achieving Fair Migration: Roles of African Trade Unions and Their Partners” in Johannesburg, South Africa.

‘We’ve Got to Work Together’

“As the world is corporatized, we have to see how we as the 99 percent come together and deal with it,” says Maina Kiai, United Nations Special Rapporteur on the Rights to Freedom of Peaceful Assembly and of Association. 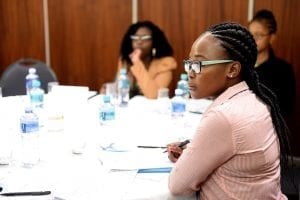 He described how corporate leaders compete in the global economy but close ranks when working for their interests. Odigie, Kiai and Samir Abi, the permanent secretary from the West Africa Observatory on Migration, took part in an informal conversation during the morning session.

Addressing a room filled with trade unionists and migrant worker rights advocates, Kiai urged civil society to come together across sectors to challenge concentration of wealth and power that has led to closing civic space.

“We have to ask ourselves, how are we going to deal with this 1 percent? Businesses will listen to us when we know we can effect them. How do we get the 99 percent to work together?”

In October, Kiai issued the landmark Rights to Freedom of Peaceful Assembly and of Association report on workplace rights to the UN General Assembly. The report forcefully conveys how the vast majority of the world’s workers are disenfranchised from their rights to assembly and association—rights that are fundamental to all other human rights—either by exclusion or outright oppression.

“Mobility is a right,” says Abi. And under international human rights law, we all have rights,” Kiai said.  “We don’t park our human rights when we cross the border.”

Odigie agreed, saying, “The bottom line is, we’ve got to work together.”

Introducing Kiai, Solidarity Center Executive Director Shawna Bader-Blau said among those fundamental human rights are the “right to form unions and form associations of your choosing,” along with the right to strike right to strike.

Bader-Blau described how the power of assembly and association have led to many  improvements for workers around the world, making freedom of association is “absolutely essential for migrant workers to allow them to raise their voices in the global economy.” 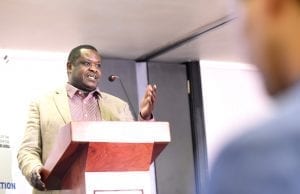 “Let’s commit our blood to migrant workers. We did not inherit what we had from our forefathers we borrowed from future generations. What we are doing today, we are doing for future kids.”

Chibebe shared how the ITUC is working to aid migrant workers, noting the organization is prodding the International Labor Organization (ILO) to push tripartite arrangements in country to deal with migrant workers and encouraging national-level affiliates to network across borders for migrant workers.