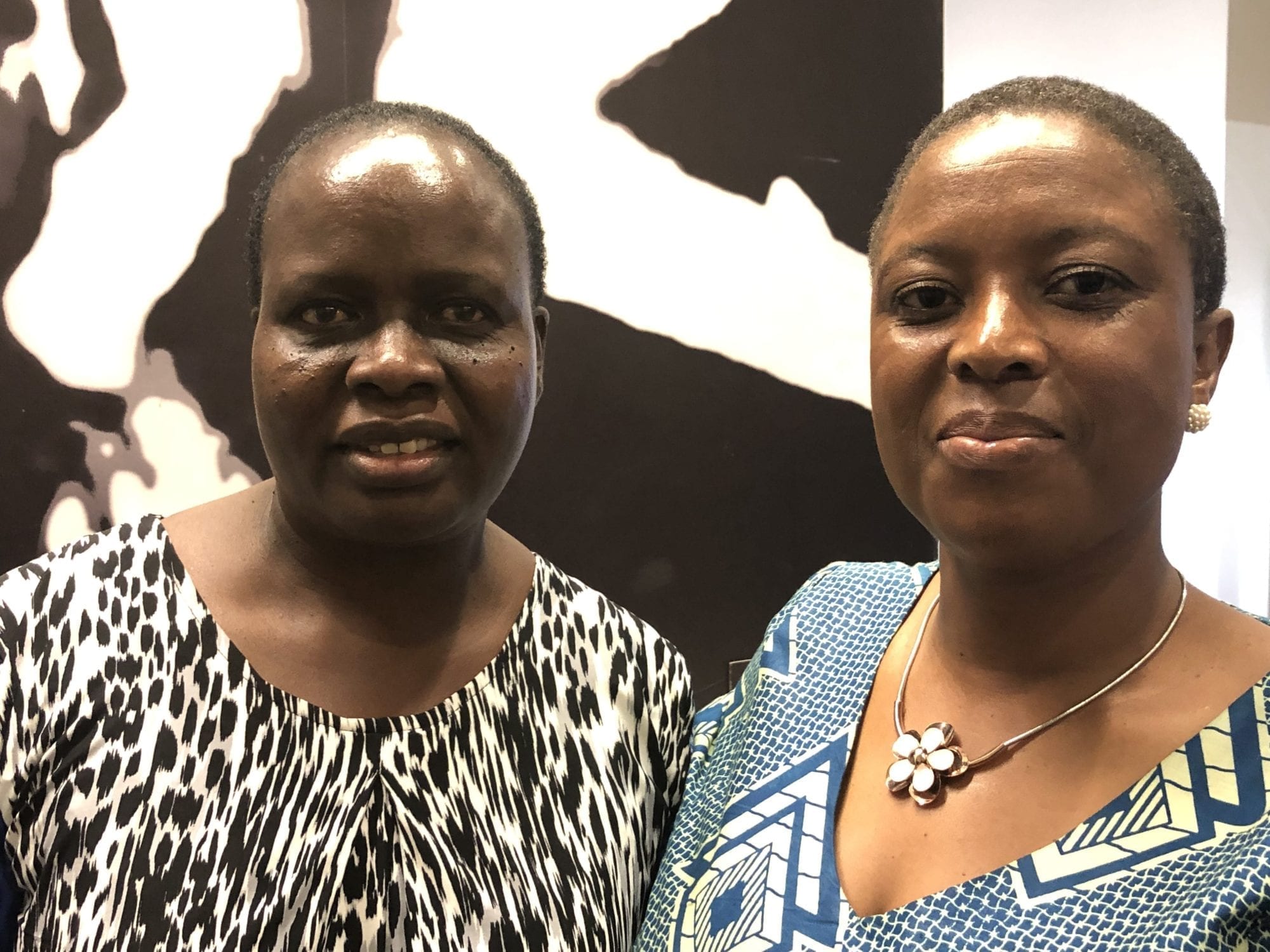 Dynamic women worker rights leaders from across the globe offered a vision for hope, resilience and movement toward an economy and society that works for people and the planet yesterday at the event, “Building Power: Women’s Leadership in the Fight for Justice, Democracy and Fair Work” in New York City. 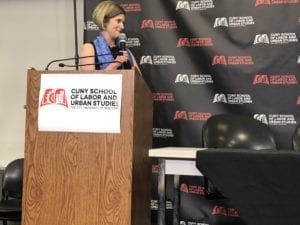 “We are bringing women labor leaders together today who are at the forefront of movement building. They all know one thing—collective power is the way to build justice. Collective power is the way to democracy,” said AFL-CIO International Director Cathy Feingold, opening the gathering, a side event to the United Nations General Assembly meetings happening this month. (Watch the event here.)

Sponsored by the Open Society Foundations (OSF),  Ford Foundation, Freedom Fund, Fundación Avina, C&A Foundation, Humanity United and AFL-CIO, Solidarity Center and Global Labor Justice, the gathering of representatives from the philanthropic community and worker justice organizations served to both celebrate the achievements of women leaders and reflect on what has worked—and what needs more support—in the fight for justice, democracy and fair work for all.

In a statement issued before the event, the philanthropies committed to supporting labor organizations and worker groups in their portfolios, backing ratification and implementation of International Labor Organization (ILO) Convention 190 to eliminate gender-based violence and harassment at work, and boost advocacy to support civic space.

The philanthropies were inspired by the women who fought for passage of Convention 190, said Laine Romero-Alston, team manager for the Fair Work Program/International Migration Initiative at OSF. “Out of that inspiration we are committing to you all to support the work moving forward.”

‘Dignity and Rights of Working People, Not Exploitation’ 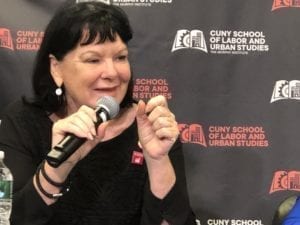 The future of work must be about “dignity and the rights of working people and not exploitation”—ITUC General Secretary Sharan Burrow. Credit: Solidarity Center/Tula Connell

“Look at the inequalities in workplaces, who is most affected? Women are most affected,” said Rose Omamo, general secretary of Amalgamated Union of Kenya Metal Workers and the national chair of the Central Organization of Trade Unions-Kenya (COTU-K) Women’s Committee.

“We need to work in solidarity together, have alliances, build alliances,” said Omamo who, as an elected member of the Organization of African Trade Union Unity and a member of ITUC–Africa Women’s Committee, is building cross-continent partnerships. 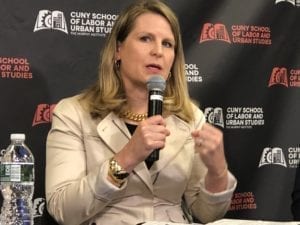 “Sixty percent of the world’s workers are in the informal economy with no minimum wage, no rule of law, no social protections,” International Trade Union Confederation (ITUC) General Secretary Sharan Burrow said to the packed crowd. “The employment model is broken down and the future of work must be about dignity and the rights of working people, not exploitation,” she said.

Moderated by Patrick Gaspard, OSF president and former U.S. ambassador to South Africa, the panel also explored solutions for ensuring a future of work rooted in a global economy that works for everyone.

One solution starts with unions themselves: “We need to get more women into union leadership,” said AFL-CIO Secretary-Treasurer Liz Shuler. “We cannot be afraid to fail and experiment and connect with young people by making the labor movement relevant to what they see in their lives.”

‘Elimination of Gender-Based Violence Key to Accessing Other Rights’ 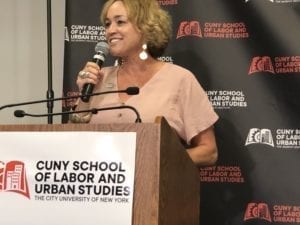 One element that sets the agreement apart from most corporate social responsibility (CSR) initiatives, she said, is the inclusion of freedom of association. With unions at the table, she said, employers can be held accountable to keeping their commitments.

Worker rights leaders Maricarmen Molina and Anannya Bhattacharjee discussed the structural underpinnings of gender-based violence at work and the ramifications for women workers who suffer such abuse. 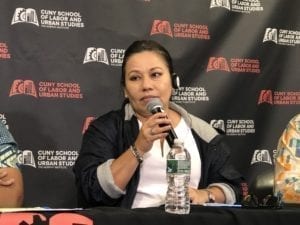 “Violence and harassment are part of a continuum of behaviors in many of the systems where we work”—Mariecaremen Molina Credit: Solidarity Center/Tula Connell

“Violence and harassment are part of a continuum of behaviors in many of the systems where we work,” said Molina, the first woman secretary general of a national union confederation in Central America, the CSTS (Confederación Sindical de Trabajadores y Trabajadoras de El Salvador). The CSTS, working with the national federations CONFUERSA and FEASIES, recently won significant minimum wage increases for workers in service, industrial and agricultural sectors.

“We have found that gender-based violence at the workplace is the most corrosive element that works against everything,” said Bhattacharjee, international coordinator for the Asia Floor Wage Alliance.

“It is really difficult for women in those situations to attempt to form unions,” which would enable them to join together to improve their working conditions.

Elimination of gender-based violence is the necessary condition for accessing other labor rights, such as the right to a living wage, such as 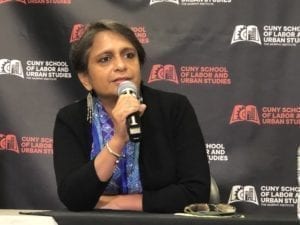 the right to freedom of association,” said Bhattacharjee. “It is part of a global supply chain where the brands are the main drivers. Their  purchasing practices are what causes the gender-based violence. Anything we do, they have to build held accountable in any agreement that works.”

Unions and collective action are key to holding employers accountable and to ensuring workers can exercise their fundamental rights on the job, the panelists agreed. And “labor rights are core to democracies, they are core to making all our other democratic rights real,” said Bader-Blau, closing the event. “These rights are under attack in every single one of our countries right now. And it is on all of us to stand up for worker rights.

“For every woman trade unionist who has ever received a death threat for daring to lead… for every new activist young and old entering the labor movement right now who doesn’t know if she has a place because our institutions have for so long been so male dominated, we see you,” she said.

“We respect and honor what you are trying to do to make our democracies stronger and more just. You are the future and we all of us in this room have your back because this is what democracy looks like!”

The CUNY School of Labor and Urban Studies hosted the event, with Dean Gregory Mantsios welcoming the group.