Lesotho Plan Has All Elements to End GBV at Work 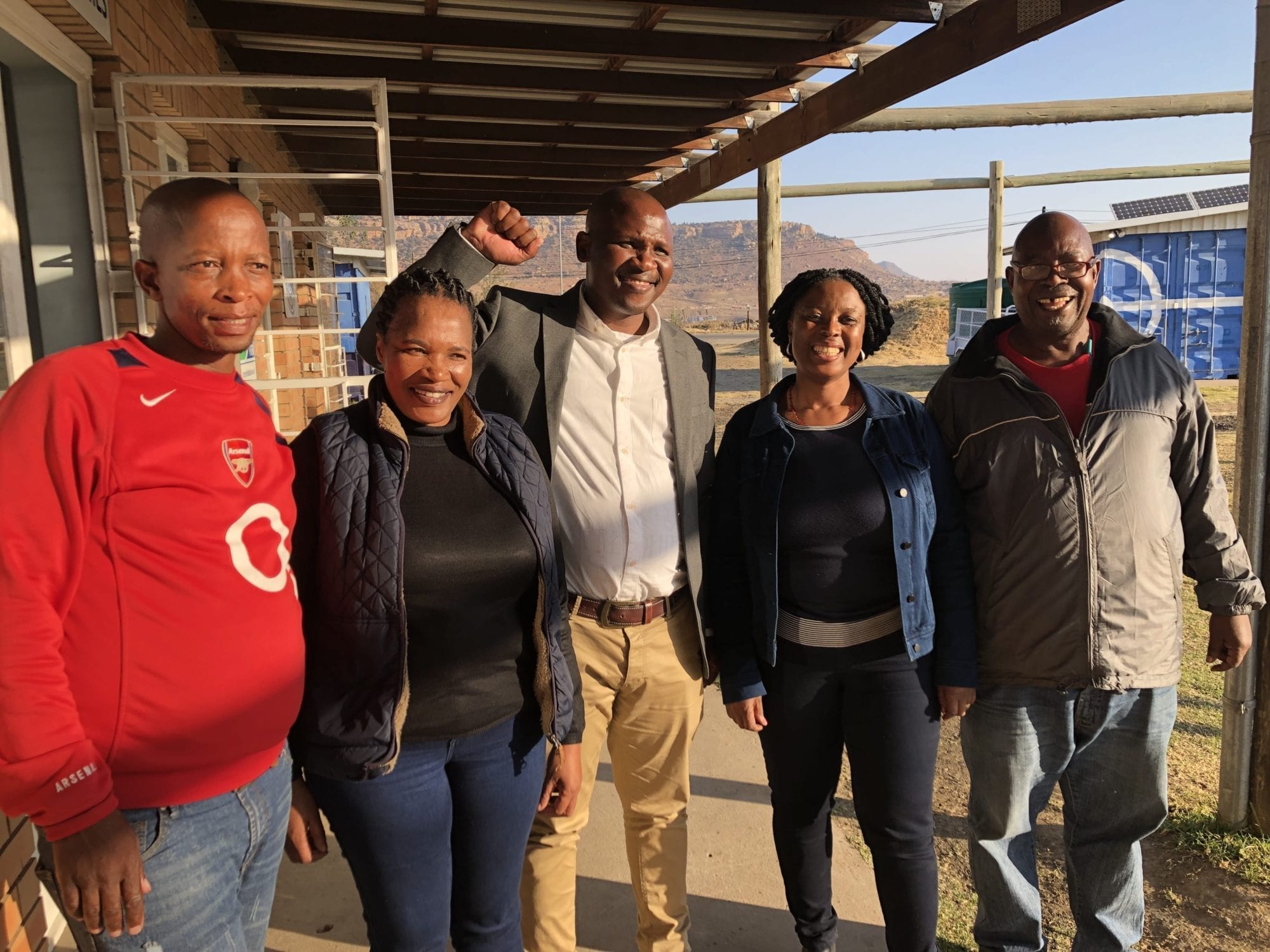 Lesotho unions and women's rights organizations are joining with the Solidarity Center and WRC together with the employer and brands in Lesotho to achieve a dignified workplace for women garment workers. Credit: Shawna Bader-Blau

The program, established by two negotiated and enforceable agreements, will cover 10,000 Lesotho garment workers in five factories that produce jeans and knitwear for the global market. Lesotho-based unions and women’s rights groups, major fashion brands and international worker rights organizations, including the Solidarity Center, negotiated with the factory owner, Nien Hsing Textiles, to mandate education and awareness trainings for all employees and managers, an independent reporting and monitoring system and remedies for abusive behavior. 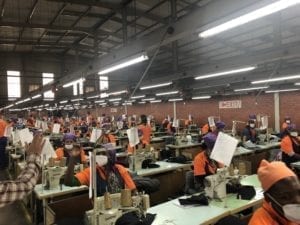 The agreement was reached after WRC documented how the mostly female garment workers were regularly coerced into sexual activity with supervisors to keep their jobs. Credit: Solidarity Center/Shawna Bader-Blau

The parties came to the table after U.S.-based Worker Rights Consortium (WRC) documented how the mostly female workforce at three Nien Hsing textile factories was regularly coerced into sexual activity with supervisors as a condition of gaining or retaining employment or promotions, and were persistently sexually harassed, verbally and physically.

The Lesothoan unions and women’s rights groups, all with proven histories of fighting to advance the rights of workers and women throughout the country, are: the Federation of Women Lawyers in Lesotho (FIDA), the Independent Democratic Union of Lesotho (IDUL), the National Clothing Textile and Allied Workers Union, Lesotho (NACTWU), the United Textile Employees (UNITE) and Women and Law in Southern Africa Research and Education Trust (WLSA)-Lesotho. They will administer the agreement and will serve on the oversight committee.

“This is the first initiative in Lesotho that brings together workers, unions, women’s organizations and employers to work towards one common goal of improving the socioeconomic rights of women in the workplace,” Thusoana Ntlama, FIDA programs coordinator and Libakiso Matlho, WLSA national director, said in a joint statement.

Nearly two-thirds of the garment workers WRC interviewed reported “having experienced sexual harassment or abuse” or having knowledge of harassment or abuse suffered by co-workers, according to the report. Women workers from all three factories identified GBVH as a central concern for themselves and other female employees.

“Many supervisors demand sexual favors and bribes from prospective employees,” one worker told WRC investigators. “They promise jobs to the workers who are still on probationary contracts. […] All of the women in my department have slept with the supervisor. For the women, this is about survival and nothing else. […] If you say no, you won’t get the job, or your contract will not be renewed.”

All the Elements to Prevent, Eliminate GBVH at Work

While sexual harassment and other forms of gender-based violence may happen at any workplace, GBVH is rampant in the global garment and textile industry. Globally, some 85 percent of garment workers are women. They are especially vulnerable to abuse and violence at work because of imbalanced power structures, high poverty and unemployment.

The Lesotho plan “has all the elements needed to prevent and eliminate gender-based violence at work,” says Solidarity Center Executive Director Shawna Bader-Blau. “First, there’s real accountability. It is binding and enforceable on all parties. And the global brands and the employer have guaranteed their commitment to enforcing and upholding the code of conduct by signing fully executed, binding and enforceable contracts.”

Importantly, says Bader-Blau, “the program is sustainable because it’s worker designed, with unions working together with women’s rights groups to deliver it.”

And because the freedom to form unions and collectively bargain has proven essential to addressing gender-based violence and harassment at work and in creating the space for workers to shape a future of work that is fair and democratic, it’s especially key that these agreements also protect workers’ rights to freely form unions, says Bader-Blau.

Nien Hsing, which manufactures apparel for global brands in several countries, signed one agreement with trade unions and women’s rights organizations in Lesotho to establish the GBVH program, and has committed to take recommended action when violations of the program’s code of conduct have been established.

The global brands entered into a parallel agreement in which, should Nien Hsing commit a material breach of its agreement with the unions and NGOs, it will take action, including a potential reduction in orders.

In the past, as one worker told WRC, “The [supervisors accused of harassment] are usually rotated to other departments,” arrangements the plan seeks to eradicate.

Putting the Plan into Action

Lesotho-based women’s rights organizations, unions, the Solidarity Center and WRC will jointly design the education and awareness program and curriculum, with input from the newly created independent investigative organization.

They also will carry out the two-day training, in which all workers and managers will take part. Workers will be paid regular wages during the training.

And importantly, says Bader-Blau, “Empowered workers with a negotiated stake in the agreements can identify and report violence and harassment. And because they have established the terms with the employer as equals, they can be sure that retaliation for reporting abuse and the impunity of abusers will end. Unlike corporate social responsibility programs, the Lesotho program is a contractual agreement with the employer, the brands and the unions, which means everyone is accountable to the code of conduct–with workers able to enforce it as an equal party.”

The program is partially modeled after the Fair Food Program, a set of binding agreements between leading food brands, like McDonald’s and Whole Foods, and the Coalition of Immokalee Workers. Using the type of independent complaint mechanism that will be established by the Lesotho agreements, the Fair Food Program has largely eliminated what had been rampant sexual harassment and coercion in the tomato fields of Florida.

The agreements also build on the Bangladesh Accord on Fire and Building Safety, in which unions were key participants, and recognizes the fundamental role of collective bargaining in negotiating an agreement that is binding on employers and international brands and in bringing accountability to the global supply chain by ensuring the agreement is implemented and enforced.

Funding for the two-year program will come primarily from the three brands, in collaboration with the U.S. Agency for International Development (USAID, and the program will kick off in fall 2019.