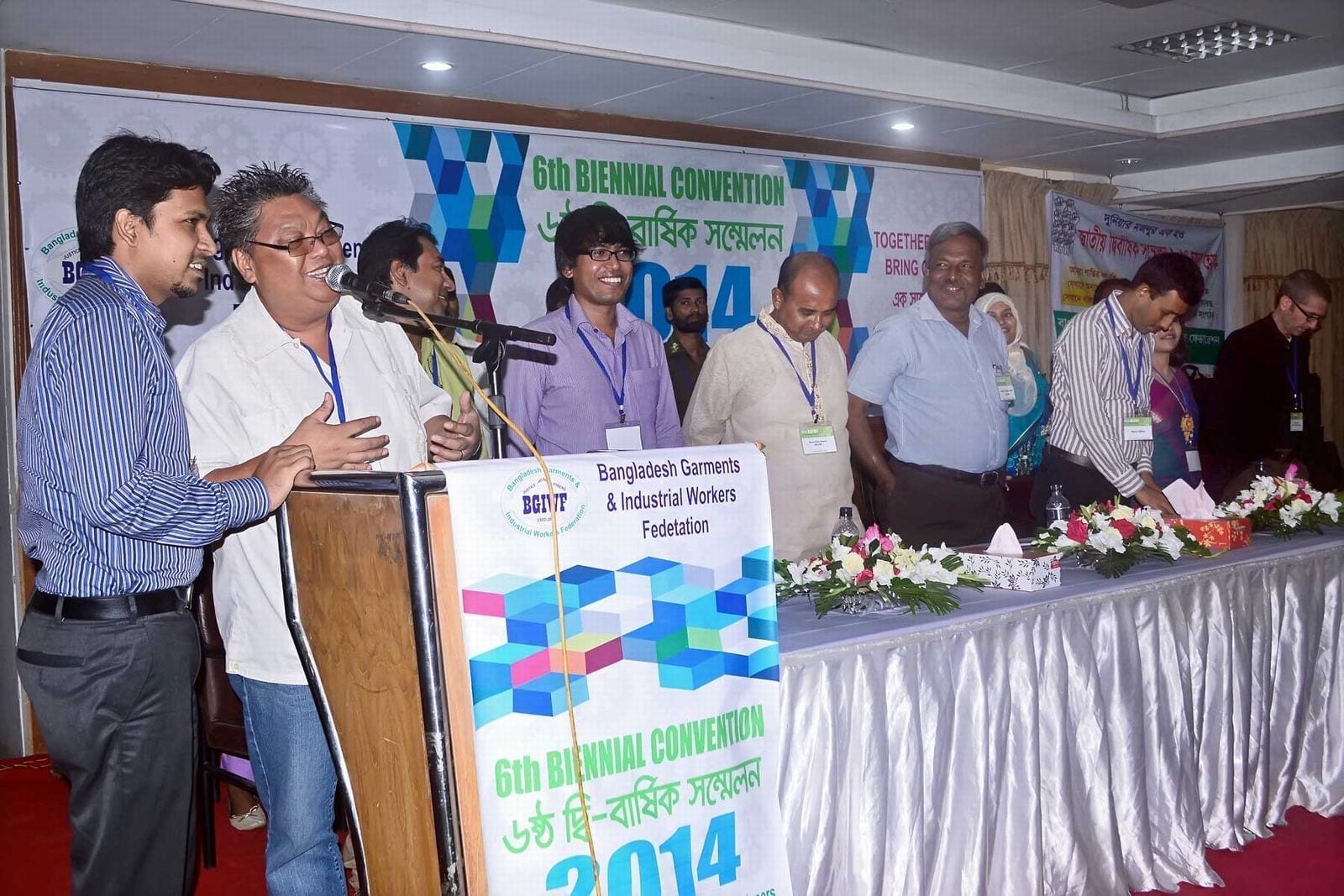 Some 600 factory-level garment union leaders and workers from 35 factories met during the recent Bangladesh Garments and Industrial Workers Federation (BGIWF) Convention in Dhaka, the Bangladesh capital.

Joining together under the convention theme, “Together we can bring change,” participants described the workplace improvements that followed after workers formed unions.

“Before forming the union, the workers were abused in different ways. For instance, if the production target was not fulfilled, management terminated them,” said Md. Khokhon Skikdar, general secretary of Lufa Garments Ltd. “But now, they (the managers) value us and hold mutual discussions.”

Tania Akhter, general secretary, Luman Fashion Workers Union, said before workers formed a union at Luman, “if any worker could not fulfill the production target, management forced them to work without any payment.” Now with union representation, “they receive earned leave pay, maternity leave and overtime wages due them as guaranteed by the labor law of Bangladesh. They are ensured of their rights after getting involved with union activities in the factory.”

Through their union, workers have achieved concrete workplace improvements “which were quite impossible earlier,” said Salma Akhter, joint general secretary of Winy Apparels Workers Union. “After forming a union, we increased our evening shift bill and got maternity leave.”

Participants also said the sixth annual BIGUF convention enabled them to expand their knowledge and skills and network with their peers.

“This type of convention gives us an opportunity to meet other union leaders and to get closer to each other,” said Skikdar. “Not only the leaders joined the program but also the members of the union were here.”

Mim Akhter, general secretary of the Dress and Domestic Workers Union, said she learned a lot speaking with other union leaders and now plans to “spread that knowledge among the general workers of the factory.”

Mim took part in training programs where she said she gained helpful knowledge, especially “how to deal with management” and “what is good and bad for the workers.”

Tania Akhter said the convention allowed factory leaders the meet and discuss mutual issues. “I feel very happy after seeing lots of workers together under one roof. As a leader, I am always trying to play a significant role in establishing worker rights,” she said. 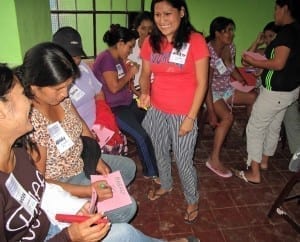 Rosa Pérez was brought to Lima, Peru, from the country’s Northern Sierra when she was a child to work as a domestic worker. As a young adult, she moved to the farming region of La Libertad to make her own way as an agricultural laborer. Thirty years, four children and five grandkids later, Perez has become a bold advocate for her co-workers. She encourages them to document and speak out about problems such as sexual harassment and inadequate safety and protection equipment and training.

The initiative gained momentum after Pérez traveled to São Paulo, Brazil, last year to participate in the Solidarity Center conference, “Women’s Empowerment, Gender Equality and Labor Rights: Transforming the Terrain.” There, she addressed more than 100 women from around the world and described working conditions for women farm workers in Peru and the actions that her union and FENTAGRO are taking to build a better life for women like her daughter, who works alongside her.

Pérez took the strategies she learned from activists at the conference to the farm worker federation’s leadership Friday, the eve of International Women’s Day. Along with the Solidarity Center, Pérez is recommending that La Libertad’s three unions meet with regional government officials and possibly employers to advocate for literacy programs targeting working women. She also plans to propose an awareness-raising campaign for men and women about sharing domestic and family care. The Solidarity Center has also been working with unions to strengthen their arguments for collective bargaining with employers in support of maternity and breastfeeding benefits that are codified in Peruvian law but not generally enforced.

Following the Women’s Empowerment conference, Perez worked with the Solidarity Center to identify 12 dynamic women from three export-oriented agriculture farms to take part in a Solidarity Center training this year geared toward building women’s confidence and strengthening their leadership skills so they can effectively advocate for women workers’ issues within their unions, their workplaces and their communities.

One of the workers who joined the training, Apolonia, is an elected officer in the Union of Agrícola Viru Workers (Sindicato de Trabajadores de la Empresa Sociedad Agrícola Virú, SITESAV). She grows and harvest fruits and vegetables as part of Peru’s export-agriculture industry, which, in 2013, generated $33 million in exports to the United States. She advises her fellow co-workers, especially young women, about how to stay healthy and build strong families while working between 12 hours and 14 hours a day and earning an average daily wage of $12.

Apolonia and other participants in the two-day training discussed how they can improve workplace safety and other issues and shared their dreams about bettering their workplaces, unions and households.

Two weeks after the leadership training, nearly all of the women who participated in the workshop, including Violeta and María Luna, who had been reluctant to speak in public, co-facilitated small workshops with groups of their peers using the new techniques they learned from the Solidarity Center training, including public speaking and one-on-one-contact to encourage self-confidence and participation.

The La Libertad network of women farm workers now has a compact disk with the stories of 32 Peruvian women leaders they can share in small study circles or at worker assemblies and when training other groups of women. It is the beginning of a much longer process that already has helped a group of powerful women to find their voice and begin to use it.