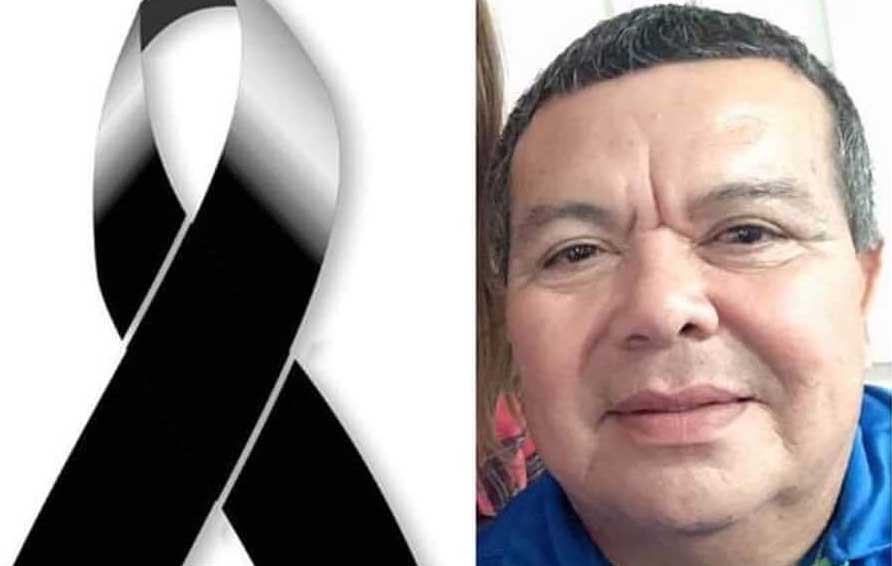 The international human rights community is condemning the murder on Saturday of Jorge Alberto Acosta, executive member of the Workers’ Union of the Tela Railroad Company (SITRATERCO) and president of the union’s Savings and Credit Cooperative section.

The assassination follows more than a year of death threats that Acosta documented with the Anti-Union Violence Network in Honduras. According the Network, Acosta said he was informed by the Honduras’ National Anti-Extortion Force (FNA) on April 14, 2018, that three people had set up an operation near his house to plan his execution. Previously, FNA informed him of the capture of an alleged gang member who confessed there was a plan to kill him.

In May 2018, the Honduran state issued protective measures for Acosta due to the risks he faced for his human rights activity. Physical assaults, death threats, surveillance, attacks and burglaries against other union officers also have been documented and reported.

During 2018, the SITRATERCO Executive Committee sought out the Honduran government’s relevant law enforcement and human rights agencies to denounce a series of systematic acts of anti-union violence directly related to their work. 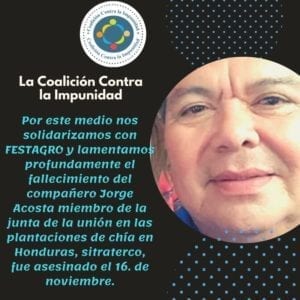 In a statement, four members of the U.S. Congress condemned the murder and said the Honduran government must thoroughly investigate and prosecute the assassination.

“The labor movement of Honduras is in more danger than ever. Yet the Honduran government fails to provide the legally mandated protection systems, does not investigate or prosecute those who threaten or kill union activists, and utterly fails to enforce its own labor laws,” the lawmakers said in the statement. “As the AFL-CIO and Honduran unions have documented, the government of Honduras has failed to comply with its legally mandated obligations under the Central American Free Trade Agreement (CAFTA) to prevent anti-union violence, among other rampant violations.”

The agricultural worker federation FESTAGRO and its affiliated unions joined the call to demand justice for Acosta, #JusticiaparaJorge. The agricultural unions, whose members have been threatened, attacked and murdered in recent years for their efforts to seek basic rights on the job, urged the government to protect threatened rights activists.

“We demand immediate protection of the leaders from various unions who fight to improve the living conditions of the Honduran population and mainly in the agricultural sector, where violence is more marked and continuous. According to the report of the Network Against Anti-union Violence, more than 70 percent of attacks occur in this sector,” FESTAGRO, a longtime Solidarity Center partner, said in a statement.

In August, 55 members of Congress sent a letter to the U.S. Trade Representative and the Acting Secretary of Labor citing ongoing labor and human rights violations, including anti-union violence and threats at Honduran plantations as repeated violations of the CAFTA labor chapter. For example, workers’ efforts to form unions affiliated to FESTAGRO have been violently repressed. SITRATERCO, the union that founded the Honduran labor movement, is also a founding member of the FESTAGRO federation.

In 2012, the AFL-CIO and 26 Honduran unions and civil society organizations filed a complaint under CAFTA’s labor chapter. The complaint, filed with the Labor Department’s Office of Trade and Labor Affairs, alleges the Honduran government failed to enforce worker rights under its labor laws. In a February 2015 report, and again in October 2018, the U.S. Trade and Labor Affairs office documented that the Honduran government demonstrated no progress on emblematic cases or systematic rights violations.