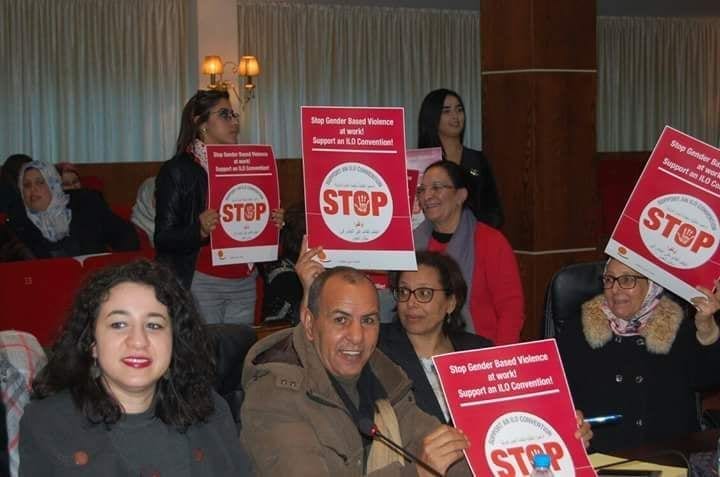 Women union activists and their allies in Morocco and Tunisia celebrated International Women’s Day this week with events that highlighted the need for a global standard to address gender-based (GBV) violence at work.

“Violence is escalating dramatically. Without an international agreement and deterrent laws that protect women at home, in society and in workplaces, we cannot move forward,” says Saida Ouaid, a member of the Executive Office of the Democratic Confederation of Labor (CDT) in Morocco.

Ouaid and other women union leaders and allies took part in a March 6 event “Toward an International Convention for the Elimination of Gender-Based Violence in the Workplace” at the Parliament in Rabat, in coordination with Morocco’s Secretariat of Equity and Equality. 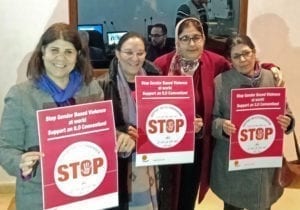 The International Labor Organization (ILO) is considering a convention (regulation) that would address violence and harassment against workers. The Solidarity Center is part of an International Trade Union Confederation (ITUC) campaign for passage of a strong ILO convention.

In Tunisia, 100 union members from across the country gathered for a March 8 event where they also discussed the need for passage of an ILO convention on gender-based violence at work.

“The gathering is an opportunity for women to stand up for their struggles to defend their rights and freedom, and to promote equality and an environment free of  violence,” Samir Al-Shefi, deputy general-secretary of the General Union of Tunisian Workers (UGTT) Women, Youth and Association, said in opening the event.

Naima Hammami, one of two women on the UGTT’s executive office, paid tribute to the struggles of Tunisian, Palestinian, Syrian and Arab women around the world. The event was sponsored by UGTT’s Women, Youth and Association Department, together with the Solidarity Center.

At both the Morocco and Tunisia events, experts discussed preliminary findings on gender-based violence at work based on participatory field research sponsored by the  Solidarity Center and CDT in Morocco and the UGTT in Tunisia.

Discussing the research in Morocco, Najat Al-Razi, a gender specialist and sociologist, says gender-based violence is “widespread in the world of work,” and “the most common form of violence against women in workplaces is sexual harassment.”

Asma al-Marani, a member of the Moroccan Union of Labor and the Arab Trade Union Confederation, pointed out that her union receives daily complaints about violence at work from  women working in the precarious and informal economy.

CDT leaders noted that as part of the global campaign for an international convention on the elimination of violence in the world of work, the union will continue meeting with a range of allies at the grassroots level until the Geneva Conference with a campaign to push the government to support the ILO draft convention, supplemented by a guiding document implementing the convention.

Representatives from the Njda Center, the Jusour Association, the Women’s Labor Union, the Association of Women for Equality and Democracy (Afed) and other union leaders and journalists also took part in the Rabat event.