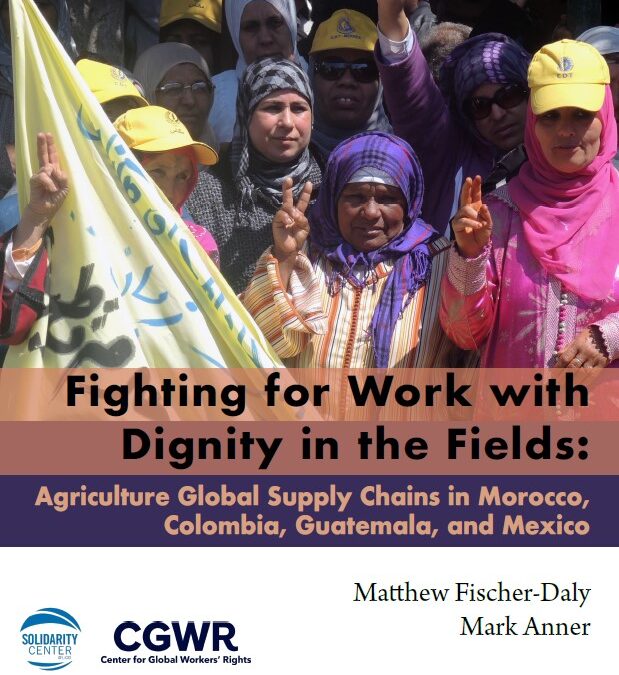 Where unions establish collective bargaining, they initiate the strongest mechanism for protecting agricultural workers’ rights, health and dignity according to a new report prepared for the Solidarity Center by researchers at Penn State’s Center for Global Workers’ Rights (CGWR).

“Fighting for Work with Dignity in the Fields: Agriculture Global Supply Chains in Morocco, Colombia, Guatemala, and Mexico,” seeks to understand employment relations in agricultural global supply chains and the struggle for dignity and empowerment of workers who are providing the world’s food. The report analyzes five agribusiness sectors including palm oil in Colombia, bananas in Guatemala, strawberries in Mexico, and grapes, olives and wine in Morocco.

In all four countries and five sectors, workers’ collective action has been “almost entirely responsible for increasing respect for workers’ rights” in a context where: 1) governments are constraining worker rights in favor of maximum employer flexibility in support of national, export-oriented development policies and, 2) global retailers are putting downward pressure on wages by curtailing the amount of capital that production workers might negotiate over with their employer for wage increases.

Researchers found that—where established—unions are performing the task of government to protect workers’ legal rights, increasing stability in otherwise precarious employment sectors and providing a mechanism for women to advance gender equality in job status and earnings as well as address rampant gender-based violence associated with their jobs—including transportation to and from the workplace. For example:

Women, who comprise between 50 percent and 70 percent of the informal workforce in commercial agriculture, are especially vulnerable to sexual harassment, physical abuse and other forms of gender-based violence at work. Unions are addressing the gender-based violence that is common in all five sectors studied, as well as gendered pay discrimination and division of jobs that reduces women workers’ earnings, as follows:

Although union density remains extremely low in all sectors studied, the report concludes that, “[w]here workers are able to unionize and collectively bargain, conditions improve, wages increase and gender-based violence is curtailed,” and that increased union density and collective bargaining coverage will expand these improvements.