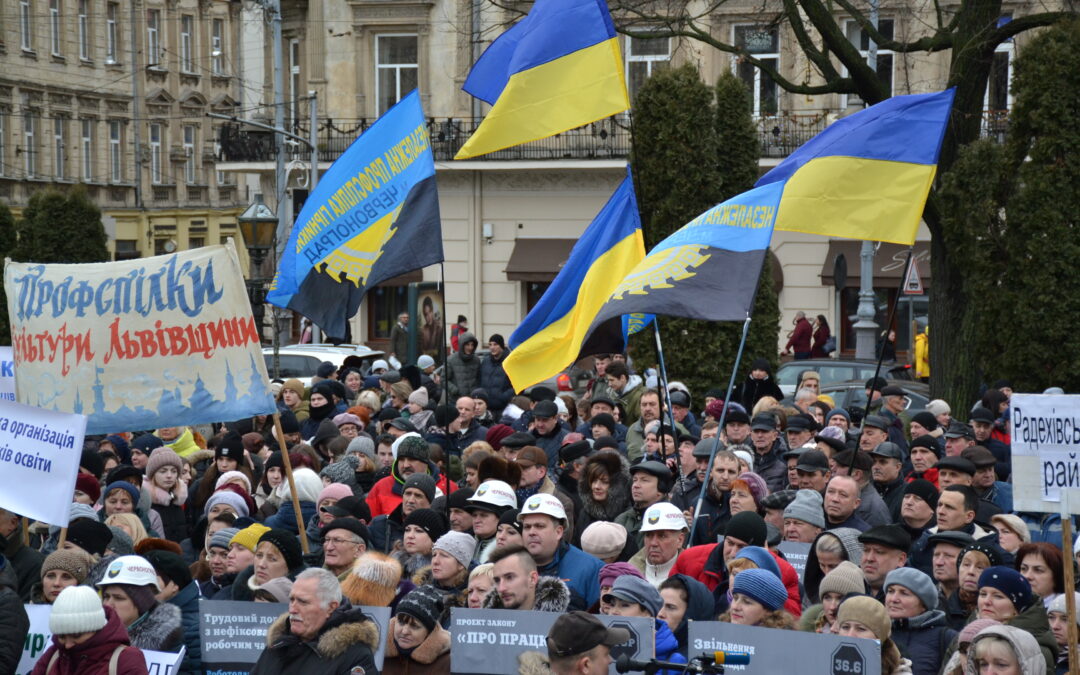 KVPU members rally together for the rights of working people in Ukraine. Photo: KVPU

Flagging a high number of work-related deaths and life-altering injuries in the country during the first ten months of this year, Solidarity Center partners Confederation of Free Trade Unions of Ukraine (KVPU) and Federation of Trade Unions of Ukraine (FPU) are educating their members and leadership on how to better protect themselves at work despite an erosion of worker rights under martial law—and monitoring and pushing back on any further deterioration of the country’s labor legislation. While the increase in work-related deaths and injuries endangers all workers, those charged with restoring or rebuilding essential infrastructure destroyed during Russia’s military aggression against Ukraine are especially at risk.

“We support the Ukrainian government and people as they defend against Russian attacks, but weakening worker rights will not make that defense stronger,“ says Solidarity Center Europe and Central Asia Regional Program Director Rudy Porter.  “If workplace safety standards are ignored or not enforced, the increase in unnecessary workplace deaths and injuries will make defending the country more difficult.”

ILO member states, including Ukraine, are required to respect and promote all five ILO fundamental principles and rights at work, regardless of their level of economic development and whether they have ratified relevant conventions.

In the first nine months of 2022, 474 workers died in the workplace—half in war-related incidents—and 4,426 workers were injured in work-related accidents, according to data from Ukraine’s Social Insurance Fund. Even before the war, Ukraine had a high number of occupational injuries: On average, 4 000 employees suffer from work-related accidents in Ukraine each year, of which almost one in 10 dies.

Should workers be injured or killed, they and their families will struggle to access compensation from Ukraine’s Social Insurance Fund due to significant delays in the investigative process required to trigger payouts, say Ukraine’s unions. Although the State Labor Service (SLS) has proposed remedial measures to speed up such investigations, martial law provisions this year have reduced the SLS to an advisory-only entity that cannot effectively require employers to comply with remaining occupational health and safety protections, such as provision of adequate safety training and personal protective equipment. Under martial law, for example, and by order of the Ukraine Cabinet of Ministers starting in March, the SLS was required to suspend all unscheduled occupational safety and health inspections.

In heroic acts, especially on the front lines, Ukraine’s workers are risking life and limb to restore infrastructure such as electricity, roads, buildings and bridges. For example, last month a team of five repairmen in Ukrenergo reportedly worked more than six hours while suspended at a height of more than 300 feet in freezing cold, while risking artillery fire, to repair damage to a high-voltage overhead line.

In a significant assault on worker rights, Ukraine’s parliament earlier this year moved forward with legislation that deprives around 73 percent of workers of their right to union protection and collective bargaining during martial law, despite strong national and international condemnation on the grounds that it violates key ILO Conventions.