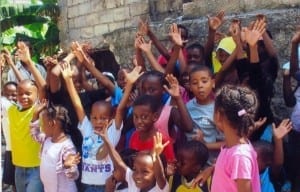 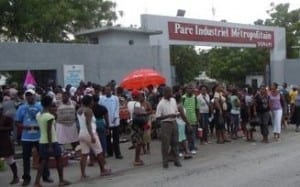 Three years after the devastating 2010 earthquake, Haitian workers are organizing to ensure that foreign investment and infrastructure-targeted aid provide not just subsistence-level jobs, but decent work and a living wage for Haitians.

“We don’t want ‘Haiti Open for Business’ to become ‘Haiti for Sale,’ said Etant Dupain, a Haitian journalist and director of the community organization, Bri Kouri Nouvel Gaye (Noise Travels, News Spreads). Dupain relayed his concerns at a recent panel discussion in Washington, D.C., focusing on worker and community empowerment programs designed to enable Haitians to have a voice in their country’s redevelopment process. The panel was organized by the Solidarity Center and TransAfrica.

Panelists worry that average Haitians—still trying to recover from a series of disasters and a long history of economic and political setbacks—are getting lost in the rush of money and plans from foreign investors and donors, who have not always consulted with Haitians about what is needed. In order to play a stronger role in civil society, Haitian unions are very focused on the need to inform, educate and mobilize workers and the community about their right to participate in the workplace and broader social debates that shape their lives, especially with respect to new economic developments in the country.

Construction of new infrastructure and factories has begun, though hundreds of thousands of people remain homeless. Encouraged by valuable tax and other incentives, including low wages, garment and light-manufacturing tenants are moving into new and existing industrial parks.

“Haitians are used to working hard; they want jobs. But they must have the right to make these good jobs. Good jobs pay a living wage, respect the right of workers to organize and bargain collectively with employers.”

In March 2011, the Solidarity Center published a living wage survey which found that prices for necessities and basic goods were out of reach for most apparel workers. This remains true today: The cost of living has increased while wages, for those lucky enough to have jobs in the formal economy, have stagnated.

One potential area for job creation is the new Caracol Industrial Park in northern Haiti, which was inaugurated and began initial operations in late 2012. Established as a consequence of trade preferences established under the U.S. Congress’s passage of the HOPE II Act of 2008 and the Haiti Economic Lift Program (HELP) Act of May 2010, Caracol is supposed to support up to 65,000 permanent jobs over time and increase Haitian garment industry related jobs by more than 200 percent. The Solidarity Center estimates that 1,500 workers currently are employed in Caracol, and there are now two registered unions.

Solidarity Center partners are concerned that the park will not create jobs paying workers sufficiently to support their families and rebuild their lives and their country. Caracol is being presented as a model, said Etant Dupain. “If everyone has a place at the table it will be a great project,” he said. But if regulations are not followed and enforced it will set an unfortunate precedent for new industrial processing zones and industrial parks in Haiti.

To help ensure that Haitians have a greater voice in the future of their country, Haitian unions are increasing their capacity to participate in several forums involving the government, employers and civil society.  Their participation in these venues is supported by the work of the Solidarity Center and the International Trade Union Confederation -Trade Union Congress of the Americas (ITUC-TUCA) as well as by community organizations supported by TransAfrica’s Let Haiti Live project.

Building Worker and Citizen Capacity: By strengthening the capacity of workers and the community to advocate for and defend their interests through outreach, leadership development and organizing, unions will be well-positioned as independent, democratic and self-sustaining organizations to lead the drive for a better life for Haitian families.

Social Dialogue: Union leaders participate in monthly meetings of a Social Dialogue Table – a tripartite mechanism convened by the International Labor Organization’s (ILO’s) Better Work Haiti project that monitors the factories and provides factory-by-factory data for the ILO’s biannual worker rights compliance reports.  Under the auspices of the Commission Tripartite de la Mise en Oeuvre de la loi HOPE—also known as the CTMO-HOPE Commission—union leaders participate in tripartite discussions seeking to resolve problems in the textile and apparel sector in Haiti that are not resolved at the factory level. The Solidarity Center and ITUC both have official observer status in these meetings to lend support to the unions’ perspectives. Both organizations are also providing technical assistance to Haitian unions to raise their capacity to effectively participate in social dialogue.

Labor Code Reform: Haitian unions are active participants in the labor code reform process that is being directed by the ILO. Unions convened workers across all sectors and also worked closely with community associations to gather data for worker input into the tripartite process. Through this process, the trade union movement, employers and the Haitian government have each presented formal proposals to the ILO for changes to the current labor code. The unions’ proposal calls for provisions for the new Haitian Labor Code such as: respect for freedom of association and collective bargaining; distribution of the labor code in Creole; a national minimum wage by sector; coverage of workers across all sectors, including informal and agricultural workers; improved social protections for Haitians, including disability insurance, pensions and health care; banning all forms of discrimination in the workforce; establishment of a viable mechanism for enforcement of the labor code; a small payroll tax to fund capacity building for workers to advocate for their interests; protection of domestic workers; capacity building for government labor officials and the establishment of regional government labor offices.

Two years after a massive earthquake destroyed much of Haiti’s capital, Port-au-Prince, and surrounding towns, the Haitian people are still struggling to recover from the disaster and the entrenched poverty that it has exacerbated.

The solution, say Haitian workers, is a Haitian-driven reconstruction effort that focuses on sustainable, equitable development aimed at improving the lives all citizens—not just a few.

While unions and worker organizations have been calling for the creation of decent jobs that respect fundamental worker rights, pay living wages, and empower Haitians to provide for their families, little progress has been made toward that goal. Indeed, more than 70 percent of the labor force does not have formal work and struggles to survive, earning less than $2 a day.

To mark the grim anniversary, worker organizations are participating in marches and discussions organized by the larger community to draw attention to the enormous needs in Haiti. They also are educating workers and the community about their rights while continuing to provide the opportunity for workers from various sectors, both employed and unemployed, to meet. The Haitian labor movement has crafted a pubic policy statement of principles on decent work and a living wage, which it will release later this month. Workers plan to press for further improvements.

“The deplorable conditions in which most Haitians live are in stark contrast to the small pockets of improvement and the large-scale investments coming into the country. For those left homeless, access to the very basics—permanent shelter, food, jobs, water, transportation—is elusive,” said Ose Pierre, the Solidarity Center’s program representative in Haiti. “Much, much more needs to be done to create jobs and, at the same time, ensure that workers are paid decent wages and their rights are recognized and respected.”

The Solidarity Center, which focuses on building the capacity of Haitian partners to develop and jointly advocate public policies that help working families, published a living wage survey for apparel workers in March 2011. The research found that prices for necessities and basic goods were out of reach for most workers. This remains true today: The cost of living has increased while wages, for the jobs in the formal economy, have stagnated.

“Haiti’s recovery will depend on the ability of working people to earn a decent wage so that they can pay the rent, feed their children, and live a dignified life. Grinding poverty is never solved through low wages or exploitation,” said Molly McCoy, Solidarity Center regional director for the Americas. “Our partners remain hopeful that the large-scale investments coming into Haiti, including the Caracol Industrial Park, create jobs that pay workers sufficiently to support their families and rebuild their lives and their country.”

The Solidarity Center Response after the 2010 Earthquake

In a matter of seconds, the earthquake dramatically altered the scale and scope of the Haitian labor movement. Trade unions and worker organizations suffered huge reductions in membership due to mass casualties and severe unemployment. Many people were further burdened by catastrophic damage to their homes and belongings.