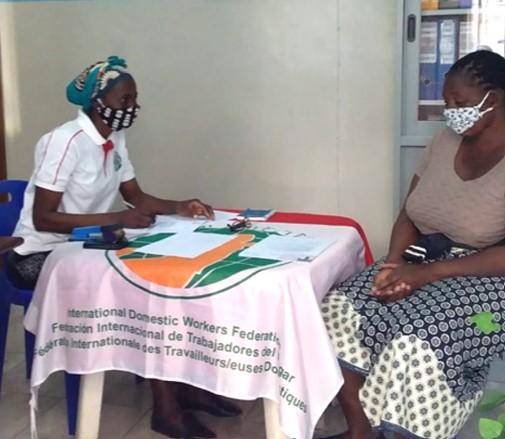 The International Domestic Workers Federation (IDWF) is urging more than 25 Africa-based affiliates to use the results of a new survey documenting the suffering of Africa’s domestic workers and their dependents during the pandemic to lobby their governments for urgent reform. Conducted by domestic workers with 3,419 of their peers in 14 African countries from November 2020 through January 2021, the survey found that only 17 percent of respondents received emergency income, food or other state-provided social support—and that most of that number received such support through another household member because they were not themselves eligible.

“It’s one thing to lose your job, it’s another thing to lose your job in a context where you don’t have access to unemployment benefits, social security or any income support,” says IDWF Lead Research Associate Louisa Acciari and post-doctoral researcher at the Federal University of Rio de Janeiro. “I think this is something where the unions can really campaign at the national level to get more inclusive social protection policies.”

Only 6 percent of those unable to work received employer-provided wages, while almost one-third of survey respondents were laid off—85 percent of whom were the main family breadwinner. They received no severance pay and remained out of work for up to six months. Nearly half of survey respondents suffered income reduction that had a dramatic impact on their household and was exacerbated by rising food and transportation costs.

During a recent event, IDWF leaders urged affiliates to use survey data in national campaigns lobbying their governments for inclusion of domestic workers in unemployment, health insurance, injury and illness compensation, and pension schemes, and for ratification of ILO Conventions ILO Conventions 189 on Domestic Workers and 190 on Violence and Harassment.

“Now we have an additional tool to fight until we get our rights, our social protections. People will remember what we say if they hear us saying [it] with numbers,” said IDWF General Secretary Elizabeth Tang.

“Through it all, the IDWF has shown the world that we are united,” said IDWF President and General Secretary of the South African Domestic Service and Allied Workers Union (SADSAWU). “There is much more to be done.”

Based on survey findings, IDWF recommendations include that governments:

“The Impact of COVID-19 on Domestic Workers of Africa” survey is part of a global IDWF research project that includes Latin America and the Middle East and North Africa. Around the world, the pandemic has vastly widened gender, racial and economic divisions. CEOs have raked in record profits during the pandemic, and 8 of the 10 wealthiest people in the world have grown billions of dollars richer over the past year. On the other side, domestic workers, agricultural workers, trash collectors, street vendors and a growing number of gig workers employed through app-based services were recognized as essential over the last year and hailed as heroes, yet are among the most economically undervalued and underserved. The COVID-19 crisis cost women around the world at least $800 billion in lost income in 2020, equivalent to more than the combined GDP of 98 countries, said Oxfam last month.

The Solidarity Center partners with the IDWF around the world, supporting domestic workers’ efforts to access their rights. As of April 2021, the IDWF has 81 affiliates from 63 countries.