Racing to help the more than 640,000 people affected by massive flooding along coastal Peru, trade unions, faith-based organizations, academic institutions and other civil-society organizations have mobilized to ensure lifesaving supplies and other items reach affected communities. 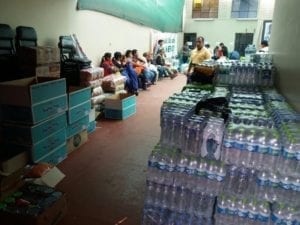 Since December, two dozen provinces in Peru have witnessed a period of intense rains and destructive mudslides that have killed 75 people, affected 157,000 homes, inundated hundreds of acres of farmland and destroyed 1,100 miles of public roadways and 159 bridges. The Peruvian government is working to clear roadways and affected areas of debris. Infectious diseases spread by mosquitos, including dengue and Zika, are now an increasing concern for communities where standing water is an issue. The Peruvian National Weather Service has projected that the rains will continue through the first week of April. 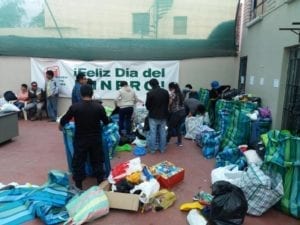 A range of unions in Peru are providing assistance to workers and their families displaced from recent flooding. Credit: Rommel Arenas

The National Federation of Textile Workers, FED-CUT (healthcare workers federation), confederations such as the Peruvian General Workers Confederation (CGTP), the National Federation of Peruvian Textile Workers and local unions in the mining sector in Arequipa are collecting drinking water, non-perishable food, clothing and other basics for their members and affected communities. Unions are slowly beginning to distribute assistance as roads become passable.  The Peruvian Federation of Civil Construction Workers (FTCCP) has led rebuilding efforts of homes in Lima.

“For example, farm workers in La Libertad, one of the areas hardest hit, cannot go to work because there is no way to get to their workplaces or move product. These workers—who don’t make a decent wage as it is—are not being paid at all now,” she said. “Meanwhile the prices of food and consumer goods have increased because of reduced supply and price gouging. This is a disaster that will have the ripple effects of increased poverty, hunger and isolation for Peruvians outside of Lima.”

Flooding is not a new phenomenon on the Peruvian coast, however rains have intensified over recent years. Many of the most affected provinces have budgets for disaster risk reduction, prevention and relief. However a recent investigation shows that much of the funding to mitigate life-threatening natural disasters has gone unspent.

The CGTP is blaming corruption and indifference for the loss of life, widespread damage, lack of basic services and scarcity of food, water and medicines in affected areas. In a statement, the CGTP demands that the national government sanction local authorities who did not address their region’s vulnerability to flooding and put their citizens at grave risk. The confederation also calls for tax breaks for the wealthiest individuals and companies—such as exemptions for the mining industry—to end and the immediate collection of past-due corporate tax debt to help pay for a speedy recovery.

The Solidarity Center encourages anyone interested in helping to donate to the Red Cross in Peru and will announce later If Peruvian unions seek additional funding for their relief efforts.