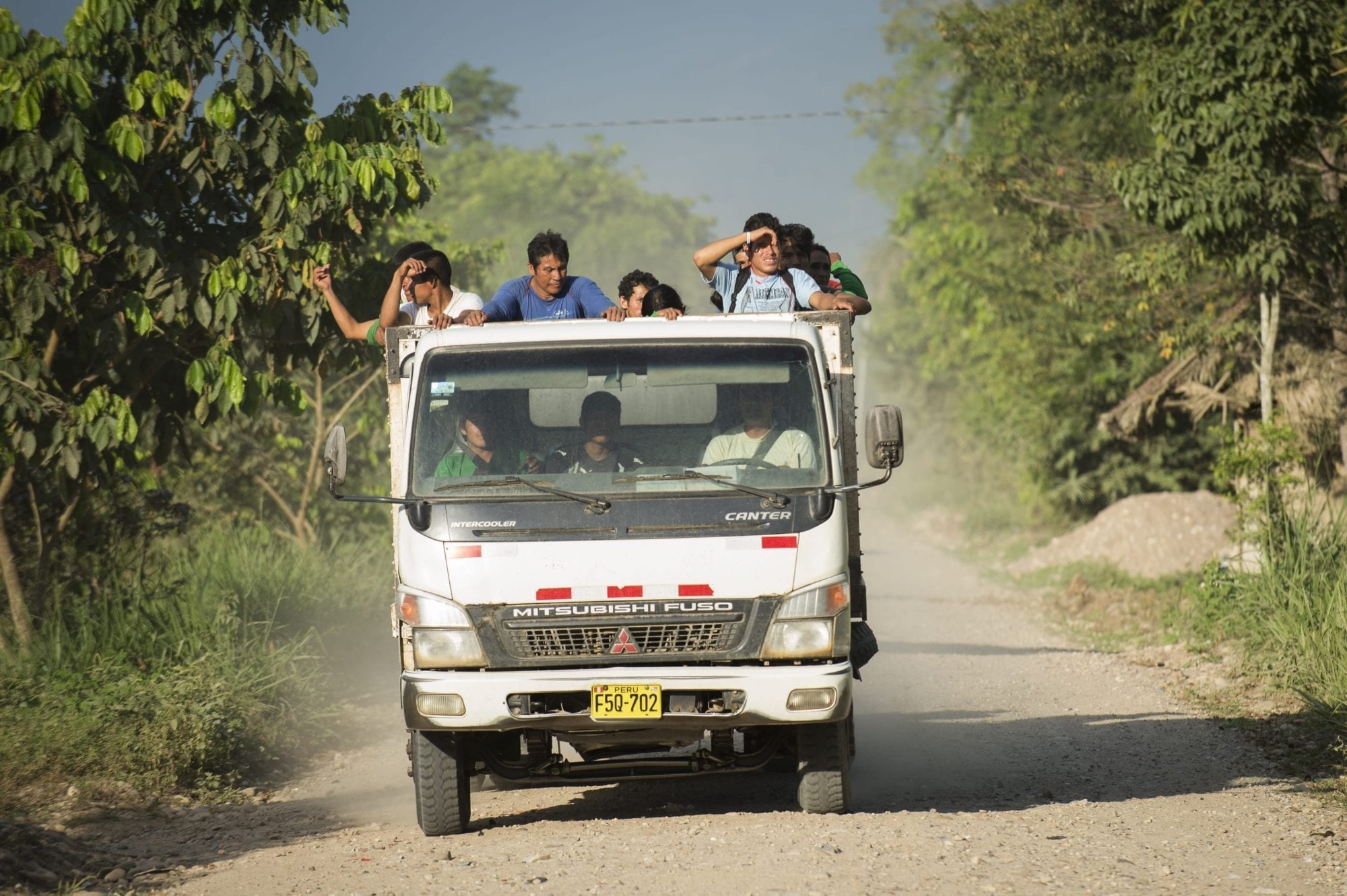 Workers of Palma del Espino arrive at Fray Martin camp, in San Martin, Peru, at the end of a work day.

In Peru’s export sector, textile workers and agricultural laborers typically earn low wages and receive few or no benefits, like paid sick leave, work in dangerous and unsafe conditions, and often are fired when they form a union to improve their lives on the job, according to Juan Carlos Vargas, an economist for the Labor Development Program in Peru (PLADES).

“Agricultural workers have less vacation time, less compensation for unfair dismissal or receive minimum remuneration,” say Vargas. Textile workers typically are hired on one- to two-month contracts, which do not allow them to plan for a stable future, he says.

“My contract, like that of other workers, is one month and 15 days,” says Carmen Pérez, a textile worker who has toiled 10 years at the same factory. “I am afraid to plan to have a child because I know that at any moment (the company) can fire me.”

The Dark Side of ‘Made in Peru’

Pérez  and other workers in Peru’s export sector discussed their struggles in a new video, “The Dark Side of ‘Made in Peru,’” produced by unions and other nonprofits to highlight the precarious working conditions and lack of freedom to form unions in the Peruvian textile and agro-export sectors. The workers describe laboring long hours for low pay, working for years without knowing if they will have a job for more than a few weeks at a time and being fired when they collectively try to improve their workplaces and working conditions.

Peruvian organizations hope that the campaign will open a dialogue with the new administration of President Pedro Pablo Kuczynski on their proposed labor regulations that would strengthen the enforcement of labor rights for temporary contracted workers, and tighter oversight on registration and proper use of temporary contracts.

Union leaders from the textile and agro-export sectors recently discussed the difficult environment for workers with U.S. Secretary of Labor Thomas Perez, U.S. Ambassador to Peru Brian Nichols, Deputy Undersecretary of Labor Carol Pier and others at a meeting in Lima, Peru, hosted by the Solidarity Center. One participant, Lorena Chavera Caceres, secretary general of the Union of Camones Textile Workers, described how she was fired from her job at a textile factory for forming a union but ultimately empowered by learning about her rights through the Solidarity Center.

“The growth of the export sector has been accompanied by a lack of enforcement of labor rights,” says Juan Jose Gorriti, secretary of international relations at the General Workers Confederation of Peru (CGTP). “We cannot allow the competitiveness of the Peru brand to come at the cost of precarious employment conditions.”

The exponential growth in textile and agriculture in recent years also has not been reflected in the increased income for workers, says Vargas. “There is international competitiveness but at the expense of workers ‘ wages.”

Textile and agricultural workers are covered under dated labor laws that extend far fewer rights to them than to workers in other sectors, say union leaders, economists and other policy experts.

Unions and their allies are seeking legislative changes that will limit short-term contracts to five years, after which a worker must be given full-time work; increase the number of labor inspectors and bolster workplace inspection; and strengthen enforcement of workers’ right to form a union without retaliation, bargain collectively and strike—all rights covered under laws governing the textile and agro-export sectors.

Pedro, who has worked in a textile factory since 1999, says workplace conditions significantly improved after workers formed a union there in 2008. “Through unionization we achieved many things,” he says. “First of all, that the eight-hour day was respected.” Yet Pedro says his employer constantly harasses him for his active role in the union and fired him while he was in contract negotiations, an activity protected under the law.