In Cambodia’s booming construction industry, where up to 250,000 workers toil on building projects during peak season, laborers wear sandals or flip-flops and cloth gloves, if they have gloves at all, their heads covered only with towels or soft hats they bring to work.

One-third are women, who receive lower wages and are limited to the least skilled tasks that offer no opportunities for training and advancement. These construction workers risk their lives each day on the job, scaling tall structures without harnesses, helmets or other safety equipment and often are not paid for weeks. Their wages are disproportionately lower than the wages of foreign workers. At one site, for instance, a foreign worker receives $1,000 per month with a $300 allowance while his Cambodian colleagues receive between $160 and $240 a month.

Cambodia’s construction industry is one of the fastest growing sources of employment. In 2015, construction became the most dynamic driver of the country’s gross domestic product (GDP), outpacing the country’s garment and footwear industries. Corporations from China, South Korea, Japan, and Thailand—at least 18 countries in all—have directed 284 projects, a construction area nearly five square miles worth $4.3 billion, between 2000 and August 2016.

The country’s lack of a labor inspection system to ensure compliance with national labor law allows employers to avoid receiving fines or other punitive measures when workers are injured on the job or are paid subminimum wages. As a result, construction workers do not have access to fundamental workplace rights like safety equipment, as stipulated in the country’s labor laws. Workers also receive little or no safety training.

“Based on a report we conducted in 2015, we discovered that more than 2,000 construction workers have been injured on construction sites,” says Yann Thy, secretary-general of Building and Wood Workers Trade Union Federation of Cambodia (BWTUC). “Out of this figure, 36 died.”

Yet when they seek to form unions and improve their working conditions, they often suffer retaliation, violence and imprisonment, as do garment workers and other workers across Cambodia, according to the International Trade Union Confederation (ITUC).

A 2016 trade union law further limits workers’ ability to negotiate over their working conditions and pay. Cambodia is now one of 10 countries ranked the worst for working people, according to the ITUC’s annual Global Rights Index.

Despite the obstacles, BWTUC, assisted by the global union, Building and Wood Workers International (BWI), the Solidarity Center and other international rights organizations, assist construction workers across Cambodia to form unions, enabling workers to break the cycle of poverty perpetuated by low-wage, dangerous jobs. 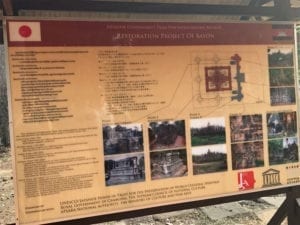 When tourists enter Cambodia’s massive Angkor Archaeological Park, they are greeted by stunning temples carved with intricate sculptures built for the Khmer Empire, ruler of a large portion of Southeast Asia between the ninth and 15th centuries. Spreading over 154 square miles, the complex contains hundreds of buildings and monuments that had long decayed in disrepair.

Many buildings have now been restored, and while tourists encounter ancient structures resembling their original state, they are less likely to notice the construction workers laboring in often brutally hot conditions to make tourists’ trips Facebook friendly.

As a World Heritage site, Angkor is covered by United Nations Educational, Scientific and Cultural Organization (UNESCO) restoration and conservation guidelines which provide for architectural and environmental safeguards—but include no such protections for workers.

Chhen Sophal worked for years on the massive Baphuon Temple, eating little for lunch and dinner so he would have enough money to support his family.

With support of a union federation that later merged into BWTUC, and the global union movement, the workers held an official union election and ultimately negotiated with their employer, raising wages to $15 a day and securing payment in dollars, which are more easily exchangeable than the Cambodian riel. Through ongoing pressure, they also ensured their employer keep its commitments to provide health care, workplace safety improvements and full implementation of 18 days paid annual leave.

Yet Chhen Sophal, who was a union leader at the site, knows that hundreds of thousands of construction workers across Cambodia still receive below-poverty wages, and he seeks to improve conditions beyond his workplace.

“In the future, I hope that we will be able to push for a sector minimum wage for the restoration workers,” he said through a translator. “I want to stand up for wages for next generation—even outside of restoration and construction sector.” Chhen Sophal says he wants to ensure that if his children become construction or restoration workers, they will receive decent wages and their workplaces will be safe.