Kailash Satyarthi, a Solidarity Center ally, won the Nobel Prize in 2014 for his lifelong efforts to end child labor. He began this work much earlier, in 1986 in Jharkand province—one of India’s poorest regions at the time, a place where child labor was common across a variety of industries.

Since then, Satyarthi has freed more than 80,000 children. His movement, the Global March Against Child Labor, has given rise to an international network of grassroots activists spread across multiple issue areas, all combatting child exploitation. In 2015, Satyarthi delivered a petition to United Nations Secretary General Ban Ki-moon demanding that the abolition of child labor be made a Sustainable Development Goal. More than 550,000 people around the world signed it, ensuring that Sustainable Development Goal (SDG) 8.7 against child labor exists today.

Recently, Satyarthi was in Washington, D.C., to address congressional lawmakers on the situation of child labor globally. The Solidarity Center spoke with him about his Foundation’s work and the role of the labor movement in combating child exploitation.

This interview has been edited for length and clarity.

You’ve been fighting child exploitation since the 1980s. How has child labor changed in this time? 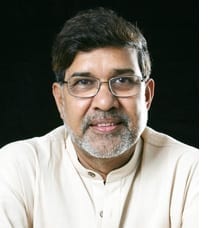 Satyarthi: The world has grown rapidly, but despite technological advancements and accumulating vast global wealth, we have not been able to safeguard our children’s freedom. Today, 168 million languish in labor while 5.5 million are enslaved. Two hundred and thirty million children are caught in conflict-prone environments. Approximately 21 million children today have been displaced and face poverty, violence and inhumane conditions. Globalization has presented new challenges: increased cyber-crime and violence against women and children perpetrated online.

But the internet has made activism more sustainable. People are more inclined to support this fight because of increased awareness and ease of access. With the advent of technology, we have been able to make significant progress. I believe if the power of the internet and young people are channeled properly, we will be able to bring justice into the lives of many children.

What role does the labor movement play in the fight against child labor?

Satyarthi: To fully realize the SDGs, the fulfillment and protection of the rights of children is central. Trade unions are indispensable to this mission in two ways.

First, while workers in developed nations often receive their fair and just share, their counterparts in poor nations or emerging economies are denied what is theirs by right. This creates formidable challenges, like struggling to meet daily nutrition requirements. Poor laborers then seek another pair of working hands; in most cases, it is their child’s. A strong trade union can deliver the promise of decent work and income to families and so protect the development of these children.

Second, while 168 million children labor globally, 200 million adults are unemployed.  Labor unions can help organize legal employment for these adults, as there is clearly no dearth of jobs. There are no easy solutions, but we know by experience that with the strength and resilience of labor unions, we can reach many who are voiceless working in illegitimate parallel economies.

As you noted, stable, well-paying jobs are hard to find for workers of all ages. What is the relationship between the ongoing flexibilization of work and the prevalence of child labor?

Satyarthi: Unfortunately, the concept of a fixed job is being wiped out by the relentless pressures of globalization while the movement of labor remains tightly restricted. Until the 1980s, in a country like the United States, people expected to work in a factory or office, in semi-skilled or skilled jobs until retirement. That is no longer true. It has been replaced by a concept of labor which takes us back, in some ways, to the 19th century when workers lacked job security. In this situation, it’s difficult to send children to schools and colleges. Rather, children end up working to help supplement uncertain family incomes.

What can be done to ensure that children, especially those in rural areas, are protected?

Satyarthi: Traditionally, the prevalence of child labor in farms has been widespread, meaning from children helping their families to bonded labor. Today, in relatively poor countries like India, where 50 percent of the population depends on agriculture for a livelihood, the most common form of child labor is found in farms. Until recently, it was rare to find a functional school in rural India. Some children were forced to walk over 10 kilometers (about 6 miles) to attend schools where teacher absenteeism was rampant. Here, government intervention is necessary. Education is a fundamental right and a public good and cannot be left at the mercy of market forces and private players. We have seen welfare schemes that guarantee employment to poor rural Indians and free meals to children attending school lead to a dramatic improvement in school enrollment. Much more needs to be done.

Over your career, you’ve used many strategies to fight child labor. What initiatives stand out to you as you look back on your career?

Satyarthi: During the first phase of my fight in the 1980s, the world remained ignorant as 250 million children labored globally. In the South Asian carpet industry alone, the number of child slaves working as carpet weavers was slightly over a million.  Despite conducting many on-the-ground raid and rescue operations, we were not making desirable progress.

In 1995, I started discussions with carpet manufacturers, middlemen, exporters, NGOs in India and elsewhere, and leading carpet importers in Germany and the United States. This became the inspiration behind GoodWeave. The idea was to eradicate child labor in the carpet manufacturing industry with well-placed interventions in the supply and demand chains.  I believed that after sparking the will for change, the industry could help social development by disrupting the circle of poverty, illiteracy, poor health and illegal employment.

What do you say to skeptics of GoodWeave and other consumer-based approaches to promoting human rights?

Satyarthi: GoodWeave effected a decline in child labor in the carpet industries, from over a million in the 1990s to less than 200,000 today. The most remarkable fact is that there was no decline in rug exports. Optimism among stakeholders brought about a remarkable change channeled through the power and reach of the corporate sector. If corporate and civil society can learn from our experiences with consumer-based human rights advocacy, then we can usher in a new era of globalization.

What about arguments that socially progressive policies, like compulsory universal primary education or a living wage, place an unfair economic burden on developing countries?

Satyarthi: The positive effect of placing children at the heart of policy and action is evident. If all students in low income countries acquired basic reading skills, 171 million people could be lifted out of poverty, equivalent to a 12 percent cut in world poverty. Moreover, an investment of one dollar in the eradication of child labor gives you the return of $10 to $15 in 10 years. The same applies to investment in education: Every additional year of schooling a young person receives increases their average future earnings by 10 percent, and can boost countries’ average annual GDP (gross domestic product) growth by 0.37 percent.

So, I humbly appeal to the naysayers to focus on what is measurable. Child labor never did any family or any child any good. It has to go.