‘We Can’t Wait for Men to Help Us. We Women Have to Do It’ 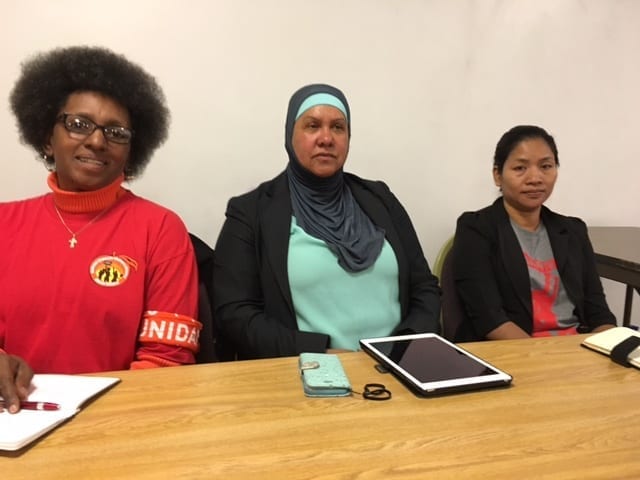 Women’s economic empowerment is linked to achieving broader labor rights for workers around the globe and women must join together no matter what their interests or jobs to bring about gender equality at work, panelists said today at an AFL-CIO panel in New York City. 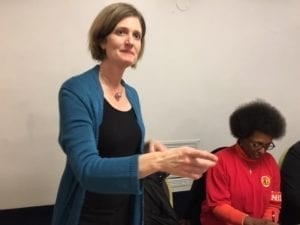 “We’re not talking about ‘women’s rights’ and ‘worker rights’—it’s one agenda that we need to bring together so we really can have women’s economic power in the world of work,” said AFL-CIO International Affairs Director Cathy Feingold, who moderated the panel. “We cannot be divided.”

Three union activists shared their experiences in helping women achieve a voice at work during “Building Power for Women Workers in the Changing World of Work.” The panel is one of several sessions the Solidarity Center and its partners are holding in conjunction with the March 13–24 meeting of the United Nations Commission on the Status of Women (CSW).

‘We Women Have to Do It’ 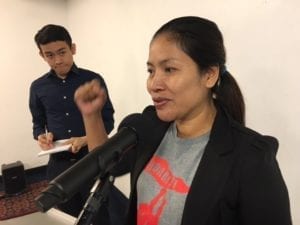 “We cannot wait for men to help us. We women have to do it”—Sophorn Yang, Cambodian garment worker organizer. Credit: Solidarity Center/Tula Connell

Sophorn Yang, a garment worker organizer in Cambodia, fired up the dozens of union activists and allies in the audience when she said,

“I’m happy to be here in room full of woman power!”

Yang discussed garment workers’ long struggle for decent wages, including a series of massive demonstrations in 2015 and 2016 in which several garment workers were killed by police and others beaten and arrested.

An estimated 700,000 workers in Cambodia sew and package more than $5 billion worth of clothing, textiles and shoes every year, nearly all on short-term contracts that make it easier to fire and control workers.

Yet even though nearly all garment workers are women, Yang said she is constantly challenged by male union leaders.

“In my country, the majority of leaders undermine my values because I am a woman,” Yang said, speaking through a translator. “They don’t know I have the will power to fight, especially in a sector where 90 percent of women workers are underrepresented, are under attack.

“We cannot wait for men to help us. We women have to do it.” 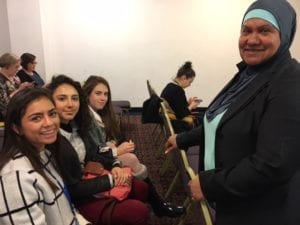 “There are more things we have in common than what divides us”—Sussie Lozada, UNITE Local 100 political director. Credit: Solidarity Center/Tula Connell

Two union activists from the United States emphasized the importance of organizing workers, joining with allies and reaching women in all job sectors and interests to build networks to strengthen women’s struggles on the job.

“We have the power to organize,” said Sussie Lozada, political director of UNITE Local 100. “Organize, build coalitions, work in cooperation—all are fundamental for us to grow and get what we want.

“There are more things we have in common than what divides us.”

Patricia Sauls, a domestic worker and leader of the Atlanta chapter of National Domestic Workers Alliance (NDWA), said joining a union empowered her to believe she could make positive change at work for herself and for other domestic workers.

“My union encouraged me to believe I do have a voice,” she said, telling participants that she was speaking publicly for the first time. “I am just so grateful for the sisterhood that is here to support me and stand by me.” 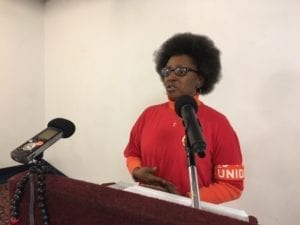 “My union encouraged me to believe I do have a voice”—Patricia Sauls, NDWA activist. Credit: Solidarity Center/Tula Connell

Sauls is part of a global delegation sponsored by the International Domestic Workers Federation (IDWF), which is mobilizing members around issues like preventing gender-based violence at work.

Joining the panel from different continents and diverse experiences, Sauls and Yang carried similar messages for their union sisters:

“We can win if we stay together and support each other,” said Sauls.

And as Yang said, “We need to come together to organize and fight, with passion, with real passion!”

Hundreds of high-level government delegates at the CSW for the first time are discussing women’s economic empowerment and the role of labor unions as core to achieving women’s rights—a huge milestone for working women around the globe in achieving recognition of their workplace struggles by the world’s human rights body—and one that worker rights organizations like the ITUC and Solidarity Center have long championed.

Follow us here, on Facebook and on Twitter @SolidarityCntr for coverage of our final event on Thursday, “Impact of Corporate Power to Women’s Economic Empowerment,” a panel sponsored by the Association for Women’s Rights in Development (AWID) and Solidarity Center.