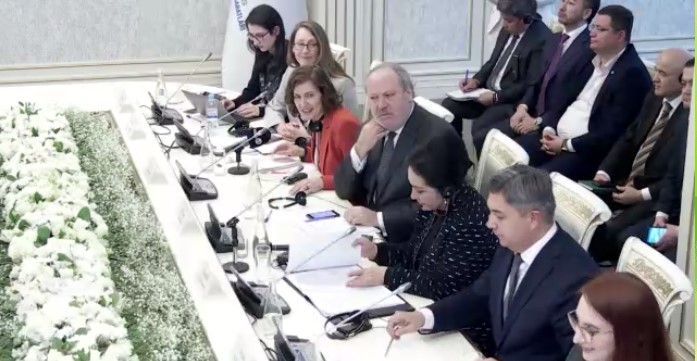 The Cotton Campaign—a global coalition of human rights, labor, responsible investor and business organizations—ended its call for a global boycott of Uzbek cotton at a public event in Tashkent, Uzbekistan, on March 10, 2022.

The Cotton Campaign—a global coalition of human rights, labor, responsible investor and business organizations—yesterday ended its call for a global boycott of Uzbek cotton at an event hosted by the country’s Ministry of Labor for media, activists and government officials in Tashkent, Uzbekistan. The announcement came as the Uzbek Forum for Human Rights released a report finding no central-government–imposed forced labor in the 2021 harvest, a success which the Campaign is proposing as a template for removing forced labor from the world’s supply chains. An estimated 2 million children have been removed from child labor and half a million adults from forced labor in Uzbekistan’s cotton sector since the multi-sectoral campaign formed.

“[We] have been looking forward to this day for over 14 years,” said Cotton Campaign co-founder and former U.S. Deputy Assistant Secretary of State for Democracy, Human Rights and Labor Bennett Freeman, who saluted the determination and courage of Uzbek-based activists and cotton-field monitors.

The historic achievement came after persistent engagement by Uzbek activists, who took on extraordinary personal risk to uncover and document forced labor, joined by multinational brands, international advocates and worker rights groups like the Solidarity Center, and a commitment by the government of Uzbekistan to end its use of forced labor. The boycott began in response to a 2009 petition by Uzbek civil-society activists that launched the Cotton Campaign’s Uzbek Cotton Pledge Against Forced Labor. Since then, 331 brands and retailers signed the pledge, including many of the world’s largest brands, among them C&A, Gap Inc. and Tesco.

“As a journalist and citizen of this country, I am proud to participate,” said Uzbek Forum for Human Rights cotton field monitor Muazzam Ibragimova, who added that her own children were likely headed to the cotton fields as recently as a decade ago.

Although Uzbek Forum’s report found that cotton was harvested without systematic state-imposed forced labor, monitors found cases of coercion and interference by local authorities, as well as individual cases of forced labor. Because independent groups that conduct field level monitoring and capacity building are unable to register and operate freely, progress is “at risk” says the Cotton Campaign in its press release. Given repressive policies that limit freedom of association in Uzbekistan and supply chain practices that have contributed to eroding labor standards in garment producing countries around the world, the Cotton Campaign is calling on the Uzbek government and brands to support worker rights as the industry is poised to grow, and for the government to open the country’s civil society to create the enabling environment necessary for responsible sourcing.

“We need a voice from the ground,” said the Solidarity Center Senior Program Officer for Europe and Central Asia Abby McGill, who added that workers must lead the charge if there is to be permanent success and continued progress in Uzbekistan’s fight against forced labor.

Cotton Campaign Steering Committee member, GLI-ILRF Forced Labor Program Director and human rights lawyer Allison Gill recognized the efforts and courage of Uzbek Forum monitors and pointed to the coalition’s success in Uzbekistan as a template for combating the use of forced labor in cotton sourced from other countries. More than one fifth of the world’s cotton is produced in China’s Xinjiang region where significant evidence of human rights abuses, including suspected forced labor, has been reported.

Uzbek Forum for Human Rights is a Berlin-based NGO dedicated to protecting and promoting human rights and strengthening civil society in Uzbekistan.