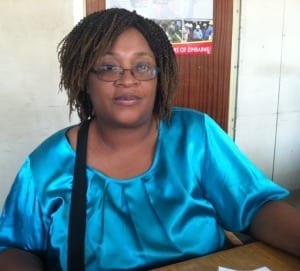 The constitution, ratified in 2013, also expands the rights of women, but to make those rights a reality, “We have to train women to know these rights and to build on these rights in the workplace,” she says.

As part of that effort, ZCTU and its Gender Department are rolling out awareness trainings at the regional level. Nationally, the federation is promoting policy changes that would improve labor laws covering family leave for women and men, maternity leave and sexual harassment. The federation also is backing a proposed Domestic Violence Act that addresses gender-based violence.

Zimbabwe workers are struggling in an environment of large-scale job losses, hollow government budgets and regular violations of worker rights. Since January 1, roughly 70 companies have not reopened—affecting some 9,000 workers. Many workers lucky enough to have a job often work for months without pay, unable to walk away because of the lack of alternatives and fearful that they may not be able to return to work.

As the number of jobs in the formal economy declines, workers in the informal economy increase. The vast majority of people laboring in the informal economy are women, and ZCTU is developing strategies to mobilize and empower them. A series of studies and audits that ZCTU has commissioned since 2010 shows the extent to which women workers face economic marginalization and hurdles to full participation in unions. ZCTU notes, for example, that women hold only 21 percent of union leadership positions; most union affiliates do not have gender policies; and the overwhelming majority of union organizers and negotiators are men. Women workers recognize a disconnect between their priorities and those of union leadership.

ZCTU has developed and is promoting an internal gender policy and has created a social media strategy to open communication among women workers and union leaders. The federation actively participates in the ITUC-sponsored Decisions for Life Campaignaimed at empowering young women to make informed decisions about work, career and family, while also improving their ability to demand decent jobs and equal opportunities at work.ZCTU is seeking to expand Decisions for Life to include young men.

ZCTU also adopted a provision at its 2011 congress requiring equal representation for men and women in decision-making and in union training programs by 2016. While the goal is ambitious, Magaya is optimistic that the federation is making progress and sees an increase in women’s participation and parity.

“These programs don’t require many resources because women are saying ‘count us in,’” she said.

“We need to speak to their grievances and their needs.”