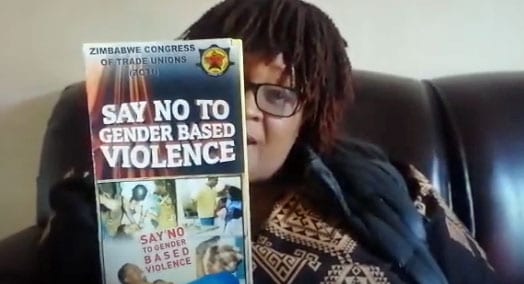 In June 2019, the International Labor Organization adopted Convention 190, along with Recommendation 206, the first global binding treaty to address gender-based violence and harassment (GBVH) in the world of work. The treaty calls on governments, employers and unions to work together to confront the root causes of GBVH, including multiple and intersecting forms of discrimination, gender stereotypes and unequal gender-based power relationships.

Women trade unionists and feminist activists campaigned for more than a decade to make this historic victory possible, led by the International Trade Union Confederation, the Solidarity Center and other labor allies. One year later, women from around the world who led the fight reflect on what has changed in the last year, discuss their current plans to ensure ratification and implementation of C190/R206, and envision the changes necessary to end GBVH in the world of work.

“We are commemorating the one-year of the passage of Convention 190, a vitally important convention that addressed one of the most pressing issues facing workers, violence and harassment in the world of work,” says Rosana Fernandes, at the Secretariat of the Committee to Combat Racism of CUT in Brazil. C190 “has translated into many victories—it has opened new areas of dialogue and negotiation for local unions with employers in their collective bargaining agreements, ranging from use of bathrooms to verbal abuse.” (See more videos with union activists on C190 here.)

Since C190’s adoption by governments, employers and worker representatives one year ago, unions have conducted extensive education and awareness training among members, a process that has mobilized members to confront GBVH at their workplaces through collective bargaining.

“The Nigerian Labor Congress has strategically mainstreamed Convention 190 into all programs, activities and events to popularize and continuously sensitize our members and all workers,” says Mercy Okezie, chairperson of the NLC Women Commission.

The NLC has undertaken actions, including “media campaigns, advocacy and engagement with the government,” says Rita Goyit, head of the NLC Women and Youth Department and Secretary of National Women Commission. “There is increased outcry against gender-based violence. People are also ready to speak out to condemn such actions.”

“We have seen changes in the way some unions have negotiated their collective bargaining agreements,” says Rose Omano, national chair at the Central Organization of Trade Unions in Kenya. The union is planning to push for negotiations with employers “so that we can have a modern collective bargaining agreement that talks about GBV at the workplace. It is also very important for us to educate women, educate men, educate young girls and boys on the effects of gender-based violence on the workplace.”

“We are working on an education campaign with print materials and social media information to empower the working class and our members to stand up against violence and harassment,” says Francisco Xavier Santana, director of Bahia Domestic Workers Union.

Cida Trajano, president of the CNTRV national garment workers federation in Brazil, says “we have worked to build the capacity of workers, women and men, to confront and prevent gender-based violence in the world of work, and included these demands in our negotiating platforms. We are organizing to hold employers accountable for their responsibility to prevent and eradicate GBVH.”

“When we address gender inequality and violence as union issues, it means we, as women, can set an agenda in our organizations, in our collective bargaining agreements and in our political advocacy,” says Cassia Bufelli, vice president of the UGT confederation in Brazil.

COVID-19 Highlights Connection Between Violence at Home and Work

Many sisters from Solidarity Center partner unions reflected on the impact of the COVID-19 pandemic, noting that it has left women in particular more vulnerable to GBVH, including the impact of domestic violence on the workplace.

“Gender-based violence has increased to the extent that in the first eleven days of the COVID-19 lockdown, we had 700 cases of gender-based violence, ” says Fiona Magaya, gender coordinator for the Zimbabwe Congress of Trade Unions (ZCTU).

C190/R206 explicitly recognized the profound impact of domestic violence in the workplace, and calls on governments and employers to address its impact on worker safety, dignity and health and its broader effects on the full and equal participation of women in the economy and society.

Women—the primary targets of domestic abuse—have struggled to protect themselves and their children, often while attempting to continue working or weathering recent unemployment in an unsafe home. For many women around the world, including child care workers, in-home healthcare workers, cleaners and other domestic workers, as well as many small enterprise handicrafters, a home already was their workplace.

“We need to ensure all our sisters and brothers and comrades can work free from violence,” says Andrea Morales Perez, secretary general of FETRADOMOV, a domestic worker union in Nicaragua. “This pandemic has left us even more vulnerable, and suffering even more rights violations—and highlights the importance of the work of domestic workers.”

“GBVH is so common that it has come to be seen as a normal part of our work or something that should not be questioned. Domestic workers are more exposed and vulnerable to violence at work than those in some other sectors for reasons including: asymmetrical power relationships, isolation, under-recognition of this occupation as work, and insufficient, ineffective legal protections,” says Maria Isidra Llanos, co-secretary general of SINACTRAHO Mexico.

“We face growing violence in the workplace in our society, especially in the context of the COVID crisis,” says Marcia Viana, secretary general of Sorocaba Garment Workers Union in Brazil. “In São Paulo, we are launching a campaign with all the unions in our state to combat violence against women, to create a moment to engage workers and employers to end violence in our workplaces and our society.”

Says Solidarity Center Equality and Inclusion Co-Director Robin Runge: “By raising broad awareness of the intricate connection between domestic violence and violence in the world of work, this unprecedented crisis offers a significant opportunity for the type of education and awareness-raising among among governments, employers and the broader public that can ensure the right to a violence-free workplace, one that is protected under international law.”

Unions Urge Ratification of C190 Around the World

Just as women trade unionists led the struggle to win C190/R206, they are now at the forefront of the struggle to ensure governments widely ratify and implement its framework. Uruguay recently became the the first country to officially ratify C190, with several others expected to do so in the coming months. Women trade unionists have been pushing governments around the world to ratify C190/R206.

“We urge our government to ratify, implement, and enforce Convention 190 on its one-year anniversary,” says Silma Perez, president of SINTRAHO in Honduras. “We are domestic workers and must defend our rights,” states Miriam Sanchez, also of SINTRAHO.

“Convention 190 is an important tool for us to be able to denounce abuses, the Brazilian government must ratify this convention,” says Luiza Batista, president of FENATRAD, Brazil. “The struggle continues.”

“This is especially important for us as women workers, who face constant harassment and violence, we need ratification in Paraguay, and we need real enforcement and implementation,” says Marcia Santander, Secretary General of SINTRADESPY in Paraguay.

“We as trade unions must do everything to ratify C190 and to eradicate violence at the work. Our workers deserve protection.”

“In C190, we find the mechanisms that will enable us prevent and and defend workers against violence and harassment. Up with women! Together we will win!” says Selfa Sandoval, SITRABI Izabal banana workers union in Guatemala. Sandoval is also coordinator for Gender Equality of the Latin American Coordinating Body of Banana and Agricultural Unions (COLSIBA).

“In El Salvador, we are fighting to ratify Convention 190, a tool that will help us eliminate violence and harassment in the world of work,” says Marta Zaldaña, secretary general of FEASIES federation in El Salvador. “YES to ratification of ILO C190!”

Through education, mobilization and advocacy on a global scale, workers and their unions are taking the lead in this transformative change.