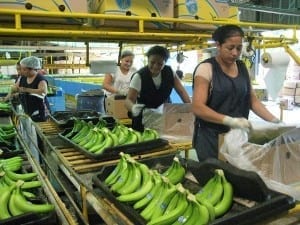 In Honduras, a country where women laboring in fruit packing plants and textile factories endure especially difficult conditions, two union leaders are empowering women to take on important roles in their unions and their communities.

Evangelina Argüeta Chinchilla also started work at a young age. At 15, she was hired at a maquila, where she toiled for nine years before being fired, likely for her work in the union. Now, Argûeta is coordinator of organizing maquila workers in the northern Choloma region for the General Workers Confederation (CGT), which includes seven unions that represent 10,200 maquila workers.

Speaking through a translator, both women described their painstaking efforts to develop awareness among working women and men about the rights of women on the job and in their unions. Munguia’s work began in the 1980s, when she was part of the local union, SITRATERCO. She and other women sought greater participation in the decision-making processes of their unions, but faced obstacles that included cultural norms dictating against women taking leadership roles. In the late 1980s, Munguía was selected by the International Labor Organization (ILO) as one of two women to take part in a training series on cultivating gender equality in the countryside. Those trainings took place every three months over two years.

She then began her decades-long work educating union members and empowering women, first through SITRATERCO and then COSIBAH. These “train-the-trainer” sessions reached an ever-larger group of workers. For instance, when Munguía held workshops for those on SITRATERCO’s women’s committee, participants returned to the plantations where they trained more women. Munguía and other women unionists have held countless trainings, many involving both women and men, in which gender equality issues are a subtext in education around literacy, media work or union governance. Munguía has gone on to help form a women’s coordinating committee in COLSIBA to reproduce across Central America what they have accomplished in Honduras. COLSIBA’s leadership practices what it teaches: Unions must elect at least one women for every COLSIBA committee.

Argüeta Chinchilla has taken a similar approach among women in the maquila industry. She and other women unionists hold leadership trainings with assistance from women’s rights organizations and the Solidarity Center. In one factory, for example, 43 women have participated in an entire education and leadership course, and Argüeta Chinchilla is now working with other unions to bring more women into the program. She hopes to see women “exercising power proportional to the numbers we represent in the world, in the labor movement.”

Honduran maquila unions have seen several successes in recent years, despite what activists say is increased government repression since a June 2009 presidential coup. In November 2009, Russell Athletic agreed to rehire 1,200 workers in Honduras who lost their jobs when the company closed the factory in an attempt to bust the union, after the union—with support from the Solidarity Center and the United Students Against Sweatshops—convinced 110 U.S. universities to cut their apparel contracts with Russell. And last year, Argüeta Chinchilla says workers formed two new unions in the apparel sector. At one garment factory, the new union signed its first collective bargaining agreement covering 1,200 workers.

Both women agree that the biggest challenge in developing women leaders is overcoming the machismo culture within unions. In Choloma, where five women are union leaders, Argüeta Chinchilla says they are reaping such success in their union education and outreach among maquila workers that even men have to admit they are doing good work. Munguia, who says men often see women’s leadership as an affront to them, says the key is to build consciousness among men by sowing seeds of support among a few men—“and of course, training women to stand up for themselves.”