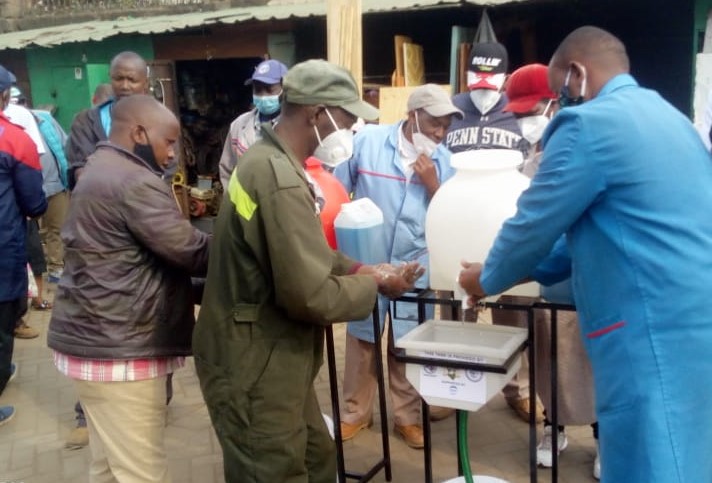 “Many people think that trade unions only represent formal workers, but now you know that informal workers are equally important and that’s why we are here,” said Rose Omamo, general secretary of the Amalgamated Union of Kenya Metal Workers (AUKMW), which helps represent automobile mechanics.

Given the prominence of market shopping in Kenyan citizen’s daily lives—96 percent of the country’s retail is informal—together with relatively high infection rates of market vendors, infection control at markets is essential for containment of the pandemic. Scientists surveying about 10,000 people in Mozambique last month found that market vendors had the highest rate of antibodies to SARS-CoV-2—the virus that causes COVID-19—followed by healthcare workers.

COTU-K and its affiliates are addressing the pandemic on several fronts, including advocating with the Kenyan government to ensure informal worker access to government-provided COVID-19 relief measures such as food support and cash transfers. Solidarity Center partners AUKMW, KUCFAW and KUDHEIHA together with the Kenya Long Distance Truck Drivers Union (KLDTDU) are advocating for measures to protect cashiers and other workers exposed to the public. COTU-K and its affiliates are conducting several pandemic relief drives, including food and PPE distribution to flower workers in Isinya, Kajiado County, with the Kenya Plantation and Agricultural Workers Union (KPAWU) on August 17.

The pandemic has thrown systematic inequality in the Kenyan workforce into stark relief.  As compared to the fewer than 3 million people who work in the formal sector, Kenya’s nearly 15 million informal sector workers—the majority of whom are women—historically have few legal protections. Most informal-sector workers, which include domestic workers and cleaners, market and street vendors, mechanics and security guards, are not covered by national safety and other employment regulations and have no access to government social programs such as social security, healthcare and unemployment benefits. Last year COTU-K affiliate trade unions representing Kenya’s formal-sector workers in food, health, education and metals signed memoranda of understanding (MOUs) with informal worker associations in their respective sectors in order to bring 5,600 newly organized informal-sector workers under the country’s legal framework that protects formal workers.