The number of countries that exclude workers from the right to form or join unions increased from 92 in 2018 to 107 in 2019, and 80 percent of countries deny some or all workers collective bargaining rights, according to the International Trade Union Confederation’s Global Rights Index 2019 released today.

“Democracy is in crisis, as governments continue to roll back workers fundamental rights,” ITUC General Secretary Burrow said at a press conference releasing the report today in Geneva. “But our solidarity and defense of workers is also unprecedented.” 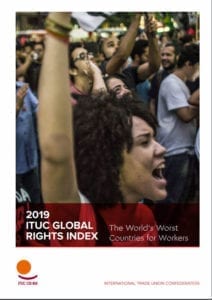 The report documents escalating repressive actions against workers worldwide as part of a global environment in which democracy is being increasingly restricted.

In addition, the report finds:

“The three global trends for workers’ rights identified in the 2019 Global Rights Index show that democracy is in crisis, governments are attempting to silence the age of anger through brutal repression, but legislative successes for workers’ rights are still being won,” the report states.

‘We Will Claim Our Rights!’

Speaking at the press conference, Bernice Coronacion, senior leader of the union federation SENTRO in the Philippines, choked up as she recounted the violent escalation against union members there, including the murder of a union leader.

“Trade union work very dangerous in the country,” she said. “We don’t just need good rights on paper for workers, we need them to be actualized. And we will claim these rights!”

The Philippines is among the 10 worst countries for workers’ rights in 2019, according to the report. The others are Algeria, Bangladesh, Brazil, Colombia, Guatemala, Kazakhstan, Saudi Arabia, Turkey and Zimbabwe.

Also speaking at the press conference, Vagner Freitas, president of the Central Union of Workers (CUT) in Brazil, said although the rights of women workers are being rolled back, “women have been at the forefront of the struggle against these anti-democratic actions against women workers and women in our country. We will restore democracy in Brazil.”

The ITUC Global Rights Index 2019 ranks 145 countries against 97 internationally recognized indicators to assess where workers’ rights are best protected in law and in practice. The ITUC has been collecting data on violations of workers’ rights to trade union membership and collective bargaining around the world for more than 30 years.