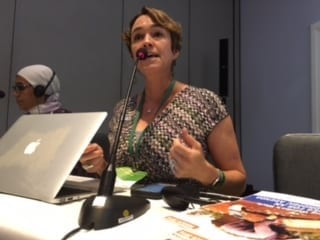 Globally, women are paid 30 percent less than men—but “imagine instead of corporations making 30 percent more off women’s labor, imagine if that 30 percent were coming back to our communities in the form of wages,” says Shawna Bader-Blau, Solidarity Center executive director.

Speaking on the panel, “Women’s Economic Empowerment and Workers Rights,” a Solidarity Center-sponsored session at the 2016 Association of Women’s Rights in Development (AWID) Forum, Bader-Blau said challenging such wide-reaching corporate power means “we need to partner across social movements.”

Cross-movement building is a goal and theme of the September 8–11 AWID Forum, where more than 1,800 participants from 120 countries are gathering to find strategies for mobilizing greater solidarity and collective power across diverse movements.

Union and worker association leaders from Brazil, Morocco and the United States taking part in the panel shared how unions are helping empower women to achieve economic justice.

Seventy million women around the world are in labor unions or worker associations, says Bader- Blau. “The labor movement is by definition the broadest movement for women on earth that is membership based.” 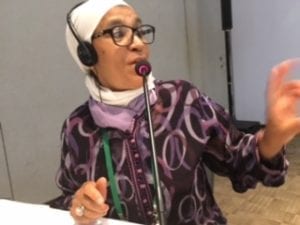 “In the frontlines of this battle we have women who are fighting for labor rights”—Saida Bentahar, CDT Morocco.

In Morocco, the Democratic Confederation of Labor (CDT) in Morocco is helping agricultural workers win bargaining rights with their employers. Most of the workers are women, who live in difficult, fragile conditions, says Saida Bentahar, a member of the CDT Secretariat.

“They sometimes cannot read or write, they live in extreme poverty, they are not paid good wages,” she said, speaking through a translator.

Together with the Solidarity Center, the CDT is training women on their workplace rights, including standing up against sexual harassment.

“Some women wouldn’t even speak at first when we would hold sessions but now they really stand up for what they believe,” says Bentahar. “Together they have written a declaration to guarantee stable labor rights. They will now have equal pay, certificates to assure their skills and capacities. They will have equal opportunities for work and training as well.”

Junéia Batista, national secretary of the Confederation of Workers Union (CUT) in Brazil, described how women in the confederation have worked to be part of contract negotiations to ensure issues like day care are included, and to achieve leadership since the confederation formed in 1983.

“We want more,” says Batista, speaking through a translator. “It has been 33 years with men, men, men presiding in the presidency,” she says, and women members are working to establish gender equality measures throughout their union structures.

In Mississippi, a state in the southern United States, the Mississippi Worker’s Center for Human Rights (MWCHR) is helping empower working people in Oxford, an impoverished area with a history of racial violence.

“Wages are not the only point of resistance and struggle we need to be dealing with,” says Jaribu Hill, MWCHR executive director.

Panelists also discussed the increasing attacks throughout the world on workers’ ability to form unions.

“Our broader labor movement is suffering from a closing of democratic space,” says Bader-Blau, citing a 30 percent rise in attacks on worker rights around the world. “Our governments, aided by corporate power, are defining worker rights in narrower and narrower terms.”

“In this environment, in this context, we feel it is so important that women’s work be respected and valued … and dignified and that we fight for this,” she says. “The primarily vehicle for fighting for women’s rights at work is trade unionism.”

As Bentahar says, “In the frontlines of this battle we have women who are fighting for labor rights.”