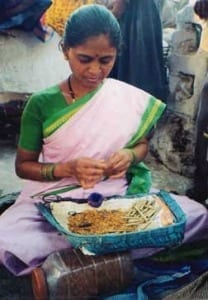 Self-employed bidi rollers in India have access to social services because of SEWA’s efforts. Credit: SEWA

India passed a landmark Street Vendors Act this month that, for the first time,recognizes the country’s 40 million street vendors as workers deserving of rights and labor law coverage equal to all other wage earners.

Behind the passage of the Protection of Livelihood and Regulation of Street Vending Act are decades of struggle by a dedicated group of women who in 1972 began organizing women workers in informal economy jobs like home-based cigarette (bidi) rollers. Today, the Self Employed Women’s Association (SEWA) includes 1.7 million women workers across the country, 200,000 of whom are street vendors.

“This is a proud moment for us at SEWA as we have struggled hard to improve the situation of street vendors, many of them women who were earlier denied the right to a respectful livelihood and subjected to severe exploitation,” says SEWA National Secretary Manali Shah.

SEWA members and allies waged a hunger strike in New Delhi and took other action to press lawmakers in India’s upper house of Parliament to pass the bill, which the lower house approved last year. Their actions exemplify the type of public education and outreach members have undertaken to make visible workers who are not accorded the same rights and protections as those employed in formal sector jobs.

SEWA members are among the most marginalized of India’s workers: Self-employed, their income is unpredictable and few receive social welfare benefits, unlike workers in formal-economy jobs. More than 94 percent of women workers in India work in the informal-sector economy.

The union began when five women went door to door to learn the most pressing issues for self- employed women, said Geeta Koshti, a coordinator in SEWA’s legal department. The early SEWAorganizers then identified women who could take leadership roles, and they recruited local organizers who, as trusted members of their communities, could better connect with women workers.

Women who join with SEWA go on to form their own local trade union councils where they make decisions about the types of campaigns they want to pursue and hold trainings on membership education and leadership development. Some have created worker cooperatives and other organizations to assist their members.

SEWA is very much a member-driven organization, said Koshti, and the union prioritizes its efforts in accordance with its members. For instance, if workers say they want clean water, the union does not run other unrelated campaigns.

From a handful of women in Ahmedabad, Gujarat, SEWA has expanded to represent women in 14 Indian states. One of SEWA’s most successful endeavors involves women in the bidi trade. Koshti, whosemother was a bidi roller and SEWA member, said SEWA’s multiyear efforts culminated in a Bidi Welfare Board, one of the few such institutions for workers in the informal sector. The board is responsible for implementing a benefits program that allows bidi workers to have access to social services, such as healthcare and educational scholarships for children.

SEWA, which its leaders describe as both an organization and a movement, includes programs such as a shareholder organization to assist artisans in marketing their crafts and a microcredit bank.

Koshti adds that SEWA’s integrated, holistic approach addresses all the issues women face, such as child care. In short, the union is driven by a real strong commitment to ensure members are involved.