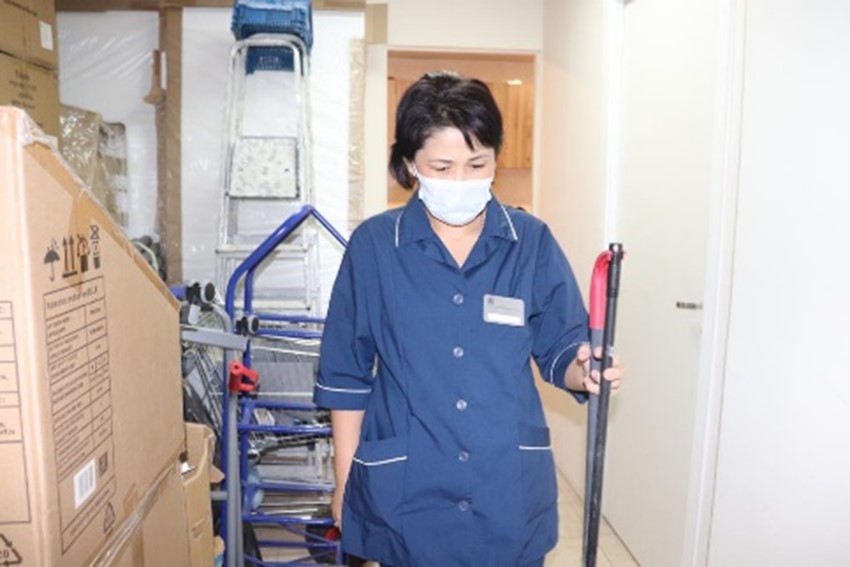 Almost 400,000 Kyrgyz women like Azizbaeva Gulkair are estimated to have migrated to Russia to earn their livelihoods. There, those who are providing domestic services are often subjected to abuse—including rape, sexual harassment, confinement to the employer’s home and wage theft—documents a study by Kyrgyz migrant worker foundation Insan-Leilek and the Trade Union of Migrants of the Kyrgyz Republic. Credit: Insan-Leilek

A study conducted by Insan-Leilek, a Kyrgyz migrant worker foundation, and the Trade Union of Migrants of the Kyrgyz Republic documents abuses suffered by many who migrate to Russia to earn their livelihoods as nannies, adult caregivers, cooks, cleaners and live-in domestic workers. An estimated 750,000 Kyrgyz people have migrated to Russia for work; official Kyrgyz government data estimates that half that number are women.

“We are invisible people,” says 34-year-old survey respondent and domestic worker Almagul. (Her last name is withheld to protect her livelihood and personal safety.)

“The Problems of Informal Domestic Workers,” reflects the experiences of  300 Kyrgyz migrant domestic workers, from whom 24 were selected for in-depth interviews by two migrant worker experts. Respondents’ jobs were in the Russian cities of Kazan, Moscow, Novosibirsk, Samara and Yekaterinburg.

The study reveals a wide range of employment abuses among the mostly female domestic workers who were surveyed, including sexual harassment and violence, other forms of physical and emotional abuse, unpaid hours, excessive workloads, denial of time off and wage theft.

More than 80 percent of the female survey participants who provided in-depth interviews reported sexual harassment at the hands of their employers. Of this group, almost 4 percent had experienced severe sexual violence, including rape, while 25 percent were subjected to indecent touching that included unwanted touching of intimate body parts. More than 30 percent of those reporting sexual harassment and violence said they could not ask anyone for help or support and, of this number, 7 percent attempted suicide. More than 70 percent of those providing in-depth interviews said they were often beaten, allegedly for laziness, and that they can rarely go out.

Two survey participants reported having become surrogate mothers for their employers without a written agreement or fair compensation.

Almost 90 percent of the larger group surveyed (300 respondents) were working without a formal contract because they had secured their jobs through personal connections. Such workers are vulnerable to unregulated work in which hours, pay, duties and conditions are determined at the whim of the employer, some of whom are unscrupulous and exploitive.

“I worked 24 hours a day, and I looked after the children, cooked, did the laundry. Weekends were out of the question,” reports Miraida about a job she held in Russia when she was 18.

Kyrgyz domestic workers in Russia provide an average of 10 hours of work per day, a survey of the larger group of 300 found. Of these, those who live in an employers’ home are working an average of more than 12 hours per day. More than 40 percent said they perform additional services that were not agreed with the employer at the time of hiring, without adjusted compensation.

Respondents were recruited for the survey through Trade Union of Migrants of the Kyrgyz Republic WhatsApp groups and Insan-Leilek diaspora organizations and migrant communities. In-depth interviews were conducted online and over the phone.

Russia is the main destination for approximately 750,000 of Kyrgyzstan’s labor migrants. Official data on the percentage of migrant women employed in domestic work in Russia does not exist.

Insan-Leilek foundation and the Trade Union of Migrants of the Kyrgyz Republic are actively engaged in anti-trafficking programs in Kyrgyzstan, with Solidarity Center support, including last year’s “100 Days Against Trafficking in Persons” youth campaign.