‘We Are Here to Denounce All Forms of Child Slavery’ 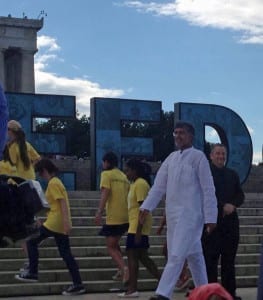 Saying that “168 million children are producing wealth, producing clothes, producing shoes, the things that you and I use,” child rights advocate Kailash Satyarthi told a crowd gathered yesterday at the Lincoln Memorial in Washington, D.C.: “We are here to say that we denounce all forms of child slavery, of human slavery.”

On the 157th anniversary of Abraham Lincoln’s “House Divided” speech on slavery, Satyarthi, winner of the 2014 Nobel Peace Prize, spoke of the urgency with which child slavery must be eradicated. The Kailash Satyarthi Children’s Foundation organized the meet-up for childhood freedom June 16, days after the global community marked World Day Against Child Labor.

Many of the 168 million child workers around the world are forced into slavery or prostitution or serve as child soldiers. Most, Satyarthi said, work in hazardous and even life-threatening conditions. While this number is down from 246 million in the 1990s, Satyarthi said there is still a long way to go.

Satyarthi recalled the visions of freedom activists who came before him, including not only Abraham Lincoln but also Martin Luther King, Jr., Mahatma Gandhi and Nelson Mandela. “I feel pain,” Satyarthi said. “I am angry that we have not been able to pay the real tribute to these men by eradicating slavery.”

He also insisted that child labor and poverty could not be vanquished without serious investment in education. He lamented poorly financed school systems in some developing countries, where funds for education amount to less than three percent of gross domestic product. Children’s education also receives less than one percent of humanitarian aid worldwide, Satyarthi reported.

“We cannot have a just, dignified world without education,” he declared. “My children in the world cannot wait. Freedom must happen now.”