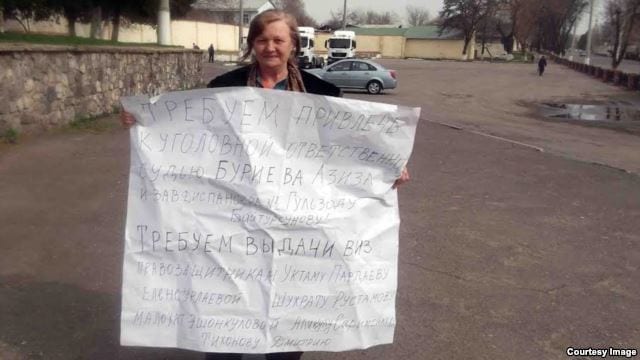 An Uzbek human rights monitor says she was arrested and assaulted as she sought to document the Uzbek government’s forced mobilization of teachers and doctors to clear weeds from cotton fields outside Tashkent, the capital.

Elena Urlaeva, 58, head of the Uzbek Human Rights Defenders’ Alliance, said in an email that she was detained May 31 in the town of Chinaz, after interviewing and photographing teachers forced by government officials to work in cotton fields.

According to Urlaeva, police injected her with unknown sedatives and interrogated her for 18 hours. During the interrogation, the police struck her in the head. While the police held her, doctors probed Ms. Urlaeva in the vagina and anus until she bled, and took X-rays, after accusing her of hiding a data chip. She was denied access to a toilet, ordered to relieve herself outside and photographed nude. The police threatened more physical violence and confiscated her camera, notebook and information sheet of International Labor Organization conventions.

“I have never experienced such humiliation in my life, Urlaeva said. “The police were laughing and enjoying humiliating me.”

Urlaeva also photographed 60 physicians pressed into work in the cotton fields by city hall officials. Kindergarten teachers told her that the mayor had ordered the schools to send them to weed the fields.

Uzbekistan operates what is perhaps the world’s largest state-organized system of forced labor, forcibly mobilizing more than a million of the country’s citizens to pick cotton each fall, as documented by the Uzbek-German Forum for Human Rights and the Cotton Campaign.

The Cotton Campaign, a global coalition of labor, human rights, investor and business organizations that includes the Solidarity Center, says “the violent response by the Chinaz police reflects an essential element of the government’s forced labor system: the use of coercion—imprisonment, assault, harassment and intimidation of citizens reporting human rights concerns.”

Steve Swerdlow, a Bishkek-based Central Asia researcher for Human Rights Watch, says Urlaeva’s detention on May 31 and alleged abuse while in police captivity represents “a new low by the Uzbek government” and an effort to “brutalize the country’s civil society.”

The Cotton Campaign is demanding the government of Uzbekistan conduct a transparent investigation of Uraleva’s assault, bring to justice the public officials responsible and issue a public commitment to allow independent human rights organizations, activists and journalists to investigate and report on conditions in the cotton production sector without facing retaliation.

At least 17 people died due to unsafe working conditions during last fall’s harvest, in which teachers, medical professionals and students were forced to pick cotton without any time off and with little or no protective gear, such as gloves. Children often had no classes during these weeks because teachers were working in the fields. Clinics and hospitals had few or no medical personnel.

The most recent U.S. Department of Labor’s annual “Findings on the Worst Forms of Child Labor” placed Uzbekistan among 12 other countries at the bottom of the report’s rankings and one of three, along with the Democratic Republic of Congo and Eritrea, that received the assessment as a result of government complicity in forced child labor. Uzbekistan is also among  23 countries that received the U.S. State Department’s lowest ranking regarding forced labor and human trafficking in 2014.