Union Win: No Layoffs in Tunisia Private-Sector in COVID-19 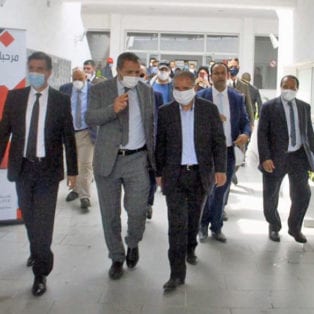 Some 1.5 million workers across Tunisia’s private sector will not lose their jobs and will be paid during COVID-19-related closures, following a landmark agreement between the Tunisian General Labor Union (UGTT), the Tunisian Confederation of Industry, Trade and Handicrafts (UTICA) and the government. Under the agreement, reached April 14, the government will contribute $70 per worker, with the remaining salary paid by employers. The pact covers workers in agricultural and maritime fishing; construction; metal, garment and shoe manufacturing; transportation; hotels and more.

UGTT Secretary-General Noureddine El-Taboubi commended UTICA, an employer organization, on its commitment to pay their full salaries to private-sector workers after the government’s one-time payment toward each worker’s salary. The agreement, backed by a government decree, results: For instance, 550 workers at the Kaschke Components Tunisie manufacturing firm were returned to the payroll.

“Solidarity must be demonstrated during times of genuine crisis like the current crisis facing Tunisia,” Taboubi says, noting that private-sector workers do not have have access to extensive social protection.

Union Members Across Tunisia Reach Out to Hard Hit Workers

The UGTT, which represents 1 million members across the country, took action early on in the novel coronavirus crisis to assist workers. The confederation pledged to donate $35,000 to a special fund to combat the virus and called on workers to donate a day’s pay. It also joined with the Housing Bank and Ministry of Health to retrofit a social housing building into quarantine facilities for healthcare workers who test positive for COVID-19 to ensure that they receive proper medical care.

Across Tunisia, union members have collected in-kind donations and held fundraisers to help equip hospitals with essential protective gear and medical equipment, and with their unions and the UGTT, donated tens of thousands of dollars to local hospitals, especially to those in regions with few resources such as Jandouba regional hospitals and Sidi Bouzid regional hospital.

UGTT and its unions also are working to ensure workers know their rights during the crisis and are demanding safe and healthy working conditions for those who must remain on the job, pushing for employers to provide masks, gloves and other protective gear.