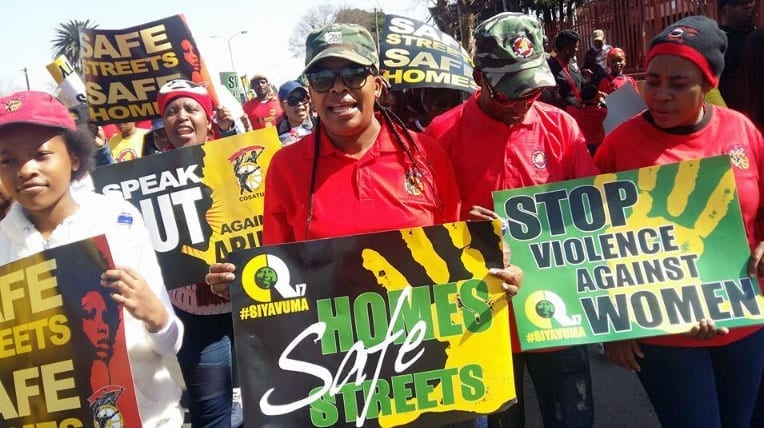 Energized after long days of intense discussions during the International Labor Organization (ILO) conference in Geneva, the women are now working nonstop at the local and regional levels to educate union members about the draft convention and campaign to push their governments to ratify it after passage.

“All sectors—including clothing and textiles, food and service, transport—are involved in the campaign to end gender-based violence at work,” says Mtsweni, gender coordinator for the Congress of South African Trade Unions (COSATU). Mtsweni is spearheading 16 days of action beginning November 25 in which workers from 16 sectors represented by the federation develop messages highlighting aspects of gender-based violence at work. November 25 is International Day for the Elimination of Violence against Women.

COSATU was among unions joining the thousands of women and their allies who marched across South Africa August 1 to protest gender-based violence as part of the #TotalShutdown campaign. As a result, South Africa President Cyril Ramaphosa acknowledged that “South Africa has failed its women and their constitutional rights” and announced a national summit to address violence against children and women.

Moving Governments to Ratify the Convention 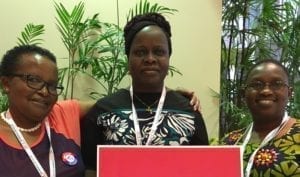 “Government should stand firm to say “No” to violence and harassment in the world of work”—Rose Omamo Credit: Solidarity Center/Tula Connell

In Kenya, Omamo is traveling around the country to educate engineers and workers in glass, metal and petroleum about the draft convention. Omamo is general secretary of the 11,000-member Amalgamated Union of Kenya Metal Workers, national chair of the Congress of Trade Unions–Kenya (COTU-K) Women’s Committee, and COTU-K executive board member.

She says workers are especially pleased that the draft convention, “Ending Violence and Harassment in the World of Work,” covers many groups, including women, men and young workers.

“Because violence in the workplace is rampant, they are saying this will help us have a firm stand to push government against violence at workplace, at home and in society.”

Omamo and Mtsweni also are working with the gender commission of the Organization of African Trade Union Unity (OATUU) to develop an effective  message to urge their governments to ratify the convention after it is passed by the United Nations. Countries are not covered by a UN convention unless their governments ratify it and indicate they are committed to applying its provisions in national law and practice, and reporting on its application at regular intervals.

“One strong message we are putting across is that the government should stand firm to say “No” to violence and harassment in the world of work, and workers must be protected wherever they are,” says Omamo. The dozens of OATUU union affiliates are based in countries such as Angola, Burkina Faso, Ghana, Guinea, Rwanda, Tanzania and Togo, in addition to Kenya and South Africa.

Unions’ Campaign for Convention on Gender-Based Violence at Work

The Solidarity Center produced a video as part of its campaign for passage of a gender-based violence at work convention.

Momentum for an ILO convention covering gender-based violence at work follows years of advocacy by the global union movement, an effort led by the International Trade Union Confederation (ITUC).

Leading up to the most recent negotiations, Solidarity Center partners urged their unions, governments and employers to publicly support a binding ILO convention on violence and harassment at work that includes gender-based violence.

“The workers were very strong in negotiations, very specific on what they want,” says Omamo. “They took a very firm stand on the areas they felt that were good for workers.”

Elsewhere, union members from Ghana, Liberia, Sierra Leone and Turkey joined their sisters from across Nigeria in a weeklong training on the ILO draft convention, sponsored by the National Women Commission’s of the Nigerian Labor Congress (NLC).

And in Honduras, Solidarity Center staff organized a meeting of representatives from unions, government and business to garner support for a global standard inclusive of gender-based violence and to advocate for a law on sexual harassment at work.

The ILO in recent days released an updated version of the draft convention that reflects the discussions this spring, and will hold follow-up meetings throughout the fall. The organization will issue a second questionnaire for unions, governments and business to solicit further input on the convention (the results of the first questionnaire were incorporated in a draft last spring), and final discussion will take place at the next full ILO conference next May.