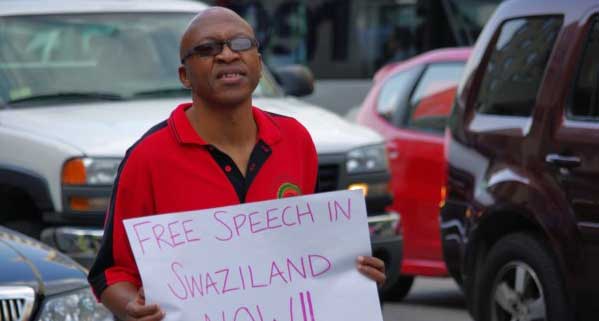 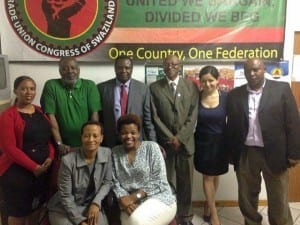 An international delegation of union leaders traveling in Swaziland is calling on the government to guarantee the rights of workers to freely form unions and exercise freedom of speech and assembly, and says repressive legislation used by police against union activities still has not been addressed by Parliament, even as the government continues to imprison human rights activists for exercising their right to freedom of speech.

Led by Wellington Chibebe, International Trade Union Confederation (ITUC) deputy general secretary, the fact-finding group is looking into the ongoing government repression directed at Swazi union leaders and human rights proponents, and plans to issue a report to the ITUC and to several members of the European Parliament by the end of May.

Just days before the delegation arrived on May 14, the Swaziland government announced it had registered the Trade Union Congress of Swaziland (TUCOSWA), an action it has refused to take for the past three years.

But delegation members say they are not celebrating the action because the government “did not do more than it was supposed to do,” says Jos Williams, president of the AFL-CIO Metropolitan Washington Labor Council, speaking from Swaziland. “We do not see that as a victory of any kind.” Williams is among a six-member delegation that includes a representative from the Congress of South Africa Trade Unions (COSATU).

In fact, two days after the government announced TUCOSWA’s official registration, police massed outside a meeting of TUCOSWA affiliates in a show of force, according to TUCOSWA Secretary-General Vincent Ncongwane.

“All that has been told (by the government) to the world is just playing to the public gallery,” Ncongwane says, while the reality of repression in a monarchical government that outlaws political parties continues. Twice this year, police have broken up TUCOSWA union meetings, injuring a union leader in the process. On May Day, brave union members held rallies despite a government ban on public gatherings.

The ITUC is demanding the government repeal anti-terrorism laws that enable it to imprison union leaders and others who call for democracy; provide full recognition of union activities in accordance with international laws; and support freedom of speech, assembly and association.

“The government must meet the demands the ITUC delegation has made if the ITUC is to give a favorable report by the end of the month,” Williams says. “From my standpoint, the actions of the government have not been very encouraging. Yes, they have recognized the union, but regarding the other demands we made, there has been no response.”

Delegation members also sought to visit political prisoners, some of whom have been held for two years. So far, says Williams, they “have gotten the run-around” in efforts “to see our comrades in jail and look at the conditions.” (You can sign a LaborStart petition demanding their release. If you Tweet, use the hashtag #SwaziJustice.)

In June 2014, the U.S. government took the rare step of suspending African Growth and Opportunity Act (AGOA) trade benefits for Swaziland, citing the Swazi government’s systematic violations of fundamental worker rights, including refusal to legally recognize TUCOSWA. In addition, the 2014 U.S. State Department human rights report cited serious human rights violations in Swaziland, including arbitrary or unlawful killings by the government or its agents and severely restricted freedom of assembly, including violence against protestors.

Given the level of harassment and repression, Williams says he “came here seeking to encourage” union leaders, but instead found that “they are standing tall in the face of adversity.

“It is rewarding to me as a trade unionist to have drawn strength from these individuals.”