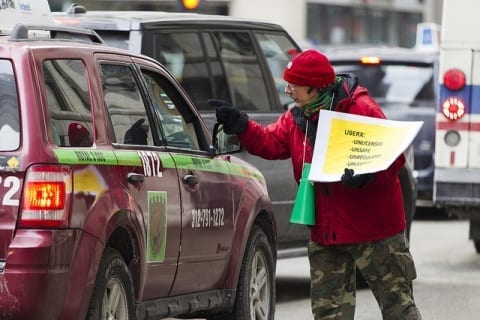 Uber had said it would create 1 million jobs for women, a benchmark unions say is meaningless unless those jobs are stable, safe and provide wages sufficient to support families.

“There was an immediate rejection by unions and NGOs (nongovernmental organizations) of this idea of a million jobs that we knew were likely to be insecure, ill paid and potentially unsafe,” says Brigitta Paas, International Transport Workers’ Federation (ITF) vice president.

The decision to partner with Uber, announced during the opening days of the Commission on the Status of Women (CSW) meeting last week, outraged CSW participants, who organized a global union statement and public protest.

“Uber economics is the most aggressive informalization of an industry which was already deregulated three decades ago,” the global union Public Services International (PSI) said last week. “Indeed, it represents exactly what the women’s movement has been fighting for decades.”

In many cities and countries, taxi drivers are union members with good wages and benefits, the opposite of the Uber model. By classifying drivers as “independent contractors,” Uber denies them basic protections, from minimum wage pay to health care and other benefits on the job. PSI cited Uber research that “revealed drivers’ average annual earnings of $15,000 and a proliferation of part-time work.”

“Unions rose up at the CSW, analyzed why the partnership was harmful to women and showed how unions and the economic empowerment they fight for, are key to gender equality,” says Lisa McGowan, Solidarity Center senior specialist for gender equality. “Decent wages, social benefits, stable employment—all are fundamental to achieving gender equality.”