Last week the United Nations passed its next set of commitments for development, the “Sustainable Development Goals,” for the coming 15 years and added important labor issues that its member states are obligated to prioritize. “This is significant,” said child labor crusader and Nobel Prize Laureate Kailash Satyarthi at the UN Summit, “because for the first time these goals include the issues of child slavery, labor and trafficking, and has brought forth the language to address them.”

Satyarthi, a longtime friend and partner of the Solidarity Center, was one of the featured speakers at a UN Interactive Dialogue, in which dozens of heads of state and UN agencies discussed the new goals. While some governments and international agencies talked up free trade as the key to addressing economic equity and growing inequality, Satyarthi—along with governments such as Sweden, Ghana and the Dominican Republic—stressed a rights-based approach to development and putting workers and their rights first. 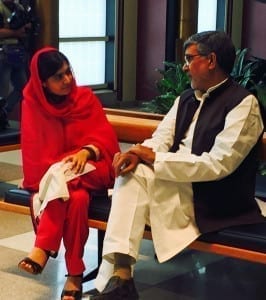 “A sustainable economy and society can never be built on the foundation of slavery,” he said. “This is a new opportunity for civil society, faith organizations, governments and businesses to build genuine and innovative partnerships to make child slavery history.” Satyarthi also pointed out that the private sector “must shoulder its responsibility for the world’s children” and said that “truly visionary corporate leaders must safeguard children throughout their supply and value chain.”

Guy Ryder, secretary general of the International Labor Organization (ILO), echoed Satyarthi, saying that Goal 8—the creation of decent work—“is a key to the success of all other agendas, which depend on Goal 8.” While the incidence of child labor has dropped by about a third worldwide over the past 15 years, Ryder also called on the UN to not to spare any effort until the world is free of child and forced labor.

The inclusion of commitments to address child labor, slavery and human trafficking was the result of a multiyear lobbying and advocacy effort by the Global March Against Child Labor, Satyarthi’s organization, formed in 1997 to press for ILO Convention 182 against the worst forms of child labor. The convention has since been ratified by most countries around the world. Now the Global March and its allies have succeeded in centering the goal in the global development agenda, and advocates of justice and equity can hold governments accountable for making decent work for adults and ending child slavery the cornerstone for sustainable economic development.