UN Convention on Economic Rights a Powerful Tool for Workers 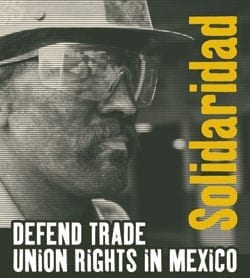 Worker rights advocates have lots of tools available to them to help foster safe and healthy workplaces, family-supporting wages and social protections. One item in the toolbox is rule of law—and a recent Solidarity Center analysis of Mexican laws and policies through the lens of a key international standard offers an example of how to utilize legal instruments to make positive change.

The Solidarity Center examined Mexico’s Constitution, federal law, public policies and common law (court rulings) and compared them with the obligations the country agreed to in 1981 when it ratified the International Covenant on Economic, Social and Cultural Rights (ICESCR).

Adopted by the United Nations in 1966 and in force since 1976, the ICESCR is a binding document signed by nearly all (162) countries. The IESCR covers issues such as forced labor, child labor, gender, migration and obligations to combat and reduce unemployment. It also includes extensive rights around freedom of association and the right to strike. The Solidarity Center compared three ICESCR articles with Mexico’s laws and conducted interviews and research to determine the extent of the country’s compliance. (The report will be out this summer—watch the Solidarity Center website for its release.)

• Mexico’s 2012 labor law reform, in line with its ICESCR obligation to put in place a national employment plan and reduce the number of workers forced to make a living in the informal economy, has not fulfilled its goal of increasing jobs in the formal economy nor reducing informal-sector employment and overall employment.

• Mexico’s labor law includes provisions to improve job safety and health, in accordance with the ICESCR, but many problems remain. For instance, new mining regulations cover coal but not other forms of mining, and attempt to regulate, but do not outlaw, artisanal mining, where many fatalities occur. The Labor Ministry, with one of the smallest shares of the federal budget, has limited resources for workplace inspections and even for the proper training of inspectors.

Such an analysis provides a concrete springboard from which unions and other worker advocates can pursue worker rights. Countries that ratify the ICESCR are obliged to report on the extent of their compliance, which includes enforcement, not merely implementation, of their ICESCR obligations. As a binding document, the ICESCR provides worker advocates a legal tool for pursuing fundamental socioeconomic rights based in international human rights norms.

Last year, the ICESCR Optional Protocol went into effect, giving individuals in countries that ratify the protocol the ability to seek justice for violations of their economic, social and cultural rights. Fourteen countries have ratified the optional protocol, including El Salvador, Gabon, Mongolia and Uruguay. The Optional Protocol can provide a key mechanism for improving worker rights, and unions and other civil society groups are well placed to advocate for its passage.

As part of the UN’s Bill of Human Rights, the ICESCR points to economic rights as essential to the fulfillment of human potential. As former South African President Nelson Mandela stated: “There is at times a tendency to view civil liberties as distinct from socioeconomic rights….There can be no more forceful refutation of that false distinction than the manner in which President Roosevelt formulated the generic freedoms of democracy