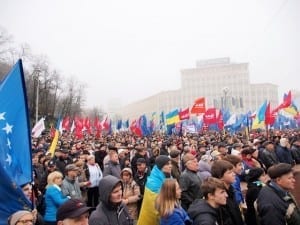 Civil society groups such as independent trade unions support association with the EU but oppose the IMF’s austerity demands.

As protests have spread across Ukraine in recent days over the government’s decision to suspend Association Agreement talks with the European Union, more than 100,000 Ukrainians took to the streets in Kiev on Sunday, marching in the cold rain as part of a coalition of political parties and civil society groups, including the Confederation of Free Trade Unions of Ukraine (KVPU).

After negotiations with the European Union, and a parallel effort by Ukraine to secure loans from the International Monetary Fund (IMF) broke down, the Ukrainian government blamed the collapse of the agreement on the IMF’s push for severe austerity measures. Announcing the end of the negotiations, Ukrainian Prime Minister Mykola Azarov called the IMF’s austerity demands the “last straw.” IMF requirements listed by Ukraine include a wage freeze for public employees and large increases in home utility costs.

KVPU members unanimously adopted a resolution at their November congress calling for the government to sign the EU agreement, but also expressed dismay at the IMF’s austerity demands. KVPU President Mikhailo Volynets said, “We strongly believe that closer ties to the EU will benefit our members. Unfortunately, the IMF demanded economic reforms that would hurt average families in Ukraine, and undercut worker and human rights.

“The problem in Ukraine is not that a teacher or nurse makes 3000 UAH ($365 USD) a month,” Volynets said. “The problem is that a few oligarchs control everything for their own profit and that teachers and nurses only make 3000 UAH a month.”

Volynets urged Ukrainians to keep up the pressure on the government, and also asked for international solidarity.

“The KVPU calls on our European Union friends and the IMF to clearly articulate economic reform proposals that support the average Ukrainian family. We call on the government to sign the Association Agreement without delay. Economic reforms must address the vast income inequality and corruption at the top, and not target average working Ukrainians. Does the IMF want to send the message that austerity at the expense of average Ukrainians was more important, at the end of the day, than democracy?”

Get updates on the ongoing pro-EU integration protests at the English language news site, www.kyivpost.com, and in Ukrainian at the protest organizers Facebook page, www.facebook.com/EuroMaydan.

Follow the action on Twitter with the hashtag, #euromaidan, named after Maidan Nezalezhnosti (Independence Square) in central Kiev.