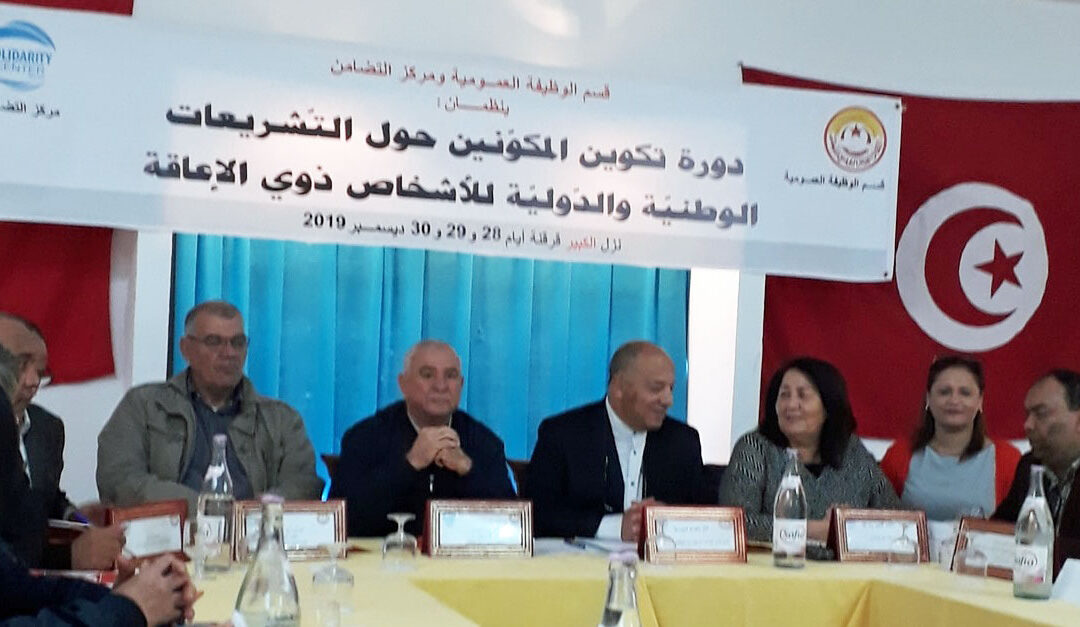 The Solidarity Center and its partners held training sessions throughout Tunisia as part of a multi-year campaign for passage of national law broadening rights for workers with disabilities. Credit: Solidarity Center

When the Tunisian Parliament this summer approved a law increasing the percentage of people with disabilities in civil service, union activists and their allies in the disability rights and human rights movements took a moment to celebrate the victory—and to reflect on the five-year advocacy campaign it took to achieve this goal.

“By paying attention to the issues of people with disabilities, working on more information and support for them, and considering their rights an integral part of the human rights system, people with disabilities are able to make valuable contributions to their communities if opportunities are available to them,” the Tunisian General Labor Union (UGTT) said in a statement.

The new law stipulates that no fewer than 5 percent of annual public service assignments for workers with a college degree who have been unemployed for 10 years are allocated to differently abled workers.

A broad-based partnership with key disability rights activists fueled the campaign’s success. With Solidarity Center support, a 10-member leadership committee of differently abled workers from the UGTT and the Arab Forum for Persons with Disabilities, and a prominent civil society activist steered the project. The committee, half of whom were women, conducted train-the-trainer sessions with union leaders and representatives of organizations focused on the economic and social integration of workers with disabilities who, in turn, held similar trainings across the country.

“The rights of persons with disabilities are an integral part of the human rights system,” says Moanem Amira, assistant secretary general in charge of civil service unions, and coalition partner. Universal Human Rights frameworks, such as the United Nations’ Convention on the Rights of Persons with Disabilities, establish the right of those with disabilities to decent work without discrimination or exclusion.

Building on internationally guaranteed rights, the coalition strategized with workshop participants around the country on crafting campaigns for passage of national legislation. The coalition organized awareness days, including those that focused on the role of unions in reaching workers with disabilities, and mobilized them to achieve their economic and social rights. Workers and rights activists went on to champion the socio-professional inclusion of individuals with disabilities in the workplace and connect with government representatives to monitor and follow up on violations against workers with disabilities.

Dozens of workers with disabilities joined unions throughout the campaign through the outreach of activists such as Nabil Moumni. From his home in Gabes, in southeastern Tunisia, Moumni interviewed workers with disabilities in the public and private sectors to better understand their working conditions, held trainings and shared with workers the benefits of forming unions to achieve their rights.

A disability rights activist since 2012, Moumni says his involvement in the project and the hard work of those involved inspired him “to be a more enthusiastic as an activist.

“Everyone who took part in this project did their very best to reach important outcomes, because now awareness of human rights among trade unionists has reached a stage of maturity that makes the UGTT a locomotive for advocating social issues in Tunisia,” he says.

One billion people, or 15 percent of the world’s population, experience some form of disability, with 80 percent to 90 percent of working age people with disabilities unemployed in developing countries.

Persons with disabilities are more likely to experience adverse socioeconomic outcomes than persons without disabilities, such as under education, a higher drop-out rate, lower levels of professional integration and higher poverty levels.

Early on in the campaign, the coalition conducted a first-of-its-kind survey to examine how workers with disabilities and unions can address discrimination and lack of accessibility for workers in Tunisia. The survey surfaced the immense obstacles workers with disabilities face in finding good jobs. In particular, women with disabilities are challenged by the double burden of sexism and ableism. Sexual harassment, violence and other forms of abuse mean job opportunities can be both scarce and exploitative.

So even while celebrating passage of the new law, coalition members say they are planning to continue working to ensure workers with disabilities can exercise their rights—and already are organizing awareness-raising and advocacy campaigns and building a regional network to support workers with disabilities who can take part in improving their rights at work and in their communities.