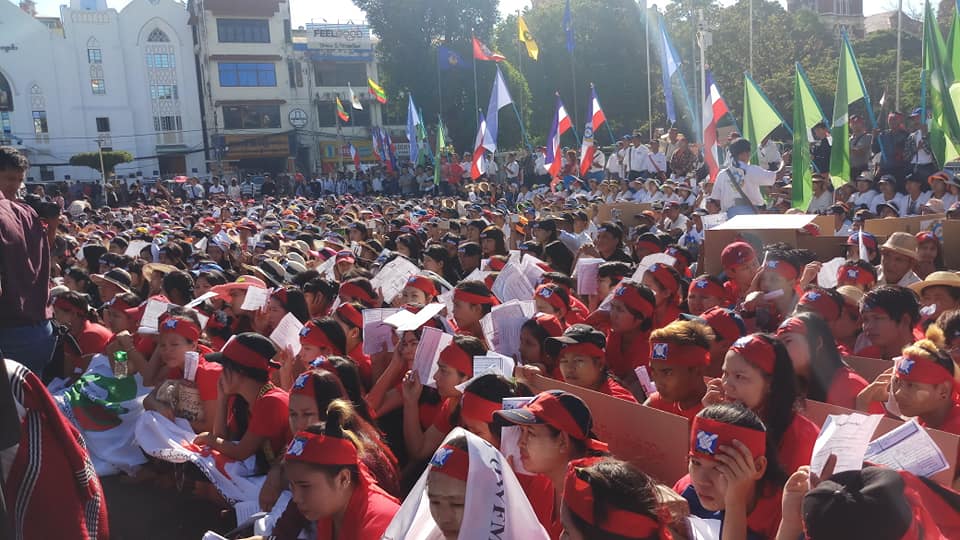 “Respect our right to unionize!” shouted a march leader. “We want it! We want it!” thronged the response from protesters, most of whom toil between 10 and 12 hours a day, six days a week in the industrial zones surrounding Yangon. They are paid a minimum wage of $3.20 a day.

The unions pulled out of the official labor law reform process last month to protest two years of what they describe as fruitless talks with the government and employers to bring Myanmar’s labor laws into compliance with international standards.

“We have to get out and march. We can no longer be patient on this matter,” says Daw Phyo Sandar Soe, CTUM assistant general secretary.

Workers have waged dozens of strikes in recent months, protesting that the laws designed to protect them are broken.

New labor laws enacted in 2011 and 2012 gave workers the right to form unions for the first time in 50 years. Further reforms, including adoption of international labor standards, were promised to incentivize Western investors to do business in the country, where human rights abuses, including forced labor and child labor, have been widespread.

Union leaders fear that promises for further reforms will be broken and that the limited freedoms workers were granted earlier this decade will be largely taken away.

“The parliament doesn’t care about labor issues,” says MICS General Secretary U Thet Hnin Aung. If they failed to listen to worker voices, he added, “we will never vote for them in coming elections.”

CTUM President U Maung Maung says “if Myanmar is to catch up with our Asian neighbors and the rest of the world, we need fair labor laws that can bring us stable industrial relations. Otherwise, international investors will be reluctant to come here.”