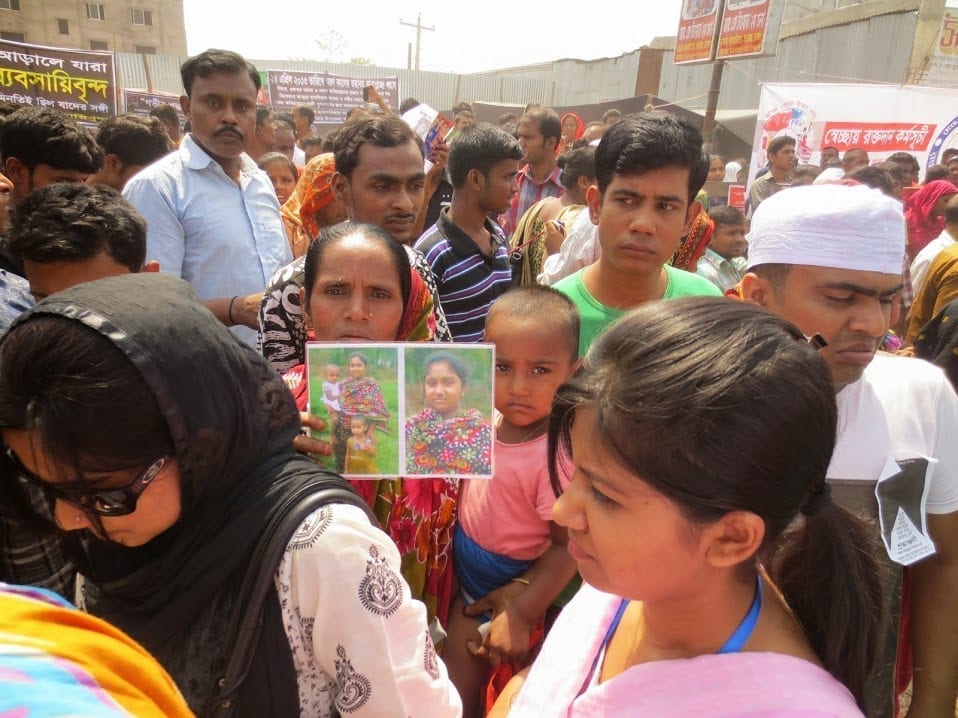 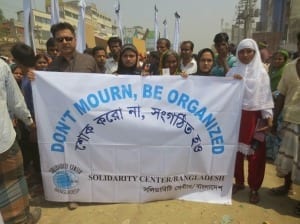 Garment workers are seeking to form unions to change unsafe working conditions like those at Rana Plaza. Credit: Solidarity Center

Thousands of Bangladeshis began gathering before dawn at the site of Rana Plaza, the multistory building that collapsed one year ago today, killing more than 1,110 garment workers and injuring at least 2,500.

Relatives of those killed, survivors of the tragedy and union activists made human chains and marched with banners and signs demanding worker rights, safe workplaces and justice for survivors and the families of those killed. Packing the plaza, marchers carried banners reading, “Pay up, long overdue for Rana Plaza Victims,” and “I don’t want to die for fashion.” Family members held photos of loved ones killed in the unnecessary disaster.

Dalia, a union leader from the Natural Apparels Workers Union (part of the Bangladesh Garment and Industrial Workers Federation, BGIWF) said that the compensation some of the survivors received was insufficient. She also said that families of missing workers should also receive compensation.

Garment workers and union leaders said that a year after the collapse of Rana Plaza, which housed five garment factories, promises made to the families of the victims remain unfulfilled. They called on the government to declare April 24 “labor safety day.”

Trade unions and other civil society organizations held daylong programs to mark the anniversary. Labor organizations placed wreaths at the monument erected in front of the collapsed factory site and the global union, IndustriALL, held a special program as part of its monthlong observance. The local government held a special prayer session as did the Bangladesh Garment Manufacturers and Exporters Association, at its building at Karwan Bazar in Dhaka, the capital.