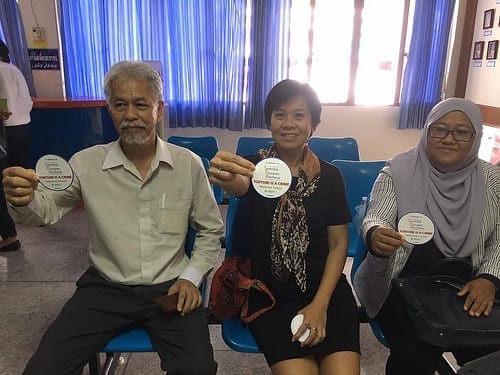 The global labor and human rights communities are urging the government of Thailand to drop charges against three human rights defenders who recently released documentation of torture in the country’s three southern provinces, home to a Muslim and ethnic Malay majority.

A decision by Thailand’s public prosecutor on whether to prosecute Somchai Hom La-or, Pornpen Khongkachonkiet and Anchana Heemmina on criminal defamation and computer crimes is expected any day. The charges carry a maximum penalty of seven years’ imprisonment plus fines of up to 300,000 baht ($8,330).

In May 2016, Thailand’s Internal Security Operations Command filed a complaint against the three, claiming the reputation of the army was damaged by the allegations, and alleged the human rights activists had not cooperated with authorities to provide more information on the cases raised in the report.

“The charges are used to shut up human rights defenders, but we will not back down from exposing rights violations,” Somchai Hom La-or said last year after being charged with defamation.

“For a conflict-ridden region like the deep south, we need to expose human rights violations to bring true peace.”

The global labor and human rights communities are urging the Thai government to drop charges against the three and amend the nation’s penal code to remove criminal penalties for defamation.