Tazreen Survivor, Tahera: I Am Too Afraid to Sleep 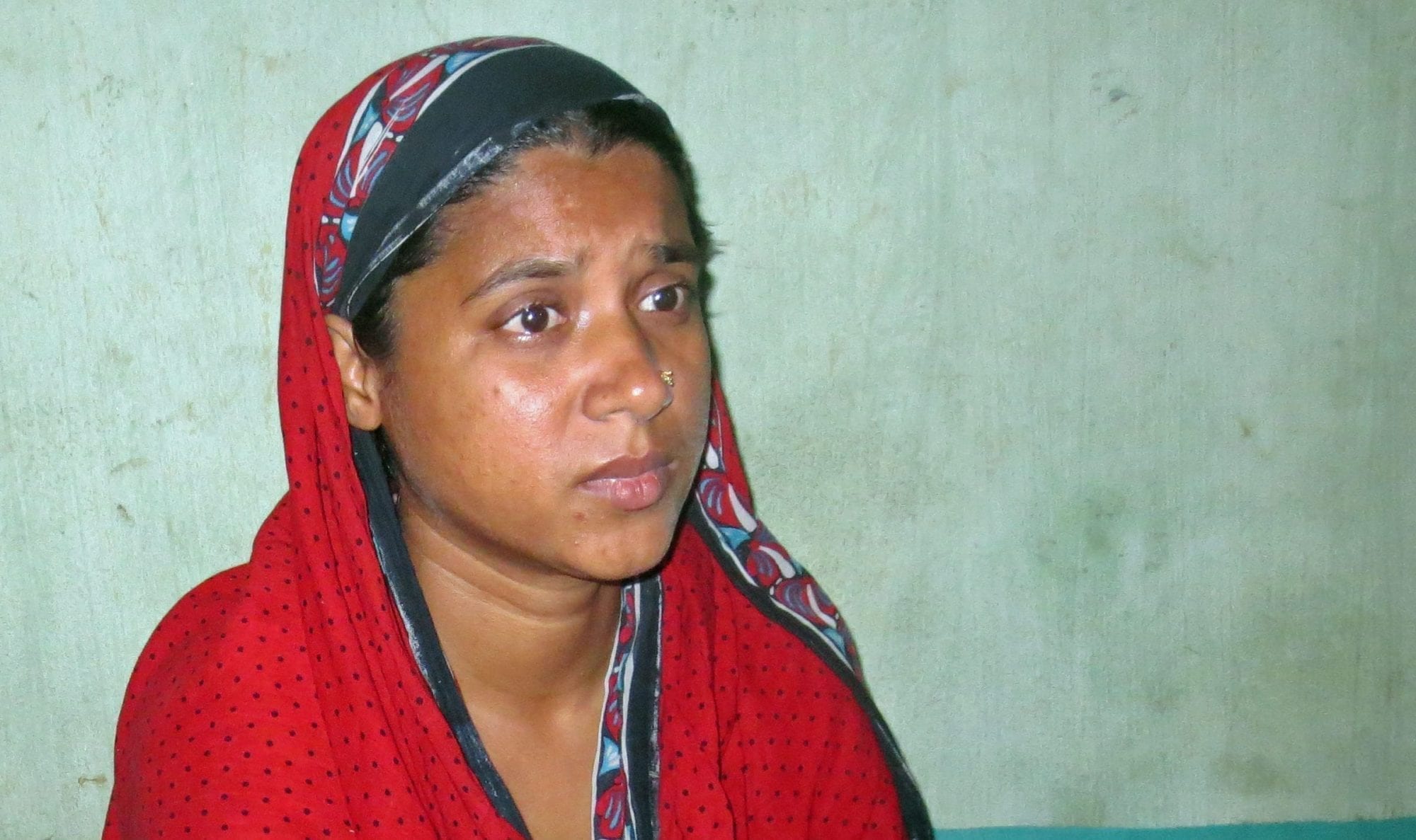 Tahera, 23, has been so ill from the injuries she sustained in the November 24, 2012, Tazreen Fashions factory fire, her husband Roshidul has had to quit his job to take care of her. Now, they have no income to support their family of four.

The blaze, which spread through the multistory factory outside Dhaka, the Bangladesh capital, killed 112 workers and injured thousands more. Like nearly all Tazreen survivors, Tahera jumped out of a window to escape the flames because the stairwells were locked.

“I have severe pain in my whole body,” Tahera said, crying. “I don’t feel any strength in my body now. Although one year has been passed, I can’t sleep properly because of fear. I try to forget the memory of the Tazreen’s fire accident, but I can’t. Sometimes it seems to me that I will not live any longer.”

Her physical injuries are severe, as are her mental and psychological suffering. As panicked workers broke windows and ripped open air shafts to escape the building, the electricity went out while the blaze spread. Tahera fell in the melee, and her head and chest were trampled.

“Following the fire accident, Tahera behaved abnormally,” says Roshidul. “She used to try to leave the house all the time, even at night. I used to sleep in front of the door of house so that she could not wander out. Following the accident at Rana Plaza, she used to cry loudly watching those scenes on television and, even one year after the accident, whenever my wife watches any scene of fire on television she becomes so scared she cries.” In the Rana Plaza disaster, more than 1,200 garment workers were killed April 24, 2013, after the multistory building housing five garment factories near Dhaka collapsed.

“Even now, I can’t remember any one’s name, sometimes nothing,” Tahera said.

Tahera and her husband are borrowing from shopkeepers to survive and do not know how they will pay rent for their home in Savar, near Dhaka. “Our present financial condition is very poor, which it was not before the accident,” said Tahera. They have a 14-year-old daughter and 2-year-old son, but Tahera says, “I can’t pay the tuition fees of my daughter, I can’t buy milk for my little son and I can’t remember anything.”

Roshidul said nearly all of the money they received for Tahera’s injuries from the Bangladesh Garment Manufacturing and Exporting Association (BGMEA) was spent on her medical care. He also used up his savings for her treatment. Now, there is no money left. “I haven’t been able to take her to the doctor or buy medicine for her treatment for the last two months,” he said.  Tahera and her husband say families like theirs have been forgotten.

Tahera came to Dhaka nine years ago, hoping to better her life. Now, all she wants is enough support to get medical treatment and ensure her family has a place to live and food to eat.