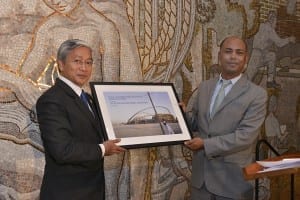 The Building and Wood Workers’ International (BWI) and its affiliates received the 2014 AFL-CIO George Meany-Lane Kirkland Human Rights Award in a ceremony last night in Washington, D.C., where they were honored for their work in bringing justice to construction workers worldwide, specifically for the migrant workers whose labor makes global sporting events possible.

“Your leadership has been tireless, and your campaign has shed light on the dangerous and exploitive working conditions of migrant workers,” said AFL-CIO Executive Vice President Tefere Gebre as he presented the award to BWI General Secretary Ambet Yuson. “Together with your affiliates, including unions here in the United States, and with the International Trade Union Confederation, you have pressured governments, international sports governing bodies and the brands that profit from these events to change conditions on the ground.”

In announcing selection of BWI for the annual award last spring, the AFL-CIO Executive Council said in a statement that “BWI’s affiliates organize campaigns and establish agreements between unions in origin and destination countries, and ensure equal pay for equal work, regardless of workers’ country of origin.”

All countries given the honor of hosting a world premier sporting event such as the Olympics and the World Cup, the council said, “must be held to the highest standards when it comes to supporting international labor rights.”

In accepting the award, Yuson said, “There is a resurgence of vitality in the labor movement. This is credited to immigrant and migrant workers who are building a more dynanmic and strong labor movement.”

Abdeslam Ouaddou, the former captain of Morocco’s national soccer team, spoke about the need for migrant worker rights, telling the audience, that “a country without trade unions is a very bad place to work.”

Ouaddou is now forming an organization to assist migrant workers and urge sports teams to take a stand against inhumane treatment of workers. “We cannot play in stadiums where workers are exploited and blood has been spilled.”

The award went to the International Domestic Workers Federation in 2013 and, in 2012, to the Tunisian General Union of Labor (UGTT) and the General Federation of Bahrain Trade Unions (GBFTU)—two unions whose struggles were emblematic of labor’s role in the uprisings that year. 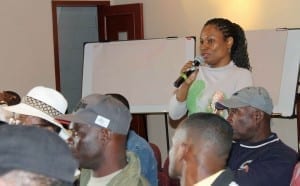 The Qatar Foundation’s guidelines for treatment of migrant workers would cover many construction workers in the nation to set up the 2022 World Cup.

The 2022 World Cup competition in Qatar may be nine years away, but the tiny nation is already making plans to improve the country’s infrastructure and image. While Qatar still has a long way to go in meeting international labor standards, especially when it comes to migrant workers, there are already some encouraging signs coming out of the country.  The Qatar Foundation recently unveiled a set of detailed standards for the treatment of the potentially hundreds of thousands of migrant workers hired by the foundation, its contractors, and all subcontracting agencies to build the infrastructure for the event.

In doing so, the foundation expresses its goal to “initiate a snowballing process towards transforming workers’ quality of life and…set an exemplary model for ethical treatment of workers nationwide.”

More than 1 million new migrants are expected to travel to Qatar seeking construction work and other jobs created by the World Cup. They will join 1 million migrants already in the country who have contributed to transforming Qatar into an economic giant, most visible in the evolution of the nation’s skyline from an empty expanse to one filled with opulent skyscrapers. Despite Qatar’s extreme wealth and economic advancement, migrant workers have labored in a system that denies them core worker rights, including the right to form unions.

Migrant workers are frequently forced to live and work in unsafe and miserable conditions, deprived of time for rest and pressured into accepting contracts that underpay the hours they work.

The Qatar Foundation’s Mandatory Standards of Migrant Workers’ Welfare for Contractors & Sub-Contractors is a significant step forward, says Nader Tadros, Solidarity Center Middle East and North Africa regional program director. “We commend the foundation for following through on the country’s international promises to protect migrant workers and improve working conditions. Despite the need for continual improvement, we see this as a positive step in the right direction as the country begins construction efforts for the 2022 World Cup.”

The 51-page document lays out lengthy rules for acceptable treatment and conditions for migrant workers, including regulations prohibiting workers from being charged recruitment fees to obtain work and mandating that all migrant workers receive training on their rights under Qatari law. The regulations further stipulate that all contracts and training materials be provided in the workers’ own languages and that workers retain their passports while in the country.

Since 2009, the Solidarity Center has assisted Qatari civil society organizations in their efforts to improve the lives of migrant workers. Lending expertise to the Qatari National Human Rights Committee (QNHRC) and the Qatar Foundation to Combat Human Trafficking (QFCHT), the Solidarity Center has served as a resource for Qataris looking to advance working standards for migrant workers.