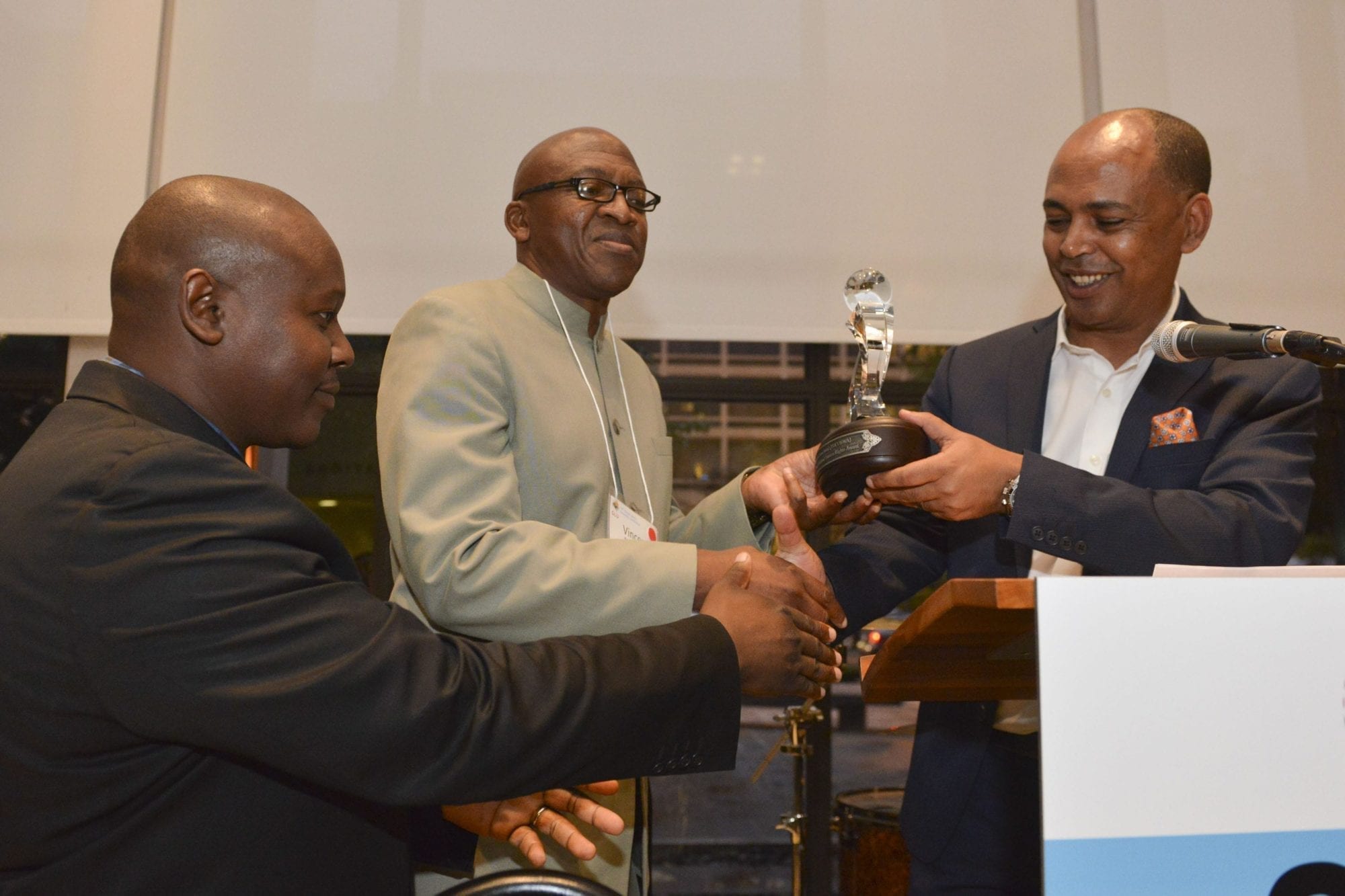 Over the past year, Swazi workers have not been deterred from taking part in union meetings even though the gatherings were repeatedly broken up by police. They turned out in large numbers for the annual May Day rally, although they were threatened with arrest if they did so. And they took all these actions in an environment in which unions were banned and free speech squelched.

For their bravery in standing up for their rights, Swazi workers and their union, the Trade Union Congress of Swaziland (TUCOSWA), last night received the AFL-CIO’s 2015 George Meany-Lane Kirkland Human Rights Award, which recognized “the courage and persistence of Swaziland’s workers in demanding their rights,” the AFL-CIO said in a statement announcing the award.

More than 200 union allies and supporters, including participants of the Global Labor University conference, packed the AFL-CIO lobby in Washington, D.C., for the honors ceremony, with TUCOSWA Secretary General Vincent Ncongwane and TUCOSWA Treasurer General Patrick Mamba accepting the award on behalf of the union and Swazi workers.

“Labor never quits,” Ncongwane said, accepting the award. “We never give up the fight, no matter how tough the odds, no matter how long it takes,” he said, quoting former AFL-CIO President George Meany.

Speaking at the event, Jos Williams, president of the AFL-CIO Metropolitan Washington Labor Council, described his experience as part an International Trade Union Confederation (ITUC) fact-finding delegation to Swaziland in May. Members of the delegation were moved to tears during their meeting with families of imprisoned human rights leaders, Williams said.
“I saw tough freedom fighters with tears in their eyes once they heard from their families.”

Since the U.S. government suspended Swaziland’s participation in the African Growth and Opportunity Act (AGOA), the country also has freed imprisoned human rights advocates but it has not yet repealed anti-terrorism laws that enable it to imprison union leaders and others who call for human rights and democracy.

At a briefing on working conditions in Swaziland at the Solidarity Center, Ncongwane noted that the loss of trade benefits has impacted thousands of workers, especially in the textile sector, who have been laid off.

Speaking last night, Ncongwane said “we are working tirelessly to press for reforms that will put our country on a more secure footing to restore these jobs and to restore job opportunities. The greatest threat to jobs and growth in Swaziland does not come from unions, but from our government’s lack of foresight, lack of vision and mismanaged policy decisions.”

Ncongwane emphasized the positive impact of global labor solidarity which, in publicizing the government’s actions, has enabled the union to operate with some measure of freedom.

“We will utilize our institutional strength to impact and press for change but we need our international partners in the global labor movement to maintain support for workers’ rights and for greater democracy in Swaziland, especially now when we are as close as we’ve ever been to real reform in years,” he said.

Last year, the Building and Wood Workers’ International (BWI) and its affiliates received the award and the International Domestic Workers Federation (IDWF) received it in 2013. In 2012, the award went to the Tunisian General Union of Labor (UGTT) and the General Federation of Bahrain Trade Unions (GBFTU)—two unions whose struggles were emblematic of labor’s role in the uprisings that year.