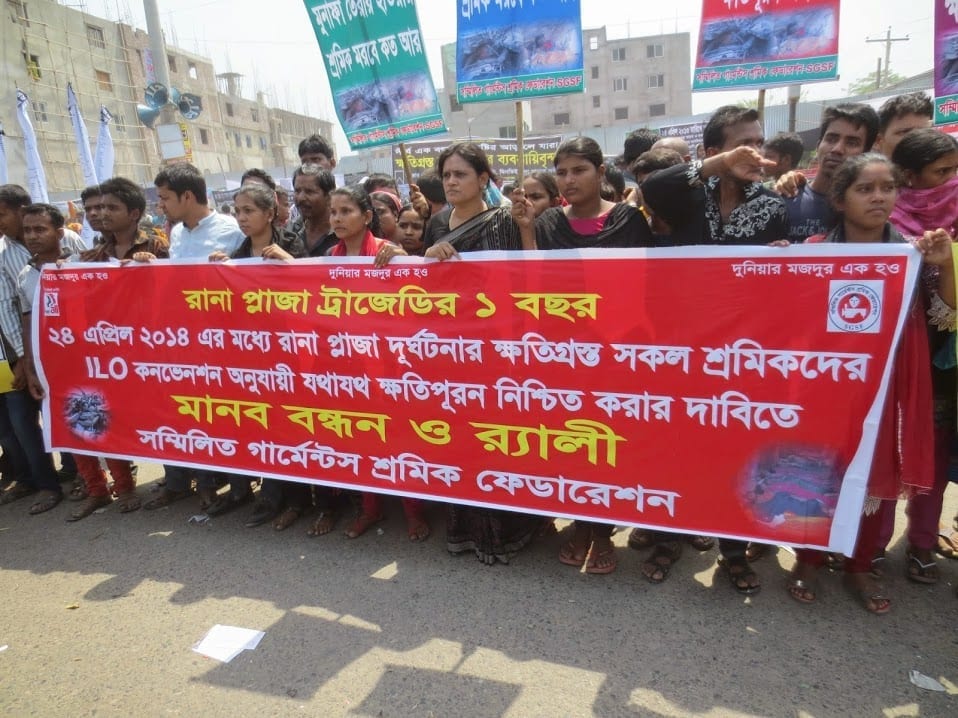 Each year on December 10, the global community marks International Human Rights Day, anchored in the founding document of the United Nations which asserts that each one of us, everywhere, at all times is entitled to the full range of human rights.

That founding document, the Universal Declaration of Human Rights, also lists “the right to form and to join trade unions” as a basic tenet of human freedom. For many workers around the world, the right to form unions is essential for ensuring the safe working conditions and living wages that are fundamental to human rights.

Two years ago, on November 24, the devastating fire at the Tazreen Fashion Ltd. garment factory in Dhaka, Bangladesh, killed 118 workers, the majority of them young women. Commentators at the time compared the disaster to the 1911 Triangle Shirtwaist Fire in New York, noting that moment in American labor history when young women garment workers began organizing their first unions.

The same phenomenon is taking root in Bangladesh, and for the same reasons. The momentum for union formation was accelerated by the April 2013 Rana Plaza building collapse in Bangladesh, which killed more than 1,100 workers. Following these twin tragedies, workers, primarily women, formed more than 200 new garment unions. Their rapid formation has been driven by the determination of women workers who have experienced how the past 30 years of job creation has not led to their economic or social advancement. They seized the moment to collectively join together to demand that jobs offer more than a meager paycheck.

It has been a nostrum of development economics for the past 20-plus years that merely creating garment-sector jobs was the key to women’s liberation and empowerment. True, approximately 80 percent of workers employed in the Bangladesh’s garment sector are women. True, millions of women now have an independent means of earning an income, which is important to raising women’s status within their family and community.

However, few adherents to this economic analysis have examined whether creating low-wage jobs has truly led to women’s empowerment in a way that is personal, cultural, sustaining or lasting. Rather, many economists and political scientists view Bangladesh and the global garment supply chain through a purely free-market perspective. Through this lens, any wages at all enable women to improve their status. Yet it is much more difficult to acknowledge that the real issue is the global supply chain within which women need to exert their power and genuinely take control of their own destinies inside and outside the home.

Statistical evidence suggests that women toiling at the bottom of the global garment supply chain in Bangladesh do, in fact, experience some social changes in contrast to women working in a subsistence agrarian economy. Research shows that a 10-hour-a-day, six-days-a-week job in the Bangladesh garment industry may improve women workers’ chances to send their children to school and keep them in there longer. However, these arguments are oversold. Women garment workers may or may not control their wages, depending upon gender-based power relations inside their homes. Often, they do not favor women.

Over the past 17 years that I have been involved with the Bangladesh labor movement, I have repeatedly seen how an income does not guarantee independence for a woman garment worker. This anecdotal evidence is backed up by fact. Research suggests that girls age 17 and 18 years old who live near garment factories actually drop out of school at a higher rate than their rural counterparts who go to work in the industry. Further, a 2009 study by the Bangladesh government’s National Bureau of Economic Research documents that non-garment workers’ mothers had a higher level of education than those of garment workers. And farm labor actually pays more than a job at a garment factory in the high-cost, high-inflation environments of Dhaka or Chittagong, according to a recent article in Dhaka’s Financial Express.

So if the one-dimensional argument that earning a wage results in women’s empowerment is fiction, what is the manifestation of real progress for women?
For the answer, I would point to prominent labor activists who have risen from the factory floors and now are organizing among their peers.

Kalpona Akter, Nazma Akter (no relation) and Nomita Nath, for example, all worked as child laborers in garment factories. They have emerged as real leaders, not because they made poverty wages as teens but because they dedicated their lives to uplifting the status of women workers in their society. They have found their power in fighting for jobs that do not starve, maim or kill women. And they know that vulnerable workers find empowerment when they have a union to represent them.

Workers struggle every day on Bangladesh’s factory floors. Women report that physical and verbal abuse are a matter of course. They are threatened when they do not make a quota or when they get pregnant. Or worse. Mira Boashak, president of a local union in Dhaka, was severely beaten in August by several men who had staked out her garment factory.

Despite these challenges, a young organizer told me earlier this year in Dhaka that prior to recent tragedies, her efforts to organize women into unions made her community think she was a troublemaker.  Now, she said, she is seen as a champion of women’s rights and looked up to as a leader.