South African Fights for a New Generation of Domestic Workers 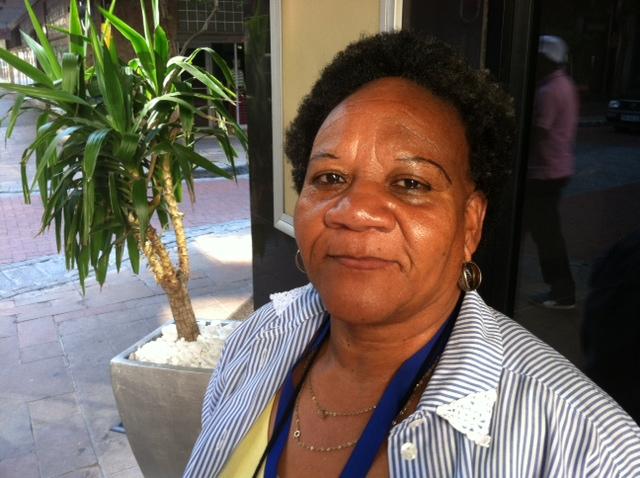 Gladys Mnyengeza has been a domestic worker in Cape Town, South Africa, for about 40 years—and knows full well the problems and rewards that come with a job traditionally undervalued and performed by workers at the margins of society. Her experience has made her a tireless advocate for the rights of domestic workers.

Although Mnyengeza’s work involves juggling schedules and long hours, she also finds time to serve in a leadership position for her union, the South Africa Domestic Service and Allied Workers’ Union (SADSAWU). As a union leader, she is tasked with raising awareness among a new generation of domestic workers about their rights on the job and is helping lead her union in a restructuring process to make it a more effective advocate for a traditionally marginalized group of workers.

Mnyengeza first learned about SADSAWU in 2008 when she sought assistance over a pay issue at South Africa’s Commission for Conciliation, Mediation, and Arbitration, a government agency charged with mediating labor disputes. “I went [to SADSAWU] and I joined that same day,” she said.

The pay issue was resolved, but the stress and tension had an impact on Mnyengeza. She resolved to play a bigger role in SADSAWU to help domestic workers recognize their legal rights and not be intimidated when employers treat them unfairly. As the deputy chairperson of SADSAWU’s Cape Town Branch, she regularly meets with domestic workers in SADSAWU’s office and talks with workers at bus stops and other public places to recruit them into the union. According to Mnyengeza, there was a time when cultural taboos prevented domestic workers from speaking out about workplace issues. Today, despite legal protections and advocates like SADSAWU, many workers still hesitate to speak out about poor job conditions.

“I know they have problems but they don’t want to talk. I know that,” she said. “They come to SADSAWU just to talk about their work, but when they see that we can solve problems, they want to join.”

SADSAWU’s leadership, including national, provincial and local-level leaders like Mnyengeza, met in Cape Town November 15-17 to develop an interim plan to restructure the union, which has struggled in recent years. The Solidarity Center facilitated the meeting, along with the Gender Committee of the Congress of South African Trade Unions (COSATU). SADSAWU developed a draft constitution at the meeting and crafted a one-year interim plan for restructuring. The plan’s success relies on leaders like Mnyengeza and a new generation of domestic worker leaders across the country.

“My hope is to bring SADSAWU back on top where it needs to be,” Mnyengeza says. “We have so many people who are ready to join the union, they are really coming on.”