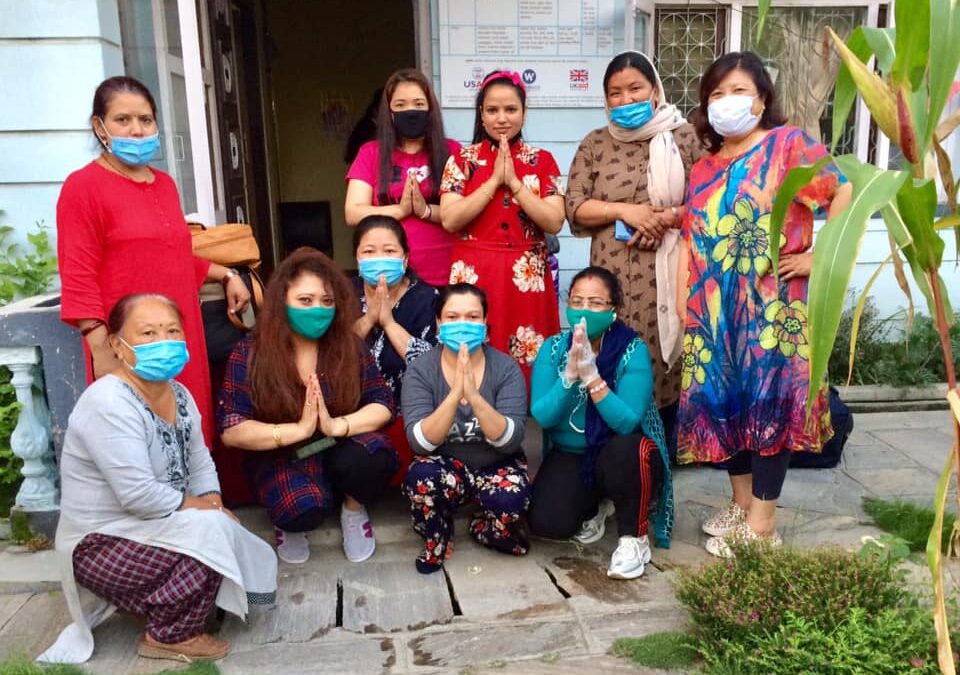 In Nepal, AMKAS, a Solidarity Center partner, is providing essential assistance to migrant workers returning after losing their jobs or income during COVID-19. Credit: AMKAS

In the wake of the COVID-19 pandemic, millions of migrant workers have been forced to return to their homes or are languishing in their destination countries without jobs, and Nepali migrant workers are no exception.

In 2019, Nepal’s Department of Foreign Employment issued 236,208 labor permits for migrant workers, 8.5 percent of which were issued to women. As the pandemic spread, work in major destination countries for Nepali workers in Kuwait, Malaysia, Qatar, Saudi Arabia and the United Arab Emirates also came to a halt. Sudden job loss and pay cuts pushed migrant workers into precarious positions. The government’s decision to cancel all international flights to contain the spread of the virus added to their stress and uncertainty. The nationwide lockdown began March 24.

After more than two months, the Nepal government’s repatriation plan came into force. The government arranged to hold returning migrant workers in quarantine centers in Kathmandu until their respective provinces arranged departure to their home districts. On the first repatriation flight, 306 women, all previously working as domestic workers and granted amnesty by the Kuwaiti government, landed in Nepal in June.

Bijaya Rai Shrestha, founder and chairperson of Aaprabasi Mahila Kamdar Samuha (Returnee Migrant Women Workers Group, AMKAS) in Nepal, knew she had to help. “I could hear my inner self telling me that I have to step up to do my part to support these sisters,” she says. The first flight from Kuwait landed while AMKAS was navigating the procedures and formalities to get authorization to host returnees at its shelter. After 12 hours, they received approval—and later that evening, they were notified 10 women were headed their way. The shelter has capacity for 15 women following quarantine procedures.

Reaching Migrant Workers and Relating to Their Pain

AMKAS—created, led by, and working for migrant workers to make migration safe and dignified—advocates for the rights of migrant women workers and provides them with a variety of services. It is a Solidarity Center partner.

“On the first day, around 8 p.m., I received the message that 10 sisters from Kuwait would be brought to our shelter. I had no clue that they would come that late. My team had already gone home. I could no way to request that they postpone bringing the sisters the following morning. I still remember in my quivering voice I said, ‘Yes, please bring them!’” she says. That night, Bijaya booked a hotel near the shelter so the women had a place for the evening. They came to the shelter the following day. Despite insufficient resources to support the influx of women, Bijaya says the humanitarian need outweighed the obstacles.

Complicating the return and reintegration of the workers is the stigmatization that they might be virus carriers. Her landlord wanted her to move operations. He sent the police, then the Nepal Army, but their paperwork was in order. The soldiers, she says, “thanked us for the work that we are doing and requested the neighbors to extend their cooperation to us.”

AMKAS has successfully hosted 109 women in different groups. The organization books other returning women into a hotel near the shelter.

I was also a migrant worker,” Bijaya recalls. “From the beginning of the pandemic, I could relate to the pain that thousands of women were going through. She adds, almost all women who we hosted were not paid for up to six months. Returnees must cover the cost of travel to their home district.

Chandra Maya BK, a returnee migrant from Kuwait says, “I do not have the 1,500 rupees (approximately $13) to return to my home district. This explains how much I wish to get my six months pay that is due. At the shelter, I learned that the government has some loan provisions and legal aid facilities for us. Help me get my pay, I can start something on my own.”

At present, the shelter is at capacity with returned workers waiting out their 15-day quarantine [and test results]. The organization also serves other returned migrant workers for whom AMAKS helped find positions but who are also jobless because of the pandemic.

“We couldn’t leave them to survive on their own,” says Bijaya. “Masks are in need, so we managed to provide 30 returned workers with virtual mask-making training. After the training during those strict lockdown days, we delivered sewing machines along with the raw materials to all of them,” she says. The women are making masks and AMKAS is helping them sell them online.

AMKAS is planning an awareness program covering various aspects of the government’s reintegration provisions, legal aid, migration cycle and trafficking at the shelter and also at the community level, with support from the Solidarity Center.